St. Paul, a miracle, and the first Christian community on the Italian peninsula 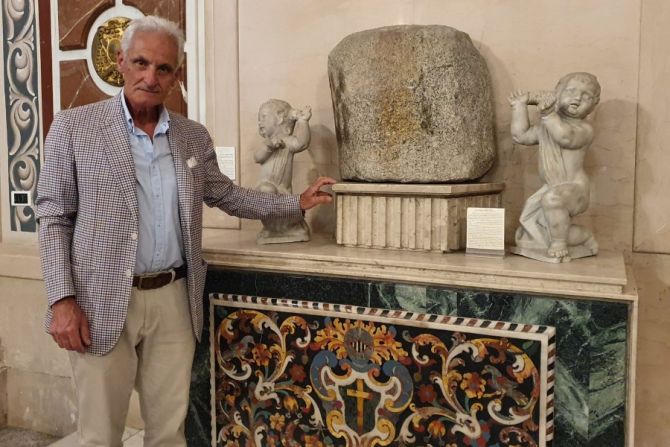 Renato Laganà with the relic of the burning column. | Hannah Brockhaus/CNA

The imprisonment of St. Paul in Rome, and his eventual martyrdom, are well-known. But days before the apostle set foot in the capital of the Roman Empire, he landed on another city's shores -- and in one miraculous night he established the Christian community on the Italian peninsula.

Reggio Calabria, a city on the southernmost tip of Italy, preserves the relic -- and the legend -- of St. Paul and the burning column.

In its final chapters, the Acts of the Apostles recounts the harrowing journey of St. Paul from Ceasarea to Rome in A.D. 61.

After three months on the island of Malta following a shipwreck, St. Paul and those traveling with him again "set sail," first stopping for three days at Syracuse -- a city in modern-day Sicily -- "and from there we sailed round the coast and arrived at Rhegium," Acts 28:13 states.

Scripture does not elaborate on what happened during St. Paul's one day in the ancient city of Rhegium, now Reggio Calabria, before he set sail again for Puteoli, and finally, Rome.

But the Catholic Church in Reggio Calabria has preserved and transmitted the story of what happened on the apostle's single day and night in the ancient Greek city.

"St. Paul was a prisoner, so he was brought here on a ship," Catholic layman and retired architect, Renato Laganà, told CNA. "He arrived in early morning in Reggio and at a certain point, the people were curious that he was there."

There is evidence Rhegium, or Regiu, was inhabited by Etruscans, who worshipped the Greek gods. According to Laganà, there was a temple to Artemis nearby and people were celebrating the feast of the goddess.

"St. Paul asked the Roman soldiers if he could speak to the people," Laganà recounted. "So he began to speak and at a certain point they interrupted him and he said, 'I will tell you something, now that it is becoming evening, let's put a torch on this column, and I will preach until the torch burns out.'"

The apostle continued to preach as more and more people gathered to hear him. But when the torch burned out, the flame continued. The marble column on which the torch sat, a fragment of a temple, continued to burn, allowing St. Paul to preach about the Gospel of Jesus Christ until dawn.

"And this [story] was transmitted to us over the course of centuries. The most prestigious historians, scholars of Church history reported it as the 'Miracle of the Burning Column,'" Laganà said.

The Reggio local is a member of the archdiocese's commissions for sacred art and the Cathedral Basilica of Reggio Calabria, which now holds the remaining relic of the "burning column," as it is called.

Laganà told CNA he has had a fascination with the column since his childhood, when he attended a Mass at the cathedral for the 19th centenary of the coming of St. Paul, celebrated in 1961.

When St. Paul departed from Reggio, he left behind Stephen of Nicea as the first bishop of the brand-new Christian community. It is believed St. Stephen of Nicea was martyred during the persecution of Christians by Emperor Nero.

"With the persecution by the Romans in that period, it was not very easy to carry on the Church in Reggio," Laganà said. He explained that the foundation of an ancient temple became the first Christian church, and St. Stephen of Nicea was first buried there.

Later, however, the saint's remains were brought to a place outside the city, now unknown, to protect them from desecration, he said.

Over the many centuries, different churches were built and destroyed, both by violence and earthquakes, and the miraculous column was carried from place to place. Existing documents from the 18th century onward trace its movements and the construction of the city's various cathedrals.

The section of stone column has been in a chapel on the right side of the nave of the cathedral basilica since the church was rebuilt after a devastating earthquake razed the city in 1908.

The marble relic was also damaged in one of the 24 Allied air raids carried out on Reggio Calabria in 1943. When the cathedral was hit by bombs, a fire started which left the column with visible black marks.

The city's archbishop at the time, Enrico Montalbetti, was also killed in one of the raids.

Laganà said through all this, the city's devotion to St. Paul never waned. One of Reggio Calabria's traditional annual processions, in which an image of Our Lady of Consolation is carried through the city, always includes a moment of prayer at the spot believed to be where St. Paul preached.

The legend has also been the subject of many paintings and sculptures which can be found in the city's churches.

These recurring images are a sign that "the miracle of the burning column is really part of the structure of the faith of Reggio Calabria," Laganà said.

"And, naturally, St. Paul is the patron of the Archdiocese of Reggio Calabria," he added.

"So, it is an attention which remains..." he continued. "Even if many people do not understand, it is our task to help them understand, to explain, to carry forward this part of the tradition, which can help increase the faith in our population."

He noted that "clearly Rome, with the martyrdom of Saints Peter and Paul, became the center of Christianity," but added that "Reggio, with the miracle of St. Paul, has tried to call just a little attention to the establishment [of Christianity] and continue what is at the core of the message St. Paul had."