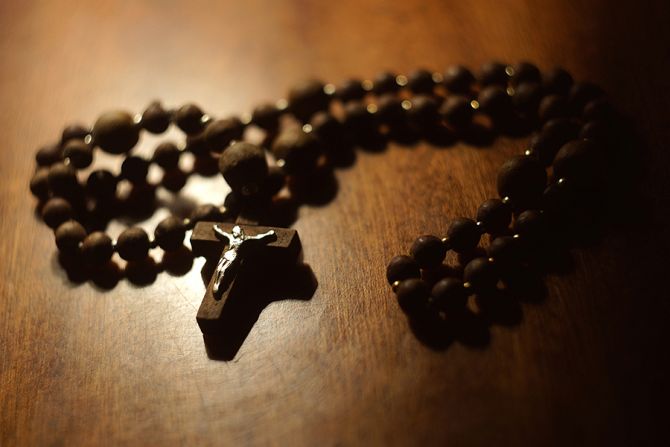 Archbishop Eamon Martin had been thinking about the rosary ever since the pandemic broke out. In previous times of adversity, Irish Catholics had turned to the devotion. Could that tradition be revived now?

In early September, the archbishop of Armagh met a group of Missionaries of Charity who live near his cathedral. They told him about their founder's love for the rosary.

"One of the sisters introduced me to that beautiful quote from Mother Teresa where she says: 'Cling to the rosary as a creeper clings to the tree,'" he told CNA Oct. 9.

The Primate of All Ireland decided to launch a nationwide Family Rosary Crusade, encouraging Catholics to pray the rosary daily in October against COVID-19.

He said: "There's one thing about Mother Teresa: when you see her, she's often holding the rosary. That idea of clinging to the rosary was something that I thought I would offer out to the people of Ireland, and indeed beyond, during this month of October."

The initiative, which uses the hashtags #FamilyRosaryCrusade and #OctoberFamilyRosary on social media, has been taken up enthusiastically by prayer groups in Ireland.

The archbishop said that the crusade built on a movement he helped to launch in January called the 1 in 10 Rosary Mission, which aims to encourage 10% of the Irish population to pray the rosary daily.

"It has been quite successful so far," he said. "And of course, it builds on the great tradition of other Irish priests, like Fr. Patrick Peyton, and the Legion of Mary and the work of Frank Duff to promote the holy rosary as not just a personal prayer, but also as a communal prayer, and in particular as a prayer for families."

Martin explained that he wanted to remind people of the idea that the rosary is like a shield, or a breastplate on a suit of armor, putting those who pray it under the protection of Mary and Jesus.

He said: "I know Pope Francis was keen to have us reflect on Mary as a comforter of the afflicted and Mary as the health of the sick whenever he was giving his big Urbi et Orbi address in the springtime. I think, again and again, of that idea that, through our sorrows and our difficulties, Mary walks with us and that she can accompany us -- that's the message I'm trying to get across."

Amid rising COVID-19 cases, the Irish government has once again asked churches to suspend public Masses. This has created a curious situation in the Archdiocese of Armagh, which straddles the border between the Republic of Ireland and Northern Ireland.

Stranger still, there is a parish in his diocese with churches both north and south of the border, so only a portion of parishioners are officially permitted to attend public Masses.

Martin and the three other Catholic archbishops of Ireland have requested a meeting with Taoiseach Micheál Martin to seek the restoration of public worship in all parishes.

The archbishop said he decided to call specifically for a family rosary crusade because the suspension of public Masses had revealed the vital importance of the "domestic church."

"I do feel that these days of COVID have really put the spotlight on the little church, the domestic church, the church of the sitting room, the church in the kitchen … the church that meets in the family home. And I think the rosary is -- and has always been in Irish tradition -- a fantastic prayer for the family."

He praised other groups promoting the rosary, including Rosary on the Coast Ireland, Radio Maria Ireland, and EWTN Ireland. He added that Catholics all over the world were invited to join the Family Rosary Crusade this month.

Martin hopes there will be a similar turn towards the rosary amid the challenges of the coronavirus crisis.

Asked if he had any reservations about calling the new initiative a "crusade" -- a word rarely used in Church circles today -- he said that he had thought about it and decided it was fitting.

"The Legion of Mary tended to use that idea of 'the battle,' the spiritual battle, and I have no difficulties with that, used in the best sense of the word -- that this is actually something that we are engaged in to confront what are huge difficulties for people at the moment in the world," he said.

"And I don't make any apologies for the term, but of course I'm not using it in any kind of hurtful manner, but trying to tap into this idea that it is something that we are encouraging people to join -- and to join in bigger numbers -- and to spread the word."

He observed that he was just the latest in a long line of priests and bishops to promote the rosary, recalling that recent popes had also stressed the importance of the devotion.

"If you think of some of the very profound things that Pope Benedict, Pope John Paul II, and others have said in recent times -- about the rosary and how it allows us to enter into the mysteries of our faith, the story of salvation history -- it places Christ at the center. It looks on these mysteries through the eyes of Mary," he said.

"I have no difficulties in rekindling the interest in and, hopefully, the comfort that people can find by praying the rosary, either individually or together." In virtual rosary, US bishops ask Mary to intercede for America

Archbishop Jose Gomez of Los Angeles, president of the U.S. Conference of Catholic Bishops (USCCB), led a ‘virtual rosary’ Wednesday with several other bishops, asking Mary to intercede for the United States. 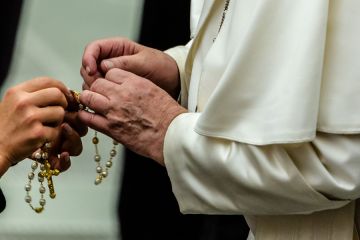 On St. Joseph's feast, Italy to pray rosary for protection from coronavirus

On the Solemnity of St. Joseph, the protector of families and the Church, Catholics in Italy will pray the rosary together from their homes for protection from the coronavirus. Pope Francis will pray the rosary in the Vatican Gardens’ Lourdes grotto on Saturday, as Catholic shrines from around the world join via video streaming.