Guest ColumnistSt. Thomas Aquinas, a corpulent man nicknamed the dumb ox shows us how to live for Jesus 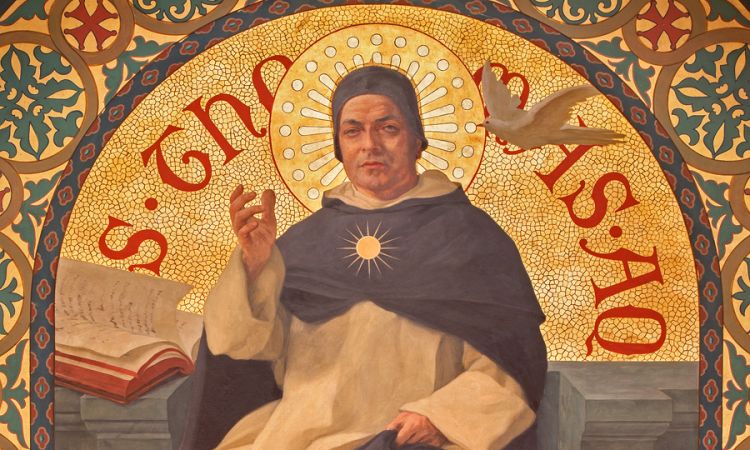 On January 28th, the Catholic Church commemorates the great Western theologian, St. Thomas Aquinas. As I grow older, the sheer magnitude of the gifts the Lord gave to this man become clearer and clearer in their significance for the Church. I also marvel at his return on the Lord's investment, through his cooperation with grace. Finally, I grow in my appreciation of his humanity. In fact, it gives me great hope in my own weakness.

During graduate theology studies, I tried to attend Holy Mass daily. The images of Thomas Aquinas in the little chapel in the classroom building brought to the forefront something which I share with him in my lifelong struggle with obesity, his real girth. He was, to be kind, corpulent of body. But, more importantly, he had a huge heart and an extraordinary mind which were given over with passion to the Lord Jesus Christ and the mission of of His holy Church.

Thomas Aquinas gives me the hope I need as I try to offer myself more fully to the Lord and His Church in service in these my later years of life. Both by challenging me to dedicate myself fully to theological study, and, more importantly, by inviting me to surrender all I am to Jesus Christ as a son of His Church who is called into the world of this hour.

During his studies, Thomas was nicknamed by his peers the Dumb Ox, both because of his size and the fact that he was slow in speech. Yet, his teacher, St Albert, noted of him "We call this man a dumb ox, but his bellowing in doctrine will one day resound throughout the world." Those words have proven to have been prophetic.

The leaders of the Catholic Church are persistently calling all of the faithful to participate in what is called a New Evangelization. That very urging is a clear recognition of the inescapable fact that many Catholic Christians have not made the Christian faith their own. In some cases, they have not encountered the Lord personally, and, in others, they do not understand the Catholic Christian faith and its implications, at least beyond attending the weekly Liturgy.

The Church, as mother and teacher of all the Lord's faithful, knows that we have to first reach the people in the pews if we ever hope to re-evangelize the whole world in this age which has forgotten God. The whole Catholic Church needs to be re-evangelized! The teaching of Thomas Aquinas is one of the best resources for the task, preparing those who will help in what is now called the New Evangelization, providing them with good theology.

Then, in the continuing mandate to bring the fullness of the Gospel into a culture which has forgotten God, Thomas Aquinas presents us with a model to emulate in our outreach to the Nations. He shows us how to use any system of sincere thought which admits of the existence of God and higher truths, as a framework for presenting the fullness of truth found in Jesus Christ and His Church.

His personal life story should inspire each one of us to find - and then to live - our own specific vocation, as missionaries of Jesus Christ. We are all called to regularly encounter Jesus and to live in the heart of the Church for the sake of the world. We are all called to take our place in the continuing mission of the Church to evangelize all the Nations. (Mark 16:15)

We should expect that living totally for Jesus and participating in such a missionary task will not be easy. Really living a Christian life is increasingly being met with both covert and overt persecution. But, Jesus never promised easy. It will take saints. God is in the business of making saints. All he asks of us is our willingness to say yes to his invitations - and then our willingness to persevere in our specific vocation as Christians. The Lord gives us the grace.

Thomas Aquinas is an example of the pattern of life which we can all live, with appropriate adaptation based upon the specificity of our state in life and vocation. He lived his Christian life in the heart of His Church and offered himself in service to the Lord for His work in the world. That is our task as well.

Born of a wealthy family and educated with the finest the Benedictines had to offer, Thomas was seemingly set on a "career path' of sorts with a foregone conclusion. All, including his family, recognized his extraordinary intellectual gifts. So, when this young man with so much promise decided to take up with mendicants, the Latin word means beggars, those Dominicans who lived on the resources of gifts given by others, he was not greeted with the support of his family.

In fact, they actually kidnapped their son away from this new band of friars who were so suspect among the established Catholics of their age. After a year of trying to dissuade him, they were no match for the young man's resolve to follow the voice of the Lord and pursue his Christian vocation to the Dominican way of life.

He studied in Paris and Cologne under St. Albert the Great, a philosopher of great reputation. The entirety of Europe was caught up in a major time of intellectual ferment and change. The writings of the ancient Greek Philosopher Aristotle had been reintroduced to contemporary Western thought by, of all sources, the intellectual community of the Islamic world.

Already suspect in most circles - and accused of being "Anti-Christian" - the re-presentation of Aristotle by the Muslim intellectuals made this body of philosophical work even more of a threat to many within the Catholic Church in Thomas' day.

As he had done in choosing the way of the Dominicans, when so many thought he was to walk a different road, Thomas rejected the contemporary suspicions surrounding the allegedly contradictory nature of Aristotelian thought and orthodox Christianity. Instead he pursued it with all of his natural and supernatural gifts.

He did so because he loved, above all and everyone else, the Lord Jesus Christ who is the Way, the Truth and the Life. He loved him so much that he had a deep and intimate relationship with him. Thomas became such a great theologian, PRECISELY because he prayed. One of the early monks of the Church, Evagrius of Pontus, once wrote, "A theologian is one who prays and one who prays is a theologian."

Thomas knew that all truth finds its source - and its fulfillment - in the One who is Truth Incarnate, Jesus the Christ. In this way, he was a pioneer of a New Evangelization of his own second millennium and a model for our efforts to do the same in the Third. He was not afraid.

Thomas set about re-presenting the fullness of the Truth which is found within the Catholic faith right within the framework of Aristotelian philosophy. In other words, he used a philosophical framework from his own age to present the eternal truths of the ancient but ever new Catholic faith. That is our task as well as we embark upon what is a new missionary age for the Church!

Using his formidable intellect, sincere and profound faith and solid grounding in the Patristic sources, Thomas produced a body of work which is still the theological and philosophical equivalent of the "gold standard" in the West. His 'Summa Theologiae' became the primary theological textbook for seminarians, theologians and ordinands, those preparing for ordination in the Western Church.

However, Thomas produced more than theology. His poetry and prose inspired some of the greatest liturgical music and piety in the Latin Rite. His holiness has been - and continues to be - the source of countless religious and lay vocations. Holiness is a fruit of a personal, ongoing, intimate and sustained relationship with the Lord.

What is needed in our age are men and women who can, as did Thomas, take the thought of this, the Third Millennium, and use it as the framework for the essential task of building an apologetic for the New Evangelization within the Church. Then, we can fruitfully engage in a great new missionary effort to bring Christian conversion to the contemporary culture. Such men and women, like Thomas, will live their lives in communion with the Lord, because they really pray.They will also love the Church, because they know that it is the mystical Body of Jesus Christ.

On this Feast of the Great St. Thomas Aquinas, let us reflect on these words which he wrote - then and make them our own:

"Whoever wishes to live perfectly should do nothing but disdain what Christ disdained on the cross and desire what he desired, for the cross exemplifies every virtue. If you seek the example of love: Greater love than this no man has, than to lay down his life for his friends. Such a man was Christ on the cross. And if he gave his life for us, then it should not be difficult to bear whatever hardships arise for his sake."

"If you seek patience, you will find no better example than the cross. Great patience occurs in two ways: either when one patiently suffers much, or when one suffers things which one is able to avoid and yet does not avoid. Christ endured much on the cross, and did so patiently, because when he suffered he did not threaten; he was led like a sheep to the slaughter and he did not open his mouth."

"Therefore Christ's patience on the cross was great. In patience let us run for the prize set before us, looking upon Jesus, the author and perfecter of our faith who, for the joy set before him, bore his cross and despised the shame."

"If you seek an example of humility, look upon the crucified one, for God wished to be judged by Pontius Pilate and to die.If you seek an example of obedience, follow him who became obedient to the Father even unto death. For just as by the disobedience of one man, namely, Adam, many were made sinners, so by the obedience of one man, many were made righteous."

"If you seek an example of despising earthly things, follow him who is the King of kings and the Lord of lords, in whom are hidden all the treasures of wisdom and knowledge. Upon the cross he was stripped, mocked, spat upon, struck, crowned with thorns, and given only vinegar and gall to drink".

"Do not be attached, therefore, to clothing and riches, because they divided my garments among themselves. Nor to honors, for he experienced harsh words and scourgings. Nor to greatness of rank, for weaving a crown of thorns they placed it on my head. Nor to anything delightful, for in my thirst they gave me vinegar to drink."

Saint Thomas Aquinas, pray for us!