Father Emil Kapaun’s cause for sainthood to be officially opened 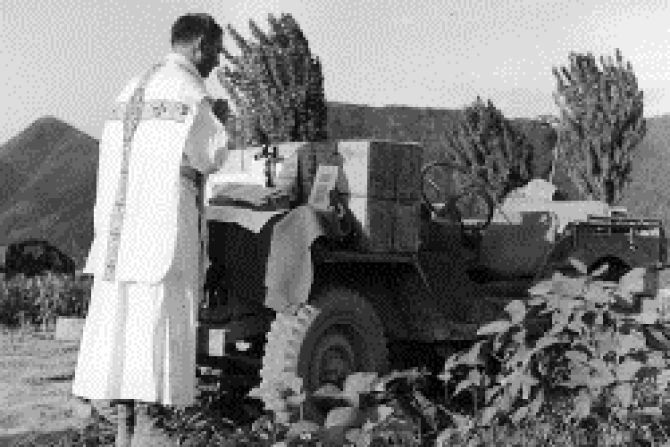 Father Kapaun celebrates Mass on the hood of a jeep.

The Cause for the Canonization of Father Emil Kapaun, an Army Chaplain who died while in a North Korean Prisoner of War Camp in 1951, will be officially opened on June 29.  Father Emil Kapaun, a native of Pilsen, was ordained for the Catholic Diocese of Wichita on June 9, 1940. After serving as a priest in the diocese, Father Kapaun asked to be allowed to serve as a U.S. Army chaplain.

On June 29, Bishop Michael O. Jackels will be the celebrant of the 10 a.m. Mass in Pilsen, Kan., Father Kapaun’s home town. After the celebration of the Mass, a short ceremony will take place in which the officials of the diocesan canonization process will take their oath of ofﬁce and the Father Emil Kapaun’s Cause for Sainthood will be ofﬁcially opened.

Upon his return after the war, Father Kapaun studied at Catholic University of America and served once again in the Diocese of Wichita. Answering the Army’s call for chaplains, Father Kapaun once again asked to be released from diocesan work to serve another tour in the Army. On Sept. 25, 1948, Father Kapaun was granted permission to re-enlist in the Army. Chaplain Kapaun proved to be a heroic priest and chaplain to the men that he served. Volunteering to stay behind with the injured, Chaplain Kapaun was captured by the North Korean and Communist Chinese forces.

Chaplain Kapaun’s service to his fellow prisoners has become legendary among those who knew of him. Scores of men attribute their survival to Chaplain Kapaun, enlivening their hope in better days to come. Chaplain Kapaun was taken to the camp hospital, known to the prisoners as the “death house” where he died on  May 23, 1951.

There has already been considerable work completed toward Father Kapaun’s cause. Archbishop O’Brien started the ball rolling in 1993 when he called for Father Kapaun to receive the title of Servant of God. Through the past 15 or so years, both the Archdiocese of the Military Services and the Diocese of Wichita have been collecting information on Father Kapaun’s life of virtue. The information gathered thus far will provide a basis for the documentation needed for the canonization process.

Once this information has been gathered and documented, it will be sent to the Congregation for Saints in Rome. Dr. Andrea Ambrosi of the Ambrosi Law Firm in Rome will help guide the diocesan phase of the canonization process. Once complete, Dr. Ambrosi will oversee the Roman phase of the process as the cause is presented to the Congregation for Saints.

Printed with permission from the Catholic Advance, the newspaper for the Diocese of Witchita, Kansas.