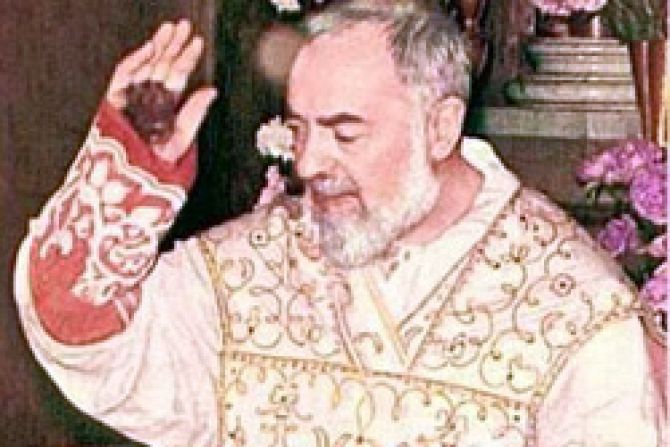 In an article published by the L’Osservatore Romano, Francesco Castelli, a biographer of St. Pio of Pietrelcina, has revealed details of the first investigation in 1921 by the Holy Office—now the Congregation for the Doctrine of the Faith—into the life of the Italian priest and the authenticity of his stigmata.

Castelli explained that the recent opening of the archives that contain the information on the first investigations show that it is not true that the Holy Office was suspicious of Padre Pio, but rather that there was admiration and appreciation for him.

In 1921, the Holy Office charged Bishop Carlo Raffaello Rossi, who would later be made cardinal, with visiting Padre Pio to investigate his life and the origin of his stigmata. In his report, Bishop Rossi wrote that Padre Pio “held his head high and was serene, his look lively and sweet, his words gleamed with kindness and sincerity.”

The task that began on June 14 of that year lasted for eight days, during which Bishop Rossi observed Padre Pio in detail. He wrote that he was very gentle with his brothers, beloved by his superiors for being a “great example and not a gossiper.”  He spent 10-12 hours a day in the confessional and he celebrated the Mass with “extraordinary devotion.”

Bishop Rossi said the observations were not sufficient and he decided to interview Padre Pio, who responded to 142 questions under oath with his hand on the Gospels. Castelli says his answers almost constituted a complete biography.

Questions such as, “Who gave you the stigmata? For what reason? Were you given a specific mission?” were answered serenely by the Italian saint in the following manner:

“On September 20, 1918 after celebrating Mass, while I was giving thanks in the Choir, I was repeatedly overcome by trembling. Later I became calm again and I saw our Lord as if He were on the cross—but I did not see if He did have a cross—lamenting the lack of response from mankind, especially from those consecrated to Him who are His favorites. He was showing that He was suffering and that He desired to unite souls to His Passion. He invited me to enter into His sufferings and to mediate upon them: and at the same time to concern myself with the health of the brothers. Immediately I felt full of compassion for the sufferings of the Lord and I asked Him what I could do. I heard this voice: ‘I unite you to my Passion’. And immediately, the vision having disappeared, I came to and I saw these signs from which blood was flowing.  I did not have them before.”

Castelli said Bishop Rossi went even further. He asked to examine the wounds and as he did so he asked Padre Pio about them.  He saw that the wound in his side “changed aspects frequently and at that moment was in the shape of a triangle, never before seen. Regarding the wounds of Padre Pio, he gave me precise and detailed answers explaining in addition that the wounds in his feet and side had a sort of radiant aspect.”

Bishop Rossi concluded that the wounds were not “the work of the devil” nor were they the result of “deceit, fraud or a malicious or evil ability.  Much less were they the result of external suggestion, nor do I consider them to be the result of suggestion.”  The distinctive elements “of true stigmata were found in those of Padre Pio,” he added.  Other details such as his high fevers and perfume-like scents confirmed the veracity of the phenomenon.

Castelli said the first thing that emerges from these investigations is that the “feared Roman dicastery was not, in these circumstances, an enemy of Padre Pio, but rather the complete opposite! Bishop Rossi showed himself to be an absolute inquisitor but he was also a mature man of true valor, devoid of unjustified harshness towards the one he was questioning.”

Thanks to these investigations, the former Holy Office possesses a history of Padre Pio written by his “spiritual father, Benedetto, a document extremely rich in information that up to now had been almost completely ignored.”

Upon writing that after 1939 there is no clear way to tell what happened to the Capuchin friar who died on September 22, 1968, Castelli recalled how Bishop Rossi would remember the saint in his own words: “Padre Pio is a good and exemplary religious, trained in the practice of virtue, given over to piety and perhaps elevated in degrees of prayer that go beyond the external, resplendent in particular with a profound humility and singular simplicity that have never waivered even in the most difficult of times, in which these virtues have been tried in a serious and dangerous way.”

Francesco Castelli is professor of History of the Contemporary Church at the Romano Guardini Institute of Religious Science and Director of the Historical Archives of the Diocese of Taranto.