Pope explores St. Paul's teaching on the Church as Bride of Christ 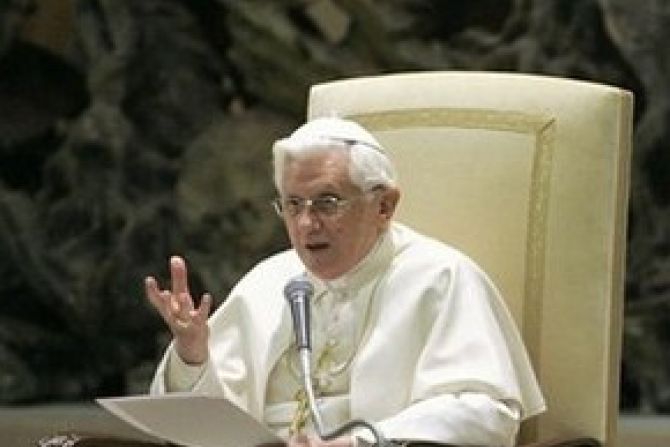 More than 4,000 people gathered in the Vatican’s Paul VI Hall to hear Pope Benedict XVI deliver his continuing series of teachings on St. Paul, which today focused on the Apostle’s teaching about Christ as the head of the Church and the Church as his Bride.

As he began his Wednesday general audience, Pope Benedict explained that his reflections would focus on St. Paul’s “twin” letters of Colossians and Ephesians, which are “very close in their manner of expression, vocabulary, and exposition."

Similar in language, they are unique in developing the theme of Christ as "head" or kephalé of the Church. The Pope said that Christ “guides and is responsible for the Christian community as its leader and its Lord… The Church is subject to Him, both to follow His superior guidance and to receive all of the life that emanates from Him.”

Pope Benedict explained that Christ is considered as head of the heavenly powers and of the entire cosmos. Paul, he expounded, “says that God places Christ above every principality and power. His words assure us that Christ is above every hostile power, so that if we are close to him we have nothing to fear."

In the context of the entire cosmos being subject to Christ, the Holy Father referred to the depiction of Christ as "Pantocrator," shown enthroned over the world, on a rainbow. This depiction, the Pope said, "indicates His equality with God at Whose right hand He sits, and hence also His unrivalled role as the guide of human destinies.”

"Such a vision," he added, "can only be conceived by the Church, not in the sense that she wishes unduly to appropriate that which is not hers, but in another, dual, sense: both in that the Church recognizes that in any case Christ is greater than herself, because His lordship extends beyond her confines, and in that only the Church, and not the cosmos, is defined as the Body of Christ. This means we must give positive consideration to worldly things, because Christ recapitulates them in Himself, and at the same time we must fully live our specific ecclesial identity, which is the closest to the identity of Christ Himself."

Another aspect of the Apostle‘s two Letters is "the concept of mystery," "the inscrutable divine plan for the destiny of mankind, of peoples and of the world,” he said. It is for this reason that one “finds fulfillment in Christ,” the Holy Father noted.

Finally, the Holy Father touched on the recurring theme of "the Church as the bride of Christ.” According to St. Paul, the Pope said, Christ has "won" his bride, the Church, by giving his life for her, “the greatest possible demonstration of love."

“What greater sign of love could there be than this,” he remarked. Christ “is concerned for her beauty; not just the beauty acquired through Baptism, but also the beauty that must grow every day through a life of irreproachable moral behavior, without spot or blemish.”

"From here to the shared experience of Christian marriage is but a short step," he observed. “And in fact it is not clear what the initial point of reference was for the author of the Letter: whether the Christ-Church relationship provided a light in which to consider the union of man and woman; or whether experience of conjugal union was the light in which to examine the relations between Christ and the Church.”

"These two Letters are a great catechesis, from them we can learn how to be good Christians," Pope Benedict concluded.

"If we begin to understand that the cosmos is the mark of Christ, we understand what our relationship with the cosmos is, what problems are involved in its conservation. We learn to see it using reason, but a reason moved by love, respect and humility. If we remember that the Church is the Body of Christ, that Christ gave Himself for her, then we learn to live with Christ in mutual love, a love that unites us to God and brings us to see the image of Christ in others. Let us ask the Lord to help us meditate well on Sacred Scripture, his Word, and to really learn to live well.”