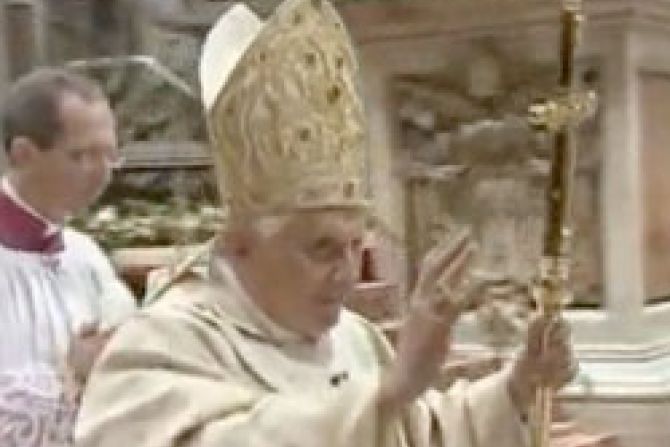 Changes have been made at St. Peter's Basilica after a security breach on Christmas Eve that left the Pope on the floor and a cardinal hospitalized.  A meeting was held between heads of security and the Vatican Secretary of State in the days following the incident and at least one visible measure has been taken to prevent similar disturbances in the future.

According to Andrea Tornielli of Il Giornale, the obvious modification is a widening of the aisle in which the Pontiff, concelebrants and accompanying servers process to the altar.  Barriers that before separated Pope Benedict from attendees by a couple of steps have been moved farther outwards to expand the procession space.

While the number of guards will remain the same, reported Tornielli, the extra yard or so on each side will create more space for them to maneuver, thus reducing the risk of an event similar to that of Midnight Mass on Dec. 24 in which a mentally unstable woman was able to reach the Pope as she was being blocked by Vatican security chief Domenico Giani.

In the rush to protect the Pope, Cardinal Roger Etchegaray was bumped to the ground by security staff at which time he suffered a broken femur.

With the new layout, such outcomes will be less likely.

The Pope will still be free to approach those present at basilica celebrations for blessings and greetings, but now he will cover a little extra distance in the name of safety.

Thus far, no official description has been made by the Vatican of any other changes to security procedures within the Vatican and there is no word of how many fewer seats will be available for liturgical celebrations due to the expansion of the central aisle.