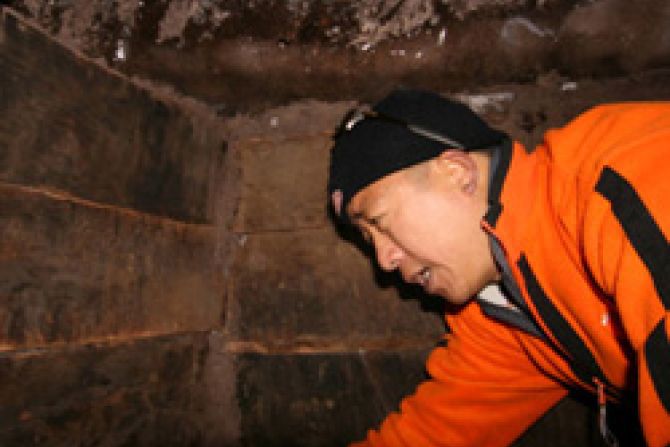 A Chinese explorer inside one of the wooden structures on Mt. Ararat. | Noah's Ark Ministries International.

A Chinese-Turkish exploration team reported on Sunday that they have discovered a wooden structure on the top of Mt. Ararat in Turkey which they believe to be the biblical Noah's Ark.

“The search team has made the greatest discovery in history. This finding is very important and the greatest up to now,” said a team archaeologist, Prof. Oktay Belli, in an April 25 press conference.  Although many “people have searched the mountain for the holy Ark,” he added, this recent discovery “is the first serious search (and) that the team found a wood structure under ice.”

Noah's Ark Ministries International (NAMI) reported earlier this week that after a nearly two year expedition involving difficult weather and treacherous conditions, the team discovered a broken up wood structure with seven spaces, containing wood fragments from over 4,800 years ago. According to the Bible, after the earth was flooded and the waters receded, Noah's ark ran aground on a mountain, which many believe to be Mt. Ararat – the highest point in the region.

Team member Panda Lee recalled on Sunday that in October 2008, “I climbed the mountain with the Turkish team. At an elevation of more than 4,000 meters (13,123 feet), I saw a structure built with plank-like timber. Each plank was about 8 inches wide. I could see tenons, proof of ancient construction predating the use of metal nails.”

“We walked about 100 meters to another site,” she added. “I could see broken wood fragments embedded in a glacier, and some 20 meters long. I surveyed the landscape and found that the wooden structure was permanently covered by ice and volcanic rocks.”

The structure contains compartments with wooden beams that the team believes housed animals. Dismissing arguments that the structure could be a human settlement, the archeologists explained that none have ever been found above 11,000 feet in the region, Fox News reported on Tuesday.

Dr. Ahmet Özbek, a Turkish geologist, explained how the region's climate helped preserve the structure for thousands years without decaying or becoming petrified.

“In present days, the permanent snow line on Mt. Ararat is 3,900 meters (12,800 feet). The wood structure was found higher than 4,000 meters,” he said, adding that  the low temperature and environmental condition of glacier deposits and volcanic material helped the preservation. He also explained that the wood material was able to carry loads up to 5 times its weight, which enabled the structure to bear a considerable amount without breaking into pieces.

Turkish government officials thanked the evangelical search team for their efforts and pledged their help in furthering NAMI's scientific research on the discovery. The officials will also ask the central government in Ankara to apply for UNESCO World Heritage status to protect the site during the archeological dig.

“For more than 2,000 years, historical and eyewitnesses accounts tell us that there is an ancient boat on Mt. Ararat which survived a great flood and landed on the mountain,” said Muhsin Bulut, Cultural Ministries Director of Agri Province, at the press conference Sunday. “People believed that it is Noah’s Ark. I believe the team has finally located this ancient boat and I believe it is Noah’s Ark.”