Sr. Jeannine Gramick claims disconnect between laity and bishops, says half of priests are homosexual 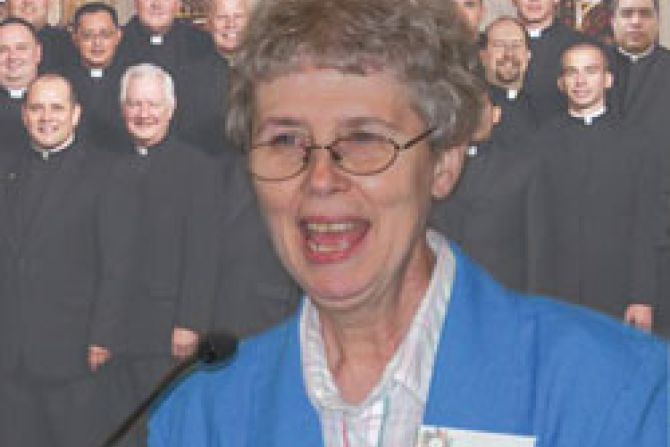 Sr. Jeannine Gramick, founder of a dissenting outreach effort to homosexual persons, in an interview with a Dallas-area homosexual paper has claimed to see a disconnect between laity and the Catholic bishops. She also asserted that as many as 50 percent of Catholic priests are homosexual.

Sr. Gramick co-founded New Ways Ministry in 1977. The organization describes itself as a “gay-positive ministry of advocacy and justice,” but the U.S. bishops have criticized its approach to Catholic moral teaching. She was has also faced disciplinary action from the Vatican.

The sister has been in Dallas to attend the Leadership Conference of Women’s Religious (LCWR) and to speak to a group of Catholics. The LCWR is itself undergoing a doctrinal investigation from the Vatican.

In an interview with the newspaper The Dallas Voice, published on Aug. 12, Sr. Gramick said she believes God is calling her to do her work.

At her Wednesday speaking engagement at the homosexual Resource Center Dallas, she spoke with a teacher concerned she would be fired if she helped students who “came out” as homosexuals to her.

According to The Dallas Voice, Sr. Gramick said the teacher should help her students by teaching “the full range of Catholic theologies.” While the hierarchy teaches one thing, Gramick claimed, a “vast majority” of Catholic writers and theologians teach something else.

She estimated that as many as half of all priests are homosexual, claiming that people go to church because they like the priest and do not care about his sexual orientation.

Sr. Gramick referred to the story of a church in Greenwich Village which has marched in the New York “gay pride” parade, but was told by Archbishop Timothy Dolan that they could not carry their church’s banner in this year’s parade. According to the sister, the marchers instead wore T-shirts with their church’s logo and carried a blank banner.

“They were on CNN. That was great publicity for the church that was being gay friendly,” Gramick claimed. “Not so good for the archbishop.”

According to The Dallas Voice, New Ways Ministry is experimenting with a new program to target legislators as well as Catholic grassroots voters in Maryland.

In a February 5, 2010 statement, Cardinal Francis George said that New Ways Ministry has “no approval or recognition from the Catholic Church” and “cannot speak on behalf of the Catholic faithful in the United States.”

New Ways Ministry was like “other groups that claim to be Catholic but deny central aspects of Church teaching.” Its “crucial defect,” according to the cardinal, was its “lack of adherence” to Church teaching on the morality of homosexual acts.

“No one should be misled by the claim that New Ways Ministry provides an authentic interpretation of Catholic teaching and an authentic Catholic pastoral practice,” the cardinal said. “Their claim to be Catholic only confuses the faithful regarding the authentic teaching and ministry of the Church with respect to persons with a homosexual inclination.”