Seminarian may owe his life to Cardinal Van Thuan's intercession 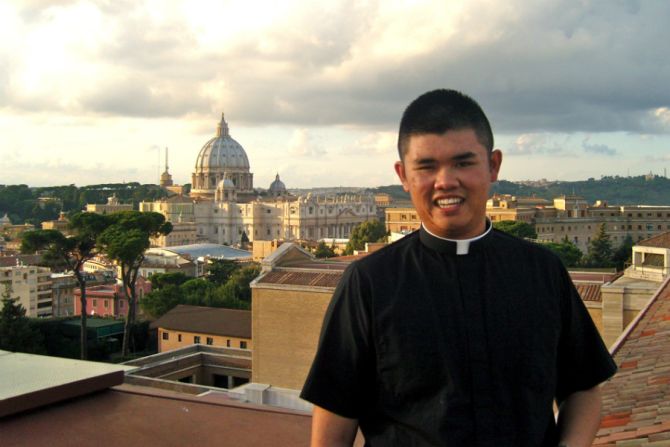 Doctors said Joseph Nguyen was dead. His heart rate was dropping beyond recovery, and all brain activity was gone. But while they wrote his death certificate, Joseph's parents were asking an old family friend for help: a Vietnamese cardinal who is being considered for beatification.

Joseph Nguyen has since re-enrolled in seminary. He's seen his own death certificate, now stamped "VOID." He has only two memories of the 32-day coma, which he says felt otherwise like a "great night's sleep."

During the weeks that he hovered between life and death in 2009, Joseph says he had two encounters with Cardinal Francois-Xavier Nguyen Van Thuan.

The revered Vietnamese Cardinal died in 2002. In 2007 he received a prominent mention in Pope Benedict XVI's encyclical "Spe Salvi," where the Holy Father cited his exemplary Christian witness during his 13 years as a political prisoner. His cause for beatification began in 2007 as well. In October 2010, the Vatican began its own inquiry into his possible sainthood.

Long before anyone thought to declare him a saint, the future cardinal was simply a priest– often celebrating private Masses in the homes of some Vietnamese faithful. Although Joseph Nguyen never met Cardinal Van Thuan during his earthly life, his father's family knew "Father Van Thuan" quite well. They thought of the priest "almost like a family member."

That family bond deepened when Cardinal Van Thuan became Archbishop of Saigon, and subsequently a prisoner of the Communist regime.

In 1975, Joseph Nguyen's parents immigrated from Southeast Asia to the United States, where their son was later born. Joseph knew about Cardinal Van Thuan's heroic life, and appreciated his message of peace and hope. But the young seminarian never imagined he would be describing details of his own life, and near-death, to investigators for the cardinal's canonization.

It began in August 2009, during Joseph's third year in the seminary. He was assigned to hospital work, visiting and counseling the sick, as well as bringing the Eucharist to Catholic patients. Early in the fall, he caught what he thought was only a common seasonal flu. When the illness worsened, he asked for leave from the seminary to recover at home.

"I remember October 1st," he recounted to CNA. "I had no idea why I was gasping for air." His father drove him to the hospital, where he checked himself in. But Joseph has no memory of that event, or the emergency tracheotomy he received after losing the ability to breathe.

Later, he would hear about the day he was pronounced dead, while his parents kept hope alive and prayed fervently for Cardinal Van Thuan's intercession. He would also hear about how, on the feast of Our Lady of the Rosary, while still comatose, he began violently pulling the tubes from his body, stopping only when his father placed a rosary in his hand.

He'd also learn about the second time his body seemed to be shutting down. That time, no one declared his death. They'd already seen one seemingly impossible recovery.

When Joseph awoke, after 32 days, he knew nothing about any of this. A doctor explained he had fallen ill not only with a seasonal flu, but also the H1N1 "Swine Flu," and severe pneumonia. Friends and family later told him the details of his month in the coma.

But when he could speak again, Joseph had his own story to tell.

Joseph said he not only saw, but actually met and spoke with Cardinal Van Thuan, during two vivid incidents he described as a "separation of soul and body." Although he said he couldn't reveal the details of the ecounters, he did say that he suspected that they occurred while his doctors were observing his loss of brain activity and decline in vital signs.

"Soon after the second visit" with the cardinal, he said, "I woke up from the coma." He had "no idea what had happened," or why he had "all these tubes and wires" coming out of his body, particularly the tube in his neck that kept him from speaking.

Doctors thought it would be months or years before he could speak, walk, or study. But within days he was talking and breathing normally, racing his nurses around the rehabilitation room.
He also received an entirely unexpected phone call from Cardinal Van Thuan's sister in Canada, who ended up giving him one of her brother's rosaries.

Joseph returned to the seminary at the beginning of the following semester– a far cry from the two years his doctors had advised him to wait.

As others learned about Cardinal Van Thuan's possible involvement in Joseph's healing, he ended up providing information to officials working on the cardinal's cause for beatification in Rome. Apart from that contribution, though, the young seminarian just wants to move forward toward the goal of ordination. When he returned to the seminary, Joseph was assigned once again to hospital duties.

While he was reticent about some potentially miraculous aspects of his healing, Joseph spoke enthusiastically about his current hospital work. He said his coma and recovery experience have allowed him to give hope and comfort to patients.

Those patients don't need to know about his mysterious meetings with a possible saint, or his breathtaking return from death. What matters more is to see the scar on his throat, and know he understands. "It's very fulfilling to be able to walk into a room and say ... 'You don't have to feel this alone, because I've been there' – physically, there, in that hospital bed."

Joseph recalled that his experiences in the coma instilled "the virtue of hope" in his heart, giving him a message he hopes to share with those in desperate circumstances. "That's Cardinal Van Thuan in my life," the future priest reflected.