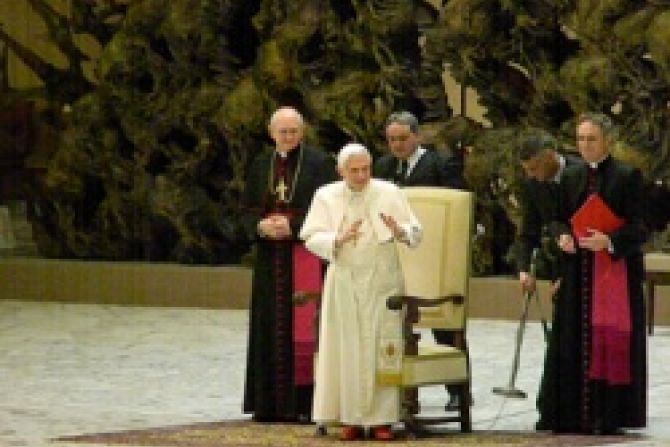 Pope Benedict XVI told the family and friends of the Church’s newest batch of cardinals that this weekend’s consistory was “an opportunity to reflect upon the universal mission of the Church in the history of man.”

“In human affairs, which are often agitated and confused, the Church is always alive and present, bringing Christ: light and hope for all humankind,” he told over 4,000 family members, friends and pilgrims gathered in the Vatican’s Paul VI Hall on Feb. 20.

“Remaining united to the Church and to the message of salvation she bears, means anchoring ourselves in truth, reinforcing a sense of true values, remaining serene whatever happens,” the Pope said.

In total, the Pope created 22 new cardinals this weekend. Among them were Cardinal Edwin F. O’Brien, Emeritus Archbishop of Baltimore and now the Grand Master of The Equestrian Order of the Holy Sepulchre of Jerusalem, and Cardinal Timothy M. Dolan, Archbishop of New York. It’s estimated his diocese alone brought over 1,000 pilgrims to Rome.

“With great joy I meet you, relatives and friends of the newly created cardinals, just days after the solemn celebration of the consistory in which these your beloved pastors were called to the College of Cardinals,” said the Pope.

He said the occasion gave him the opportunity to extend his “cordial greetings more directly and more intimately” to all, and especially to the new cardinals. He hoped that the family and friends present would “gather with affection” around their cardinals so as to feel “ever closer to their hearts and their apostolic worries.”

“May you listen with lively hope to their words as fathers and teachers. Be one with them and each other in faith and charity, to be more fervent and courageous witnesses of Christ.”

Turning to the French-speaking pilgrims who accompanied the 91-year-old religious historian Cardinal Julien Ries from Belgium, the Pope said that “our society, which experiences moments of uncertainty and doubt, has need of Christ’s clarity.”

Pope Benedict hoped that each Christian would “bear witness with faith and courage” and that the imminent period of Lent will “favor a return towards God.”

He finished his remarks by exhorting the pilgrims to “always to remain united to your pastors, and to the new cardinals, in order to be in communion with the Church,” as “unity in the Church is a divine gift which must be defended and developed.”

The audience ended with the Pope entrusting the pilgrims and his “dear brother cardinals” to “protection of the Mother of God and of the Apostles Peter and Paul.”