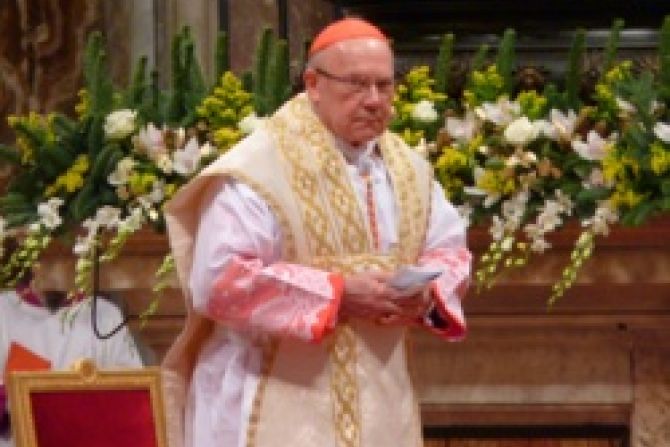 Catholic theology can be judged by its fidelity to Biblical revelation, the Vatican's International Theological Commission affirmed March 8 in a new document on the role of theologians.

“Theology in its entirety should conform to the scriptures, and the scriptures should sustain and accompany all theological work,” the commission said in its document “Theology Today: Perspectives, Principles and Criteria.”

Fidelity to scripture is essential, the commission stated, “because theology is concerned with the truth of the Gospel, and it can know that truth only if it investigates the normative witness to it in the canon of sacred Scripture.” Such investigation “relates the human words of the Bible to the living Word of God,” Jesus Christ himself.

The International Theological Commission assists the Vatican's highest doctrinal office, the Congregation for the Doctrine of the Faith, in its examination of questions about Church teaching. The commission's current president, Cardinal William J. Levada, is also the prefect of the congregation.

Cardinal Levada authorized the release of the new document, which has been in the works since 2004. Attributed to the commission as a whole, the text was drafted in accordance with further studies led by Monsignor Paul McPartlan, a theology professor at the Catholic University of America.

The document begins by acknowledging the growth in new areas of theology following the Second Vatican Council. During the same period, however, there has been “a certain fragmentation of theology,” making it difficult for the discipline to maintain “its own true identity.”

While there is room for a legitimate diversity of theological insights, the Church also needs “a common discourse … to communicate the one message of Christ to the world.”

According to the commission members, true Catholic theology “arises from an attentive listening to the Word of God,” “situates itself consciously and faithfully in the communion of the Church,” and is “orientated to the service of God in the world” through the communication of revealed truth.

Remedies for the “fragmentation” of theology, they suggested, can be found in the Second Vatican Council's official teachings – particularly in “Dei Verbum,” its text on the topic of divine revelation.

“The ‘study of the sacred page’ should be the ‘very soul of sacred theology,’” the commission recalled, quoting Vatican II's “core affirmation with regard to theology.” Thus, “biblical themes should have first place” for modern theologians, as they did for the early Church Fathers.

Catholic theology can also be judged by its faithfulness to the Church's constant tradition – which includes its forms of prayer and worship, its formulation of creeds, and the moral rule of life which it sets out for its members.

While pursuing deeper insight into revealed truth, Catholic theology “recognizes the teaching authority of ecumenical councils, the ordinary and universal magisterium of the bishops, and the papal magisterium,” the theological commission recalled.

Theology, according to the commission, is essentially “a work of reason illuminated by faith,” involving both the acceptance of divine revelation and the active engagement of the mind.

The harmony of faith and reason, a key theme of both Pope John Paul II and Pope Benedict XVI, is strongly affirmed in the new document's final chapter – which stresses the value of reason, in contrast with postmodern philosophies that devalue it.

“By the use of reason, the believer grasps the profound connections between the different stages in the history of salvation and also between the various mysteries of faith which illuminate one another,” the commission observed. “On the other hand, faith stimulates reason itself and stretches its limits.”

“Reason is stirred to explore paths which of itself it would not even have suspected it could take. This encounter with the Word of God leaves reason enriched, because it discovers new and unsuspected horizons.”