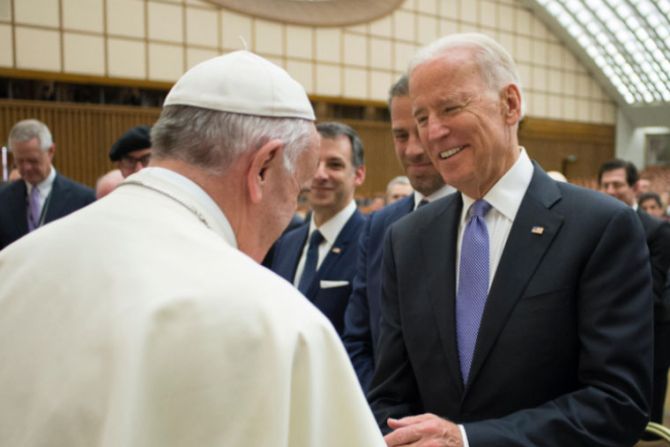 "At a time when the grave crises facing our human family call for farsighted and united responses, I pray that your decisions will be guided by a concern for building a society marked by authentic justice and freedom, together with unfailing respect for the rights and dignity of every person, especially the poor, the vulnerable and those who have no voice," the pope said Jan. 20.

Biden, a Catholic, was sworn into office as the 46th president of the United States outside the U.S. Capitol Building in Washington, D.C. Jan. 20.

For the occasion, Pope Francis sent Biden his good wishes and "the assurance of my prayers that Almighty God will grant you wisdom and strength in the exercise of your high office."

The pope wished that under Biden's leadership the American people would draw strength from the "lofty political, ethical and religious values that have inspired the nation since its founding."

Francis added that he is asking God, "the source of all wisdom and truth, to guide your efforts to foster understanding, reconciliation and peace within the United States and among the nations of the world in order to advance the universal common good."

The pope closed his message by invoking blessings upon Biden, his family, and the American people.

Shortly prior, the U.S. bishops' conference released the full text of a prepared statement on Biden's inauguration as president, after initially withholding it from publication.

Although it was expected to be released at 9 a.m. Eastern time Wednesday, the statement was not published by the bishops' conference at that time. According to The Pillar, Vatican Secretariat of State officials stepped in to prevent its publication.

The conference published the full statement shortly after noon.

The U.S. bishops' prepared statement said they planned to engage the new administration on issues including abortion, religious freedom, racism, and poverty.

According to sources at the conference, figures within the conference pushed back on language in the prepared statement that had highlighted areas of concern with the incoming Biden administration on abortion, gender, and religious freedom.

In particular, sources at the conference told CNA that Cardinal Blase Cupich of Chicago opposed the inclusion of language noting abortion as a problem with the incoming Biden administration. Biden has pledged to support taxpayer-funded abortion, among other pro-abortion policies.

In January 2017, Pope Francis sent a message to then-U.S. President Donald Trump on the occasion of his inauguration. The Archbishop of San Francisco on Wednesday stated his support for the U.S. bishops’ conference (USCCB) president, who had noted areas of collaboration and concern with incoming President Joe Biden.