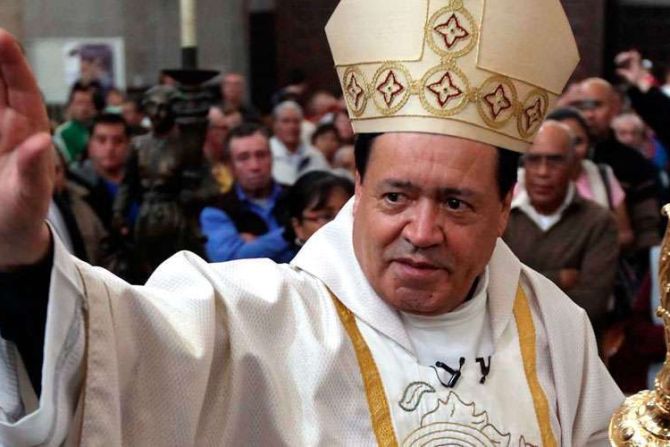 Carlos Cardinal Aguiar Retes of Mexico denied this week that his archdiocese has incurred "material and spiritual abandonment" of his predecessor, who is gravely ill with Covid-19, by not providing for his care in a private hospital.

Norberto Cardinal Rivera Carrera, 78, who was Archbishop of Mexico from 1995 to 2017, was admitted to a public hospital earlier this month.

"In cases where hospitalization of priests and bishops is required, it is provided through hospitals in the state sector," Cardinal Aguiar Retes has said.

"The decision that bishops and priests receive medical attention for COVID in these hospitals is because of the economic situation experienced by the Church throughout the country and in communion and solidarity with what thousands of Mexicans have lived during this pandemic and those we accompany through our daily prayer."

The Archdiocese of Mexico said Jan. 20 that "the Vicariate of the Clergy of the Archdiocese is in charge of accompanying priests and bishops during their illness, maintaining contact, supporting, and monitoring their state of health."

Fr. Hugo Valdemar, who for 15 years was communications director to Cardinal Rivera, accused Cardinal Aguiar Retes Jan. 19 of abandoning "both spiritually and materially" his predecessor, by denying him the financial resources for his medical care in a private hospital in Mexico City.

According to Fr. Valdemar, "caring for the health of Cardinal Rivera is not charity, is their obligation, and if they claim that there are no resources, that cannot be an excuse to abandon him. Don Norberto always took personal care of his auxiliary bishops and his priests."

The Code of Canon Law states that "the conference of bishops must take care that suitable and decent support is provided for a retired bishop, with attention given to the primary obligation which binds the diocese he has served."

The Archdiocese of Mexico said that if Cardinal Rivera wants to be taken care of in the private sector, "he can do so with his own resources or the support of the people close to him."

The archdiocese reported Jan. 16 that Cardinal Rivera had been hospitalized after testing positive for Covid. Since then, the reports regarding his health have been increasingly pessimistic.

The communications director of the archdiocese, Javier Rodríguez, told ACI Prensa that Cardinal Aguiar Retes has assigned a priest to be permanently "aware of the needs" of Cardinal Rivera.

Interviewed by ACI Prensa Jan. 21, Fr. Valdemar reiterated his accusation and demanded that the archdiocese "say with reliable data how they have supported and cared spiritually for Cardinal Rivera, because if there is a priest assigned to take care of him, he was nowhere to be found last Monday, when Don Norberto was in danger of death, and a priest had to  be rushed from the archdiocese, because there was no one around."

"I read the statement with great surprise because, as far as I know, no priest has been appointed by Archbishop Carlos Aguiar for this purpose. In any case, why didn't they released the name of the supposed priest and thus be able to deny the abandonment that I have denounced? If they don't give the name, it's for a very simple reason, because it's a lie," he said.

Fr. Valdemar also said that if Cardinal Rivera tried a private hospital "it was because of the seriousness of his condition and trusting in the validity of his (Church-assigned) medical insurance, only to find out that the insurance had expired in August last year and he was never informed about it".

Fr. Valdemar said that the insurance "expired because the archdiocese did not make the second payment. This is criminal negligence."

"It seems to me that it is time for the Holy Father, or the Holy See, to intervene and put a limit to so much infamy against an archbishop prostrate in serious condition that he cannot defend himself and who faithfully served the Archdiocese of Mexico for 22 years and that, unlike the current Archbishop Aguiar Retes, has never left any priest in distress, who, by the way, were always treated in good quality hospitals."

"If, God forbid, Archbishop Aguiar fell ill, would they admit him to a hospital like the Mexican Institute of Social Security? Are they serious?," he pointed out.

According to the government of Mexico, more than 1.8 million cases of Covid-19 have been confirmed in the country, with more than 163,000 deaths. Cardinal Carlos Aguiar Retes of Mexico City has said he agrees with Pope Francis’ comments on same-sex civil unions, made public in a recently released documentary.