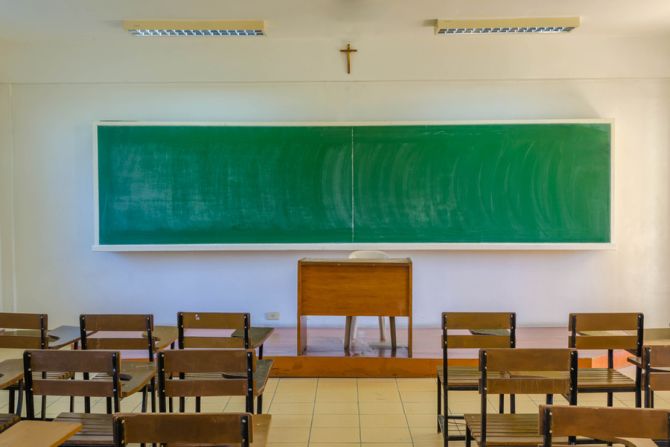 Enrollment at Catholic schools this academic year has seen its largest drop in nearly half a century, according to a new report.

A data brief of the National Catholic Educational Association (NCEA) showed that enrollment at Catholic schools was down 6.4% for the 2020-2021 school year-the biggest percentage drop in enrollment since 1973.

The overall number of students at Catholic schools declined by more than 110,000 for the present academic year, and more than 200 schools closed after the previous school year; these figures were included in the NCEA's report "Catholic School Enrollment and School Closures, Post-COVID-19," published on Feb. 8.

A large share of this decline was due to enrollment attrition at pre-Kindergarten schools.

"Of the net loss of 111,000 students to Catholic schools from 2019-2020 to 2020-2021, 40% of that loss can be attributed to Pre-Kindergarten related enrollment attrition," the NCEA said. "This mirrors similar losses in public school preschool and Kindergarten enrollment."

The drop in enrollment amid the COVID-19 pandemic far outpaces the declines that followed the Church's 2002 clergy sex abuse crisis and the 2008 financial crisis.

Enrollment at Catholic schools dropped by 2.7% in 2003, at the height of the clerical sex abuse scandal, and by 3.5% in 2008, during the economic downturn. The NCEA does not list the reasons why students leave schools, but instead monitors total enrollment figures.

In addition, the closure of Catholic schools disproportionately affected lower-income students of color living in urban areas, the report found.

"In many cases, these underserved groups were over twice as likely to have their Catholic schools close compared to both all school closures and all communities served by Catholic schools," the NCEA said.

This "erasure of Catholic schools" nationwide, the report added, especially in "underserved communities, amounts to a disruptive divestment of social capital and pathways of opportunity for all families."

"It also has the added effect of decreasing the diversity of Catholic school communities that enriches all families regardless of race, ethnicity, socioeconomic status or opportunity," the report said.

According to the NCEA, there are 4,812 Catholic elementary schools and 1,169 Catholic secondary schools nationwide, which collectively serve more than 1.6 million students.

More than 90% of Catholic schools were teaching their students in-person this school year, the NCEA found--unlike many public school districts which offered virtual-only classes.

This disparity did drive some families to send their children to Catholic schools for in-person education, the report noted, but "the full story is still unfolding as Catholic schools have experienced an overall dramatic decline in enrollment and an increase in school closures."

It is unclear if there will be a "bounce-back" in enrollment figures once the pandemic restrictions begin to lift, said the NCEA.

Although enrollment figures are down, the interest in Catholic schools does not appear to be particularly waning, they said. For this academic year, 39.7% of Catholic schools had a wait list for at least one grade, which was 11.2% higher than last year's figure.

Due to the various social distancing restrictions, some schools have been forced to lower their capacity, thus leading to the creation of waiting lists. The United States Conference of Catholic Bishops has condemned a proposed COVID-19 relief bill that excludes support for children and families enrolled in non-public schools.