Generations of black Catholic women "fought against racism in order to answer God's call in their lives." said Dr. Shannen Dee Williams of Villanova University, at a virtual Wednesday event hosted by the Catholic University of America in Washington, D.C.

The event was titled "The Real Sister Act: Why the Stories of U.S. Black Catholic Sisters Matter." The 1992 film "Sister Act," starring Whoopi Goldberg, highlighted the story of Sister Thea Bowman--one of three African-American sisters under consideration for canonization--who worked to combat racism within the Church.

Williams said on Wednesday that Bowman's story is not accurately reflected on screen--evidence of ignorance of black Catholic history, both within the Church and in wider society.

"What does that say about Hollywood and its imagination, that in the hands of Hollywood, Sister Thea Bowman is not a nun, but a morally ambiguous black woman hiding from this white, married mobster boyfriend after he kills someone?" she said. "Thea spent the vast majority of her life as a nun."

"There are many within our society and certainly within Hollywood that are not yet ready to grapple with the reality of black Catholic nuns in this nation," she added.

Williams is the author of "Subversive Habits: The Untold Story of Black Catholic Nuns in the United States." She said that the stories of black Catholic sisters offer lessons about the U.S. Church and about the fight for racial equality.

In many cases, Williams said, black women were historically barred from white religious communities or were not fully included within the community. In other cases, the stories of black religious sisters in the United States were intentionally erased from official records.

Asked about how black religious sisters view their future, Williams said like their white counterparts, the numbers of African-American sisters in the United States has "dwindled."

"But if you include African sisters in that number, the number of black sisters in the United States has increased," Williams said. "Many of the sisters that are going into religious life in both white and black communities are from Africa."

"What's clear is, the future of black women in religious life in the United States and female religious life globally may very well be in the hands of where the Church is growing, experiencing exponential growth, and that is in terms of Africa."

One successful Catholic community of black religious was the Oblates of the Sisters of Providence, the first Catholic U.S. community to accept formerly enslaved women, Williams said.

Another successful black Catholic community was the Sisters of the Holy Family, founded in New Orleans in 1842. They "faced profound resistance," Williams said, as they were prohibited from wearing veils in public for several decades, and fought to keep their religious habits against the protests of fellow Catholic religious.

"These are women who have deep roots in American Catholicism," Williams said. 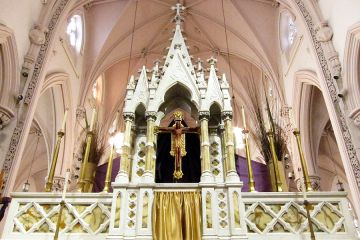