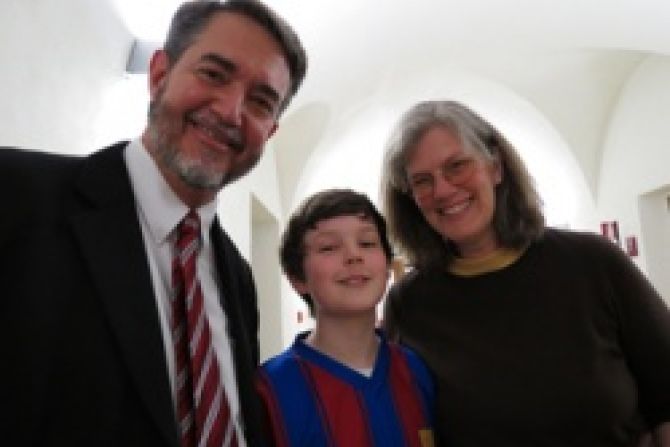 Scott and Kimberly Hahn with their son David in Rome on April 3, 2012.

Scott and Kimberly Hahn have been Catholic for over two decades, but this is the first Holy Week they have ever spent in Rome.

“This experience has been for us overwhelming, and yet the best is yet to come – Holy Thursday, Good Friday and the Easter Vigil. I mean, we’re just standing on tip-toes feeling like kids in a candy store. Like how good can it get?” Scott said to CNA on April 3.

The Hahns are in Rome this week with their three youngest sons, 20-year-old Jeremiah, 17-year-old Joseph and 12-year-old David. This morning they attended Pope Benedict XVI’s general audience in St. Peter’s Square.

“It is always amazing to be here in Rome; to hear all of the languages and see all of the peoples that the Gospel has gone to and realize that this is not an American thing, it’s not even a European thing,” Kimberly said. “God has been at work over the centuries calling all kinds of people to him.”

Kimberly noted she is always particularly moved “to hear old Italian men and young German children all singing to the Holy Father with the same sort of love I have for him.”

Since being received into the Church in 1986, Dr. Scott Hahn has become one of the most popular Catholic speakers and teachers worldwide. His wife Kimberly became a Catholic four years later. The Hahns later recounted their conversions in the co-authored international best-seller “Rome Sweet Home.” The couple has been married for 33 years and has six children and, very soon, six grandchildren.

The Hahns first visited Rome 20 years ago and had the chance to meet Pope John Paul II.

But the visit occurred at a hard time for the family as it came only one month after the death of Scott’s father.

“To be able to share from my heart the sorrow that I felt for my natural father but to look into the eyes of my spiritual father,” said Scott in reference to Pope John Paul, “and to hear him say ‘I’m sorry, I will pray for him’” was a bittersweet experience.

The encounter made Scott realize that as a Catholic he now enjoyed “the spiritual fatherhood of God through Christ to Peter and to all of his successors down through the ages which unites us worldwide as this Catholic, as this international, universal family of God.”

This is why, he explained, “Rome sweet home is not just the title of a book but the description of my own life experience.”

Kimberly said that the family enjoyed the chance to pray at the tomb of Blessed John Paul in St. Peter’s Basilica and “to be in St. Peters Square where the Holy Father was shot,” which is “a place I love to touch and be close to him there.”

Scott said that other favorite Roman sites for the family include the catacombs where the martyrs of the early Church were buried and “where you find out about how people paid a price a long time ago.” He suggested that “we too may end up having to pay a price” as we “may end up in a post-Christian pagan environment that is as resistant or hostile as theirs.”

Kimberly also loves Rome’s churches since “you just go a short distance and you find another magnificent church” where “even the little side chapels are more beautiful than most American churches.” She hopes that Americans visiting Rome will “catch a vision as to what a Catholic church should look like physically.”

Any opportunity to visit the Pontifical North American College seminary is also “very special” to Kimberly because “these are young men in training who will come back to the States as priests.”

“That experience of the Universal Church has been so powerful,” Kimberly said, summing up their Rome visit so far. “I really can hardly imagine what the Easter Triduum is going to be like, but I’m also really looking forward to that.”