The massive Christ the Redeemer statue overlooking Rio de Janeiro in Brazil is undergoing restoration ahead of its 90th anniversary this year.

Standing at nearly 100 feet tall, the statue of Jesus is numbered among the contemporary “Seven Wonders of the World.”

The statue was illuminated for the first time on Oct. 12, 1931, the Feast of Our Lady of Aparecida, Patroness of Brazil.

Brazil’s Catholic population -- the largest of any country in the world -- funded its construction with donations from parishes across the country.

The monument officially became a sanctuary for Catholic worship on the same feast day in 2006. The chapel at the base of the statue offers Mass and Eucharistic adoration to the thousands of pilgrims and tourists who usually visit each year.

Architect Cristina Ventura is in charge of the Christ the Redeemer statue’s restoration this year. Her team will conduct a complete X-ray of the statue, which was constructed with thousands of small triangular hand-cut stones, to identify areas in most need of repair after exposure to the elements.

She told local media: “To be here is important, it is a very strong symbol. Christ the Redeemer embraces the Brazilian population so it is a responsibility, a great privilege, to be there.”

The statue took nine years to construct, from 1922 to 1931. A large heart is molded in the interior of the statue to signify the Sacred Heart of Jesus.

For its inauguration, Guglielmo Marconi, inventor of the wireless telegraph and founder of Vatican Radio, was engaged to illuminate the statue remotely from Italy by the pulse of electromagnetic waves, according to ACI Stampa, CNA’s Italian language news partner.

The idea of ​​placing a religious monument on the top of the city’s Mount Corcovado was first proposed by a Catholic priest, Fr. Pedro Maria Boss, in the mid 19th century, but his appeal to Isabel, Princess Imperial of Brazil, was not heeded.

After the fall of the monarchy and establishment of a republic in Brazil in 1889, the project was not discussed again until the Archdiocese of Rio de Janeiro officially proposed it in 1921.

The first sketches of the statue depicted Christ standing atop a globe holding a cross, but ultimately artist Carlos Oswaldo’s design of Jesus with outstretched arms was selected.

The Brazilian engineer Heitor da Silva Costa led the project, together with the sculptor Paul Landowski who further shaped its Art Deco style.

“The statue of the Divine Savior will be the first image that will emerge from the darkness in which the earth is immersed and will receive the salutation of the star of day, which, after enveloping it with its radiant glow, will form a suitable halo around his head at sunset,” Silva Costa said. 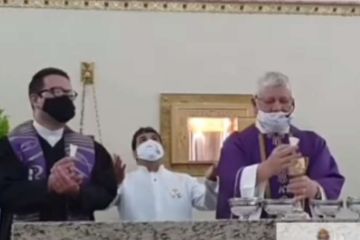 The local bishop and the regional superior of a priest who last week attempted to concelebrate the Eucharist with a Protestant minister have removed the priest as pastor of his parish. 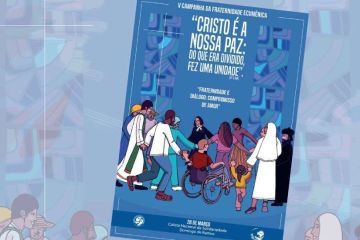 The head of Brazil’s military ordinariate has told the nation’s bishops’ conference he will not use material from this year’s ecumenical Lenten campaign because it contains gender ideology concepts.