Patriarch Pierbattista Pizzaballa blesses the congregation at the Church of the Holy Sepulchre in Jerusalem on April 4, 2021. | Latin Patriarchate of Jerusalem.

The Latin Patriarch of Jerusalem urged Christians in the Holy Land on Easter Sunday to take courage and believe that “nothing is impossible.”

Preaching April 4 at the Church of the Holy Sepulchre in Jerusalem, Patriarch Pierbattista Pizzaballa noted that the coronavirus crisis had brought suffering to the Christian community in the past year.

“That is what I would like to say to our Church: Courage! Nothing is impossible. Let us stop falling back on our wounds, looking for the living among the dead, looking back to our past, to what we were, to what we have lost,” he said in his homily at the Mass, which was also live-streamed.

“We will not find the Risen One there. It’s not our Easter!”

Sunday was the first time that Pizzaballa had presided at the Easter Sunday Mass as Latin Patriarch. He was appointed to the role on Oct. 24, after serving as apostolic administrator of the Latin Patriarchate of Jerusalem from 2016.

Speaking in the church which houses the tomb of Christ and the site of the crucifixion, he said: “In this past year, in much of the world, we have especially counted the infections, the sick, the dead, and, probably, we are all a bit like Mary of Magdala: tempted to run backward, to find the bodies we lost, the missed opportunities, the postponed feasts, the life that seemed to escape us. We all, however, dream of returning to the normality that could resemble very much wanting to find a body, a world, and a sick life, marked by death.”

“In this place, right here, instead, the mysterious voice of the Risen One resounds that directs our search and reopens our eyes, making them able to see in emptiness. And so, we would like to find what was lost. We rediscover ourselves capable of seeing the great novelty of Easter if we listen to that Voice, which speaks to us of the unknown but possible future. It’s a voice that does not send us back, but to the Father and the brothers, that urges us to go not to go back.”

Latin Catholics were unable to celebrate Easter last year at the Church of the Holy Sepulchre. The church, which was first consecrated in the year 335, was closed due to the COVID-19 pandemic.

The last time the church was closed for an extended period was 1349, during an outbreak of the Black Death.

Pizzaballa celebrated all the liturgies of Holy Week at the church. On Palm Sunday afternoon, he also led a procession from Bethphage on the Mount of Olives to Lions’ Gate, near St. Anne Church in the Old City. Around 2,000 people took part, according to the Latin Patriarchate’s website, which noted that Palestinian Christians from the West Bank and Gaza were unable to obtain permits to attend ceremonies in Jerusalem because of coronavirus restrictions.

On Holy Thursday, the patriarch presided at the foot-washing ceremony during the Mass of the Last Supper. On Good Friday, he led the Passion of the Lord service and, on Holy Saturday, he celebrated the Easter Vigil.

Speaking on Easter Sunday, the 55-year-old Italian prelate said: “I believe that this world, tired and wounded, and exhausted by the pandemic and the many situations of fear, death, and pain, worn out by too much vain research, finds less and less what it seeks.”

“It is a world increasingly needing a Church with open eyes, by the Easter look, which knows how to see the traces of life even among the signs of death.”

“Here, together with Christ, a Church called by name by the Lord can and must rise again; a Church that runs to joyfully proclaim it has seen the Lord in many faces and stories of beauty, goodness, and holiness that have consoled and support its journey.”

The Church of the Holy Sepulchre is unique among religious sites as it is partially controlled by several different Christian Churches. The Catholic Church, Greek Orthodox Church, and Armenian Apostolic Church each share control of the building, and other Orthodox Churches also celebrate the Divine Liturgy at the site.

Easter will be celebrated at the church on May 2 by Eastern Churches using the Julian calendar.

Concluding his homily, Pizzaballa said: “Today and after, we will hear the typical greeting on our streets these days: Christ is risen! He is truly risen!”

“It is not only a greeting but our people’s proclamation, the proclamation of a Church that knows how to bear witness with conviction and certainty that every death, every pain, every effort, every tear can be transformed into life. And that there is hope. There is always hope.”

“I, therefore, wish to each one, our Church, and our city to always live in the light of the Risen One, Who gives joy and life to anyone who wants to receive it.” 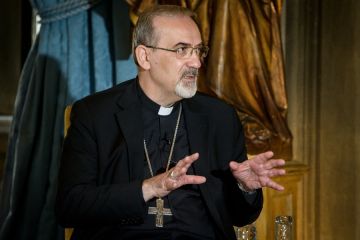 Easter celebrations return to the Church of the Holy Sepulchre

Christians will celebrate Easter at the Church of the Holy Sepulchre this year after the storied church remained closed last Easter due to the COVID-19 pandemic. Christians will struggle to remain in the Holy Land without financial help from Catholics worldwide on Good Friday, a Vatican cardinal has said.