To mark the 120th birthday of Bl. Pier Giorgio Frassati on Tuesday, three Italian associations have encouraged praying the rosary for the intention of the virtue of chastity.

“Taking advantage of this date which allows us to spend some time with Pier Giorgio, to pray with him, we would like to ask him to help and enlighten all young people, all of us, to grow and walk in love, as he walked,” Fr. Paolo Asolan said.

For Pier Giorgio’s birthday, the director of the youth office of the Italian bishops’ conference encouraged Catholics to ask Pier Giorgio for the grace to love with “a love that is one of soul and of body, whose center is the possession and gift of self, in relationship with the Lord and in the happiness of the gift.”

Asolan’s office has joined with two associations dedicated to Bl. Pier Giorgio Frassati to publish short meditations for the Glorious Mysteries of the Rosary, using writings from the 20th-century blessed and from people who knew him. The meditations can be downloaded in four languages, including English.

Bl. Pier Giorgio Frassati was born on April 6, 1901, in Turin, Italy, to a wealthy agnostic family. Early in his life, he found himself drawn to the Catholic faith and to serving Christ in the poor. He was particularly known for his prayer life and his great love of the outdoors. He died from polio on July 4, 1925, at the age of 24.

The associations wrote that they chose chastity as the intention of the rosary because 100 years ago, Bl. Pier Giorgio joined the Confraternity of the Angelic Warfare (the “Angelic Militia”) whose aim “was to provide support in the virtue of chastity, under the patronage of St. Thomas Aquinas and the Blessed Virgin Mary.”

Fr. Asolan said it was right to celebrate the birthday of Pier Giorgio with prayer, “giving him the gift of fulfilling the promise he asked of all his dearest friends: ‘I would like us to all promise a vow that knows neither earthly limits, nor those of time; unity in prayer.’”

“As he himself often proposed to them, our prayer will be a rosary for all young people; asking that the youth be sustained and illumined by the grace of chastity,” Asolan said.

The priest wrote that “the emotional and sexual dimension of life is central and also mistreated, because it often is lived in conflict with/or even separated from the identity and soul of the person.”

“Therefore,” he added, “there are those who emphasize this dimension, and those who remove it; some who live it as it comes, others who have absolutes; some who are afraid of it, and those who have experienced painful violence and abuse.”

Many children and adolescents today, as well as adults, are continually exposed to violence and pornography, he noted.

“We are coming out of a year in which, for many youth, computer and social network were the only spheres where true life was lived,” he said, and “for many, these environments provided occasions of developing dependencies, some of whose symptoms are relational distress (more/less profound), interior short-circuits, and great solitude.”

To many, it does not seem realistic that “one can live out the emotional and sexual dimensions of the heart and soul in liberty, purity of intention, and even with self-control,” Asolan said.

The priest lamented that in some biographies of Bl. Pier Giorgio Frassati, the young man’s emotional and sexual life is minimized or denied, “making of him an angel.”

“It is as though our friend did not have to walk as everyone else,” he commented.

He quoted a schoolmate of the blessed, Mario Attilio, who wrote that Pier Giorgio, while he had the same emotions as his classmates, “was not touched nor damaged by it, as we were.”

“Pier Giorgio, who had shared our spirit of preparation for sexual life, but was not timid nor given to solitary vices, took a different road; one that did not falsify love in such ways,” the friend wrote.

“In Pier Giorgio’s case, temperamental passions did not chain him, nor strong inhibitions,” Attilio said. “Even less was there a nature of frigidity, in which a sexual problem shows itself weakly, late, or possibly never.”

“After a few years, one understood that in him there were other vital reasons, with which we were not gifted. These reasons became the great and smiling force, an exuberant youth who knows what is evil in the world, but has the possibility of remaining apart from it.”

Fr. Asolan added that “chastity is able to preserve the destination of the gift of self, of all that we are. We are able to love without possessing, without exploiting; neither persons, nor things or experiences, in order to redirect everything to our interest or need, whatever our nature.”

“Pier Giorgio’s entire life shows how his service and charity blossomed from a life completely oriented in such a way.” 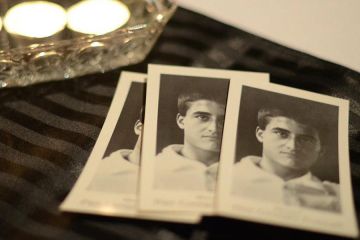 Could the canonization of Bl. Pier Giorgio happen next year?

Ahead of the 2018 synod on youth in Rome, a group of Catholic young people are asking for testimonies and signatures in support of the canonization of Blessed Pier Giorgio Frassati. A thousand young people from Canada gathered at the Cathedral of Saint Mary in Sydney to venerate the relics of Pier Giorgio Frassati, an Italian blessed who died before reaching the age of 24 and who is one of the 10 patron saints of WYD 2008. After being contacted by World Youth Day officials to perform a play going along with this year’s theme, a theater group decided they would have to write and produce their own on Bl. Pier Giorgio Frassati.