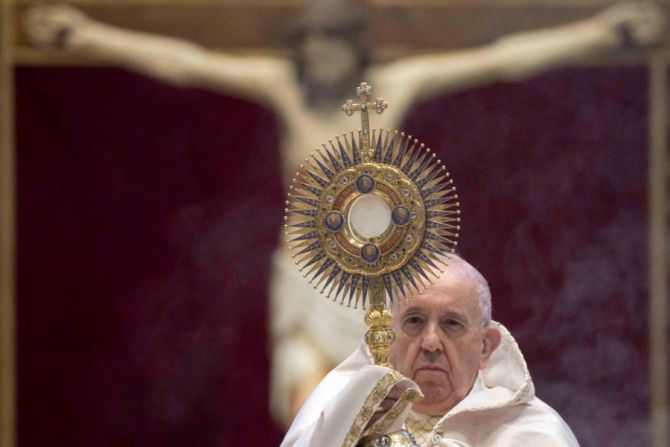 In a letter to a Spanish weekly, Pope Francis recalled “with emotion” his time spent in adoration at the Basilica of the Blessed Sacrament in Buenos Aires.

As a young man of 17 and 18, Jorge Bergoglio would take a bus from his home in the Flores neighborhood to the basilica in downtown Buenos Aires for Eucharistic adoration.

On Saturday nights in 1954 and 1955, with his brother Oscar and a neighbor, the future Pope Francis would go to the basilica to listen to a homily by Fr. José Ramón Aristi.

In his letter to “Alfa y Omega,” Pope Francis said: “The adoration began around nine at night, after the preaching of Fr. Aristi.”

The pope wrote the letter after receiving a copy of a photograph of the ledger which recorded the names of the adorers at the Basilica of the Blessed Sacrament.

In the photo, the names of Jorge Mario Bergoglio and Oscar Bergoglio can be seen on page 84 of the register.

“I was moved by the photocopy of the book on nocturnal adoration,” the pope said in the handwritten letter.

He explained that those there for adoration would take turns before the Blessed Sacrament while others slept on cots in a room connected to the church. They would wake each other for their turn in adoration by saying “venite adoremus,” the Latin phrase for “come, let us adore.”

Pope Francis has mentioned before his close connection to Fr. Aristi, a Sacramentine priest, who was his confessor for many years.

In 2014, the pope explained to priests in Rome that “Aristi was a famous confessor in Buenos Aires. Almost all the clergy confessed to him. He was a provincial of his order, a professor ... but always a confessor, and there was always a line at the church of the Blessed Sacrament.”

Aristi died in 1996, when Pope Francis was an auxiliary bishop and vicar general of Buenos Aires. Before Aristi’s funeral, Bishop Bergoglio visited his body in the crypt of the basilica.

Pope Francis revealed that during that visit, while arranging flowers in the priest’s coffin, he had a sudden urge and quickly pulled off the small cross on Fr. Aristi’s rosary and put it in his pocket.

“At that very moment I looked at him and I said to him: ‘Give me half of your mercy,’” Francis recalled.

He said he still carried the cross with him as pope. “Whenever I have a bad thought about someone, I always place my hand here. And I feel the grace! I feel it doing me good. The example of a merciful priest, of a priest who is close when there is suffering does so much good…” he said.

The only eyewitness to the future pope taking the cross was Fr. Andrés Taborda, an Argentinian Sacramentine priest who was also in the crypt.

Recalling Easter day 1996, the day after Aristi’s death, he said: “We were there in the crypt next to Fr. Aristi’s coffin and I can still picture Bergoglio in his contemplative state; he was very thin at the time. I remember him saying: ‘He was my confessor and he absolved many people from their sins whilst holding this rosary. It can’t be buried…’”

“Fr. Aristi would give the rosary with the small cross to penitents to hold as he listened to their confessions, he would then use it to absolve them from their sins and then asked them to kiss it. Basically, that rosary along with the cross witnessed so much mercy,” Fr. Taborda said.