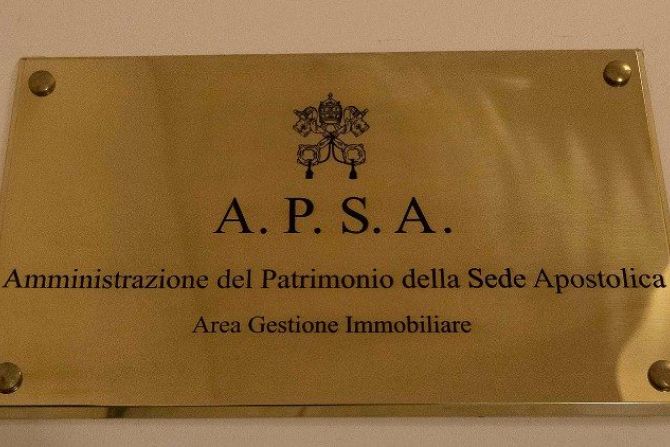 The banner at the entrance of the APSA office in the Vatican. | Vatican News

An Italian investigative news program has accused the Vatican’s treasury of investing 20 million euros (around $24 million) in several pharmaceutical companies involved in making the “morning-after pill.”

The program “Report,” aired on the channel Rai 3, interviewed the former auditor general of the Vatican, Libero Milone, who said that his office alerted superiors at the Vatican to the “risky” character of the investments.

He also told the program he considered the investments a risk “because they did not correspond to the social doctrine of the Church.”

Milone was the Vatican’s first auditor general, appointed in 2015 by Pope Francis. In 2017, he and his deputy, Ferruccio Pannicco, were forced to resign by Archbishop Angelo Becciu, then sostituto of the Secretariat of State, who accused them of spying.

According to an investigation by “Report,” in 2016, APSA, which functions as the Holy See treasury, sovereign wealth manager, and administers payroll and operating expenses for Vatican City, invested 20 million euros in two Swiss pharmaceutical companies.

One of these companies, Novartis, produces and sells the “morning-after pill” through its subsidiary Sandoz.

In the television report, Milone confirmed that Sandoz was one of the pharmaceutical companies. “Report” claimed that Milone alerted APSA and other Vatican superiors about the bad investment and the Novartis shares were sold “immediately.”

The “morning-after pill” is an emergency contraceptive taken after sexual activity to prevent a pregnancy. Use of the pill has been condemned by the Catholic Church because it can also act as a chemical abortifacient, if the woman’s egg has already been fertilized by the sperm and implanted in the uterus by the time the drug is taken.

In the interview, Milone also claimed to have discovered the Secretary of State’s investments in two London buildings, including the building at 60 Sloane Avenue, now at the center of Vatican financial investigations.

In reference to another suspect transaction the auditor’s office communicated to Pope Francis, Milone said: “I alerted the pope to everything I discovered.”

Bishop Nunzio Galantino, APSA president since 2018, told the Italian newspaper il Fatto Quotidiano that, although he was not working at APSA at the time of the reported investment, he was that certain that “ethical criteria are followed for investments” today.

Pope Francis issued a new anti-corruption law on April 29, requiring Vatican money managers to declare that they do not hold shareholdings or interests in companies that operate “with purposes and in sectors contrary to the Social Doctrine of the Church.”