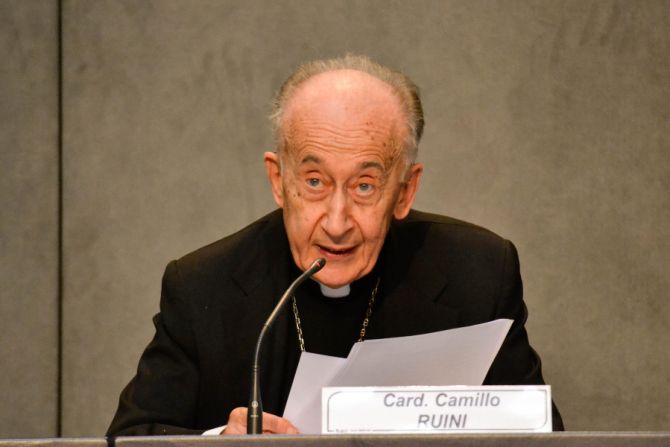 Italian Cardinal Camillo Ruini has said that he is praying there will be no schism in Germany, as priests and bishops in the country announce their disagreement with a document from the Vatican saying the Church cannot bless same-sex unions.

In a May 4 interview with the newspaper Il Foglio, Ruini said: “I hope with all my heart that there will not be any schism, and I pray for this.”

The 90-year-old cardinal referenced Pope Francis’ 2019 letter in which he asked German Catholics to keep a “connection with the universal Church.”

“These words of the pope offer a standard and a valuable direction,” Ruini said. “I do not deny, therefore, that there is a risk of schism, but I trust that, with God’s help, it can be overcome.”

Ruini’s comments come after a number of priests and bishops in the German-speaking world have expressed support for blessings for same-sex partnerships, despite a recent document from the Vatican Congregation for the Doctrine of the Faith (CDF) which said the Church cannot bless such unions.

In Germany, Catholic pastoral workers have planned a nationwide event on May 10 in defiance of the Vatican ruling. Organizers hope that same-sex couples across Germany will take part in the initiative, known as “Segnungsgottesdiensten für Liebende,” or “blessing services for lovers.”

The CDF published a “Responsum ad dubium” March 15, with the approval of Pope Francis, replying to the question, “does the Church have the power to give the blessing to unions of persons of the same sex?” The CDF answered, “Negative,” outlining its reasoning in an explanatory note and accompanying commentary.

“God himself blesses the sinful man so that he allows himself to be changed by Him, but He cannot bless sin,” he added.

Ruini has a reputation for speaking out on social and political issues related to the Catholic Church, and, especially during his years in leadership positions, made frequent media appearances.

He joins other Catholic cardinals and bishops who have recently expressed concern about the situation of the Church in Germany.

In an interview with Colm Flynn that aired on EWTN last month, Australian Cardinal George Pell said he thought that “there is a percentage of the German Church that seems to be resolutely heading in the wrong direction.”

English Bishop Philip Egan of Portsmouth has said that he is worried the German Church’s “Synodal Way” could lead to a “de facto schism.”

Ruini emphasized May 4 that “the Church today is against every unjust discrimination of homosexual persons and wishes that they would be welcomed in the Christian community with respect and consideration.”

The object of dispute, he continued, “lies in the moral evaluation of homosexual relationships and the unions that involve them.”

“According to the constant teaching of Sacred Scripture, the Old and New Testament, and ecclesial tradition, homosexual acts are intrinsically disordered,” he said, “because they are not suitable for transmitting life and are not based on a true affective and sexual complementarity. Therefore, in no case can they be approved.”