A statue of Our Lady in Medjugorje, Bosnia and Herzegovina. | Gnuckx via Flickr (CC BY 2.0).

Medjugorje’s shrine of Our Lady Queen of Peace will lead the global rosary marathon for an end to the coronavirus pandemic on Saturday.

Catholics gathering on May 15 in the town where six local children saw alleged apparitions of the Virgin Mary starting in 1981 will offer the rosary “for all migrants.”

The shrine in southwestern Bosnia and Herzegovina is the 15th of 30 Catholic shrines across the world to lead the rosary during the month-long initiative launched by Pope Francis.

The rosary will take place at 6 p.m. local time, followed by Mass, and will be live-streamed on the Vatican News YouTube channel.

Pope Francis approved Catholic pilgrimages to Medjugorje in May 2019, but he has not issued a formal judgment on the authenticity of the alleged apparitions.

The reputed apparitions began on June 24, 1981, when six children in Medjugorje, a town that was then part of communist Yugoslavia, began to experience phenomena which they reported to be apparitions of the Blessed Virgin Mary.

According to the alleged seers, the apparitions contained a message of peace for the world, a call to conversion, prayer, and fasting, as well as certain secrets surrounding events to be fulfilled in the future.

The purported apparitions at the site have been a source of both controversy and conversion, with many flocking to the town for pilgrimage and prayer, with some people claiming to have experienced miracles and others concluding that the visions are not authentic.

Pope Francis visited Bosnia and Herzegovina in June 2015 but declined to stop in Medjugorje during his trip. During his return flight to Rome, he indicated that the process of investigation was nearly complete.

On the return flight from a visit to the Marian shrine of Fatima in May 2017, the pope spoke about the final document of the Medjugorje commission, sometimes referred to as the “Ruini report,” after the head of the commission, Cardinal Camillo Ruini, calling it “very, very good,” and noting a distinction between the first Marian apparitions at Medjugorje and the later ones.

“The first apparitions, which were to children, the report more or less says that these need to continue being studied,” he said, but as for “presumed current apparitions, the report has its doubts,” the pope said.

The pope launched the prayer marathon on May 1, when he led the rosary in St. Peter’s Basilica. The initiative will end on May 31 with a rosary in the Vatican Gardens.

The first shrine to lead the rosary was Walsingham in England, followed by the shrine of Jesus the Savior and Mother Mary in Elele, Nigeria, on May 2, the shrine of Jasna Góra in Poland on May 3, and the Basilica of the Annunciation in Nazareth, Israel, on May 4.

“The great example of the Church that is young in the heart, ready to follow Christ with new freshness and fidelity, always remains the Virgin Mary,” the pope said.

“The power of Her ‘Yes’ and Her ‘Let it be unto me’ which she said before the angel, delights us at all times. Her ‘Yes’ means to participate and take risks, without any guarantee except knowing that she is the bearer of the promise. Her ‘Behold the handmaid of the Lord’ (Luke 1:38), the most beautiful example that tells us what happens when a man, in his freedom, surrenders himself into God’s hands.”

“Let this example inspire you and be your guideline!”

A laicized priest who had been the spiritual director to six people who said they experienced visions of the Blessed Virgin Mary in the Bosnian town of Medjugorje has been excommunicated. 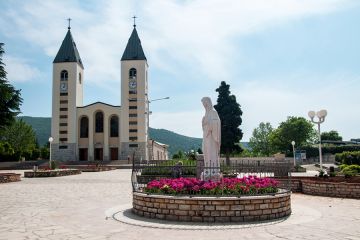 Pope Francis tells youth at Medjugorje: be inspired by the Virgin Mary

Pope Francis has urged young people gathered in Medjugorje to imitate the Virgin Mary by abandoning themselves to God.