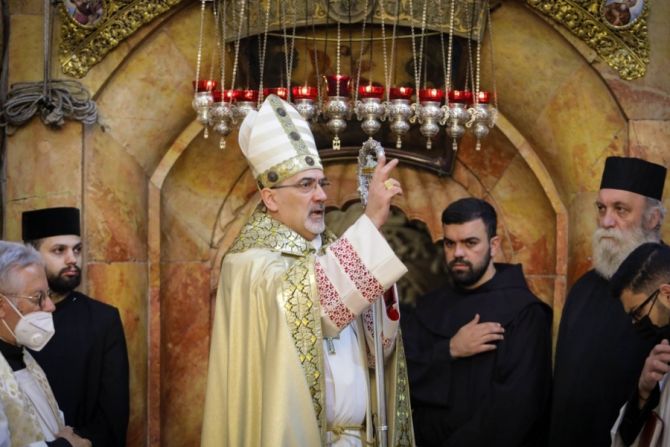 Patriarch Pierbattista Pizzaballa blesses the congregation at the Church of the Holy Sepulchre in Jerusalem on April 4, 2021. | Latin Patriarchate of Jerusalem.

Patriarch Pierbattista Pizzaballa has urged Catholics worldwide to pray for “peace and justice” as violence racks the Holy Land.

The Latin Patriarch of Jerusalem issued the appeal for prayers May 18 as the death toll mounts in the Israel-Gaza conflict.

He told EWTN News: “It is important that all the Church will join the mother Church of Jerusalem in the prayer of intercession for peace and justice in the Holy Land.”

“Every Christian in any part of the world is spiritually born here, because our faith is rooted here, in this Land. For that reason, the suffering in the Holy Land is painful in the whole Church.”

“All together, therefore, as one body, we should be committed to raise our prayer to the Lord, our Father, for all His children of the Holy Land.”

The 56-year-old Church leader, who was appointed Latin Patriarch in October, also issued a reflection on the causes of the current conflict, which has claimed more than 200 lives.

Pizzaballa said that the fighting was just the latest eruption in a cycle of violence between Israelis and Palestinians.

“Unfortunately, this is not the first time and I fear not even the last in which we will have to deal with these explosions of violence and war in the Holy Land,” he commented.

“These outbreaks of violence will only leave more rubble, deaths, animosities, and feelings of hatred, but they will bring no solution. We will see mutual accusations on the use of power, probably we will resort to international courts, accusing each other, but in the end, everything will be as before, until the next crisis.”

He continued: “Until we decide to really face the problems that have afflicted these countries and these peoples for decades, in fact, I fear that we will be forced to witness more violence and other grief.”

The crisis began on May 6 with Palestinian protests against an upcoming ruling by the Supreme Court of Israel on the eviction of six Palestinian families from the Sheikh Jarrah neighborhood in East Jerusalem. The protests led to clashes with Israeli police.

Palestinian militant groups then fired rockets from the Gaza Strip into Israel, prompting airstrikes by the Israel Defense Forces.

Pizzaballa said: “Jerusalem is the heart of the problem and this time it was the spark that ignited the country. As is well known, it all started with the well-known question of Sheikh Jarrah, which has been presented as a legal question.”

Referring to a May 10 statement by the Latin Patriarchate, he said: “However, as we have already reiterated in our previous declaration, it is also evidently a political decision of further expansion of Israeli settlements in East Jerusalem.”

“It is a decision which changes the already many times broken balance between the two parts of the city and this creates tensions and suffering.”

“This crisis, however, indicates that this methodology does not work and that no solution on Jerusalem can be imposed. The solution can only be the result of the dialogue between Israelis and Palestinians, who will both have to make their own the open, multi-religious and multicultural vocation of the city.”

The leader of Latin Catholics in Israel, the Palestinian territories, Jordan, and Cyprus said that this principle applied not only to Jerusalem but also to the wider Israeli-Palestinian dispute.

He said: “The Palestinian people have been waiting for years for a dignified solution, a serene and peaceful future, in their land, in their country. For them, however, there seems to be no place in the world and, before being able to live with dignity at home, they are continually invited by the various chancelleries to await an unknown and continually postponed future.”

Pizzaballa, a Franciscan friar who served as apostolic administrator of the Latin Patriarchate from 2016 to 2020, suggested that the international media had not given adequate coverage to another “worrying” development: intercommunal violence between Jewish and Arab citizens in Israeli cities.

He said: “We have witnessed violence, organized patrols, lynching attempts on both sides, Jews and Arabs ... an explosion of hatred and rejection of the other that probably had been brewing for some time and that has now emerged violently and has found everyone unprepared and frightened.”

He argued that the clashes resulted from years of “violent political language” that had driven an “ever-deeper” wedge between the two peoples.

“It will take a long time to rebuild these deeply wounded relationships. We will have to work with the many people, of all faiths, who still believe in a future together and are committed to it. They are a lot. But they need support, someone who can bring their voice to the whole world,” he said.

“We will have to start rebuilding the relationships between all of us all over again, and in this sense, it will be a priority to start from the painful discovery of these days, that is, from the hatred that harbored above all in the hearts of young people.”

“We must not cultivate or allow feelings of hatred to develop. We must make sure that no one, whether Jewish or Arab, feels rejected.”

Speaking after his Regina Coeli address on May 16, Pope Francis called for an end to the violence.

“In these days, violent armed clashes between the Gaza Strip and Israel have gained the upper hand, risk degenerating into a spiral of death and destruction,” he said.

“Many people have been injured and many innocent people have died. Among them are even children, and this is terrible and unacceptable.”

On May 17, the pope discussed the conflict with Turkish President Recep Tayyip Erdoğan and Iranian foreign minister Mohammad Javad Zarif.

Pizzaballa, who was born in northern Italy, said that community leaders would need to be clearer in denouncing divisive actions.

“We cannot be any more satisfied with interreligious peace meetings, thinking that with those initiatives we have solved the problem of coexistence among us,” he observed.

“But we will really have to commit ourselves so that in our schools, in our institutions, in the media, in politics, in places of worship, the name of God, of brother and of life partner, resonates.”

“We will have to learn to be more attentive to the language we use and become aware that the reconstruction of a serious model of relations between us will require a long time, patience, and courage.”

“We will need a new alliance, between people of goodwill who, regardless of faith, identity, and political vision, feel the other as part of themselves and wish to commit themselves to live with this conscience.”

He added that before the outbreak of violence world leaders had appeared to have “forgotten” the Israeli-Palestinian dispute. He called for it to be placed at the top of the international agenda.

“The wound was only covered, hidden, but never healed,” he said.

Citing John 14:27, he concluded: “I invite you to pray for the Church of Jerusalem, so that it may be a Church that goes beyond closed walls and doors; that she believes, announces, builds peace, but ‘not as the world gives it.’”

“The Church will have to build the peace which is the fruit of the Spirit, who gives life and trust, always anew, without ever getting tired.”