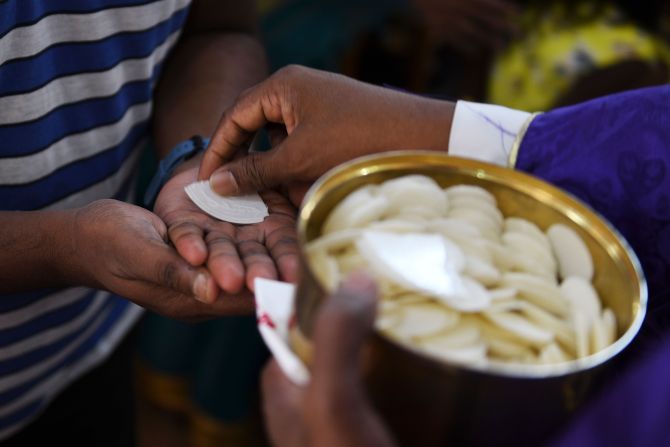 Where did the term eucharistic coherence originate?

This is the full paragraph:

“We hope that legislators, heads of government, and health professionals, conscious of the dignity of human life and of the rootedness of the family in our peoples, will defend and protect it from the abominable crimes of abortion and euthanasia; that is their responsibility. Hence, in response to government laws and provisions that are unjust in the light of faith and reason, conscientious objection should be encouraged. We must adhere to ‘eucharistic coherence,’ that is, be conscious that they cannot receive holy communion and at the same time act with deeds or words against the commandments, particularly when abortion, euthanasia, and other grave crimes against life and family are encouraged. This responsibility weighs particularly over legislators, heads of governments, and health professionals.”

Why is eucharistic coherence linked so closely to abortion and euthanasia?

The theology of eucharistic coherence builds upon the teachings of the Church contained in the encyclical Evangelium Vitae and the post-synodal exhortation Sacramentum Caritatis. U.S. bishops referencing the term are thus using a term squarely coined by reflection upon magisterial teaching.

Evangelium Vitae, footnoted in Aparecida document paragraph 436, highlights the gravity of abortion and euthanasia, the clear need to oppose all laws that claim to legitimize them, and the prohibition against formal cooperation with this evil, while Sacramentum Caritatis more specifically explores the ramifications of living these teachings on reception of the eucharist.

According to Benedict XVI, eucharistic consistency, a term coined in Sacramentum Caritatis, recognizes the “objective connection” between the Eucharist and the fundamental values a Catholic must hold to in personal and public life, including “respect for human life, its defense from conception to natural death, the family built upon marriage between a man and a woman, the freedom to educate one's children and the promotion of the common good in all its forms.”

Why is eucharistic coherence linked with Catholic politicians in particular?

Published just three months before the Aparecida document, Sacramentum Caritatis reflects the development of the thought of Pope Benedict XVI. As head of the Congregation for the Doctrine of the Faith, he wrote a memorandum to the U.S. bishops in 2004 in response to debate concerning Democratic presidential candidate and abortion proponent John Kerry presenting himself for reception of holy communion.

Among the principles included in the memorandum are whether a Catholic is in full communion with the Church, guilty of grave sin or under penalty of excommunication or interdict, and whether the person fasted for one hour.

The memorandum also detailed that when cooperation with abortion and euthanasia becomes manifest—“understood, in the case of a Catholic politician, as his consistently campaigning and voting for permissive abortion and euthanasia laws”—the pastor should deny Holy Communion if the politician does not repent after a private meeting instructing the person on the Church’s teaching. This follows the prescription outlined in Canon Law by Canon 915.

Sacramentum Caritatis further develops the duties of Catholics in public life to affirm fundamental, non-negotiable values, preventing them from divorcing personal beliefs from public duties and reminding them of “their grave responsibility before society.”

The Aparecida document likewise references the duties of legislators and heads of governments with regard to life issues, namely, to oppose the “abominable crimes of abortion and euthanasia” or recognize that they cannot receive holy communion.

Why do medical professionals have special responsibility to live eucharistic coherence?

The Aparecida document makes clear that defense of human life and eucharistic coherence is not limited to government officials; rather, it is the special duty of every baptized doctor, nurse, and healthcare worker to uphold the dignity of life or refrain from receiving the eucharist.

“’Causing death’ can never be considered a form of medical treatment, even when the intention is solely to comply with the patient's request,” wrote John Paul II in Evangelium Vitae. “Rather, it runs completely counter to the health-care profession, which is meant to be an impassioned and unflinching affirmation of life.” John Paul II called on health care professionals to exercise conscientious objection rather than participate in the evils of abortion and euthanasia.

In a speech to the Pontifical Academy for Life Benedict XVI reaffirmed that “every human community and the political community itself are founded” on the right to life.  Accordingly, professionals, doctors, and lawyers must engage in “courageous objection of conscience” to the evils threatening the right to life.

Why is eucharistic coherence connected to the USCCB spring 2021 meeting next week?

In 2004, Joseph Ratzinger penned a memo to the USCCB while the U.S. bishops were embroiled in the Kerry communion debate. The discussion soon broadened to  pro-choice politicians in general. In 2006, as a response to these questions and the implications for all Catholics, the USCCB published a document on preparation to receive the Eucharist worthily.

A crisis of faith in the belief in the Eucharist among Catholics writ large revealed itself in intervening years. In 2019, a Pew Research report confirmed that only 31% of Catholics believed in the doctrine of the real presence of the Eucharist. The urgency of the question about worthy reception of the Eucharist resurfaced as prominent Catholic and abortion supporter Joe Biden, a Democrat, began his own presidential run.

A working group on eucharistic coherence formed in November 2020 to deal with the question of scandal posed by such a prominent public figure receiving holy communion. The group, headed by USCCB vice president Archbishop Allen Vigneron, proposed the creation of a document on the Eucharist--a document aimed at all Catholics and not specifically at one politician.

In recent months the use of the term eucharistic coherence exploded, and bishops across the country are defending the long-standing church teaching behind the term and its implications for politicians and medical professionals, as well as the general Catholic population, based on an understanding of the fundamental nature of the right to life.

The current head of the Congregation of the Doctrine of the Faith, Cardinal Luis Ladaria, also affirmed the need for eucharistic coherence in a letter to U.S. Bishops, widely mischaracterized as asking for a pause in the normal USCCB procedures.

The bishops will discuss an outline of a draft document on the eucharist elaborated by the Committee of Doctrine during their June 2021 spring meeting next week. The meeting will be held virtually June 16-18, 2021.

While some activists claim that the U.S. bishops will be voting next week on denying Communion to President Joe Biden, the bishops will be considering a number of items at their annual spring meeting – none which specifically concern Biden.