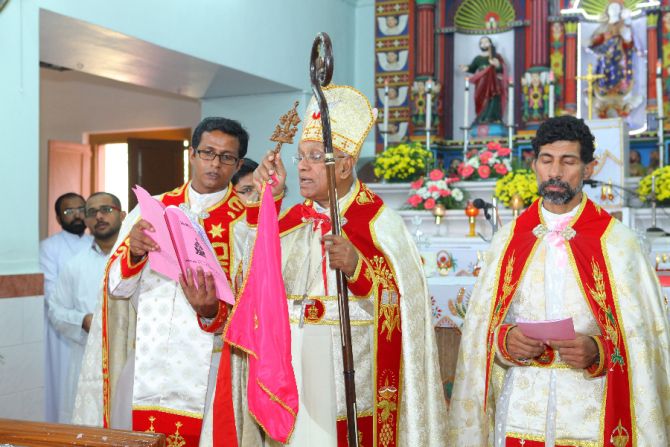 Pope Francis has written a letter to leaders of the Syro-Malabar Catholic Church urging the implementation of a more uniform offering of their liturgy.

More than 20 years after the Synod of Bishops of the Syro-Malabar Church agreed unanimously to standardize their Eucharistic liturgy, called the Holy Qurbana, the Eastern Church has continued to face division and conflict.

In the letter published by the Vatican on July 6, Pope Francis exhorted “all the clergy, religious and lay faithful to proceed to a prompt implementation of the uniform mode of celebrating the Holy Qurbana, for the greater good and unity of your Church.”

“I strongly urge the Syro-Malabar Bishops to persevere, and I confirm their ecclesial ‘walking together’ with God’s people, trusting that ‘time is greater than space’ and that ‘unity prevails over conflict,’” Francis wrote in the letter dated July 3, the day before the pope underwent a surgery at Rome’s Gemelli Hospital.

July 3 is a significant date for Syro-Malabar Catholics as it is the feast of St. Thomas the Apostle, who is believed to have brought Christianity to India.

The Syro-Malabar Church is one of the 23 Eastern Catholic Churches in full communion with Rome. Based in Kerala, southern India, the Church has more than four million members worldwide. It uses the ancient East Syriac Rite and the vernacular language of its liturgies is Malayalam.

In addition to India, there are Syro-Malabar eparchies, or dioceses, in the U.K, U.S., Canada, and Australia.

Pope Francis wrote that the decision of the 1999 Synod of Bishops of the Syro-Malabar Church to bring uniformity to their liturgy was “an important step towards increasing the stability and ecclesial communion within the whole body of your beloved Church” that gave “joyful confidence in your sui iuris [autonomous] Church to my saintly predecessor Pope John Paul II.”

“Notwithstanding some difficulties, which require ongoing discernment in the life of your vibrant Church, the approved norms for the Eucharistic celebration have borne considerable fruit including evangelization in those places, especially the missionary Eparchies, where the whole community has joined in peaceful and prayerful observance, interpreting the continuing consensus of the Hierarchy as a fruit of the Holy Spirit,” the pope said.

Pope Francis wrote that he entrusted Syro-Malabar Catholics to the intercession of the Blessed Virgin Mary, St. Joseph, and St. Thomas.

“May the Holy Spirit foster harmony, fraternity and unity among all members of your Church as you work to implement the Synodal decision,” he said. Pope Francis has approved the advancement of the causes of eight Servants of God, all priests and religious, including Fr. Varghese Payyappilly of the Syro-Malabar Catholic Church, based in Kerala, India.

The cause for beatification of Father Varkey Kattarath, founder of the Vincentian Congregation, was opened Wednesday at a ceremony in India.