Cyclists will be riding across the country beginning July 11, to raise awareness for the unborn and to fundraise for pregnancy resource centers.

This year, 50 college students and young adults across the country will be riding an average of 100 miles a day for a combined 2,700 miles, with the nonprofit Biking for Babies.

Now in its 12th year of holding bicycle rides for the pro-life cause, Biking for Babies aims to raise $225,000 this year for pregnancy resource centers. By hitting its goal, the group will have surpassed its cumulative $1 million donation mark for its history.

Biking for Babies was started by board chairman Jimmy Becker and his friend Mike Shaefer in March 2009. The two young men took their bikes to Southern Illinois University Carbondale, with the goal to bicycle 600 miles to fundraise and raise awareness for pregnancy resource centers. They raised over $14,000 for a local pregnancy resource center on that first journey.

Biking for Babies began its first national ride in 2010, when cyclists traveled for eight days from New Orleans to Champaign, Illinois.

Riders hail from around the nation including groups leaving this year from Green Bay, Wisconsin; Columbus, Ohio; Natchez, Mississippi.; and Holly, Colorado. The teams will be the largest in the organization’s history, and they will all converge together for a “celebration of life” in St. Louis only five days later on July 17th.

The cyclists wear yellow “Biking for Babies” jerseys, with painted support vehicles traveling alongside them. Onlookers often stop to ask about their mission.

“It is these encounters that invite others into the mission and move hearts to support life,” the group’s website says.

The bikers train for months for their ride across the country. They also spend months learning about their local pregnancy resource center and its primary mission, in order to share its story and pray for the center during their ride.

Pregnancy resource centers are also encouraged to fill out an application on the Biking for Babies website to partner with the organization.

Once the application is accepted, Biking for Babies and the pregnancy resource center begin a relationship mediated by a missionary, so both organizations can learn from each other.

In the past, the national ride has included routes from Florida, Texas and Louisiana to the destination of Chicago. In 2017, the cyclists carried a cross into St. Louis.

“We exist to bring light into the darkness of our culture; we exist to invite others into a life of action, to spread hope by our physical witness on the roads,” the group said in its press release. 'Overwhelmed with graces': Walking across America for life

Victoria Bliss, a 19-year-old from Virginia, said the experience, while full of challenges, was one that strengthened her faith and inspired her to continue doing pro-life work. 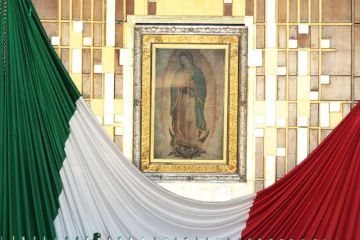 Walking, biking pilgrimage to Our Lady of Guadalupe draws 60,000

By foot and by bicycle, some 60,000 people arrived at the Guadalupe Basilica in Mexico City on July 22, for a pilgrimage that covered more than 185 miles from Querétaro state. A Catholic teacher who finished a pilgrimage to the Spanish Missions in California this week has emphasized his devotion to the first missions’ founder, St. Junipero Serra, and their influence on him as an educator.