After Catholics in the Cleveland diocese participated in a “Nine Nights of Night Prayer” initiative earlier this month, the diocese will hold a second round later this year.

The event, which featured nine consecutive nights of night prayer at nine different parishes in the diocese from Aug. 7 through Aug. 15, will be held again from Nov. 30 to Dec. 8, ending on the solemnity of the Immaculate Conception.

The diocese’s vicar for evangelization told CNA that the initiative earlier this month drew both Catholics and non-Catholics, and that parishioner feedback was positive.

“Most of the participants were practicing Catholics, but lapsed Catholics and non-Catholics did attend,” said Fr. Damian Ference, vicar for evangelization for the diocese of Cleveland, in an email interview with CNA on Tuesday.

Fr. Ference noted that one “young man” had prayed night prayer for the first time this month during the initiative, at St. John Cantius parish in Cleveland. The man attended a second night of prayer at St. Michael the Archangel parish in Cleveland, and is now interested in joining RCIA, he said.

The nine-day prayer initiative ended on the solemnity of the Assumption of the Blessed Virgin Mary. Each night consisted of 45 minutes of night prayer, part of the Liturgy of the Hours.

Ference told CNA that many participants were introduced to night prayer for the first time. “Many of the participants had not prayed the Liturgy of the Hours before, and most had never prayed night prayer nine nights in a row,” he said. “People enjoyed the brevity and simplicity of Night Prayer and they also enjoyed visiting different churches - beautiful ones at that.”

Ference praised the nine pastors who “were so very willing” to offer their parishes for public prayer.

“We probably could have given them more time and more instruction and done more advertising, but I only started this new assignment on Jul. 12, so I think when we try it again working up to the Feast of the Immaculate Conception we'll have worked out most of the wrinkles,” he said.

Some of the participating parishes brought in 40 to 50 people a night, Ference said. “There are 185 parishes in the Diocese of Cleveland, and they are all very different, so it makes sense that the turn-out at each parish would look a little different.”

On the last night of prayer, participants were able to try a “Marian” flavored ice cream, Stella Maris. Fr. Ference created the ice cream with the help of a local Catholic who owns an ice cream parlor.

“Dave Hovanec helped me create Stella Maris, which is basically Blue Moon ice cream with little yellow stars in it, candy-covered pieces of chocolate,” he said. Ference added that the ice cream was “sweet like Our Lady,” noting that “some said it tasted like heaven.”

Ference, the diocese’s new vicar for evangelization, ran the initiative in order to fulfill the mission of his new role.

“This event is appropriate to my new mission because the endeavor was designed to make it easy to drop in to a Catholic church in the evening and pray, especially for the non-practicing or non-Catholic,” he said. “It's first level evangelization.”

The next “Nine Nights” initiative will commence on Nov. 30.

“There will be a new ice cream commissioned for round two, but I will not tell you anymore,” Ference told CNA. 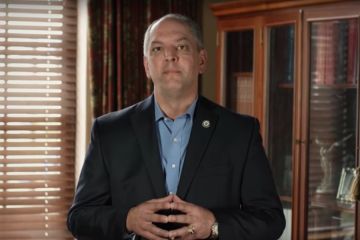 Calls for prayer and fasting have once again sounded from the Louisiana Governor’s office as Covid-19 continues to endanger lives in the state.