Sr. Alessandra Smerilli speaks at a press conference at the Vatican on July 7, 2020. | Daniel Ibáñez/CNA.

Smerilli was appointed “ad interim” secretary of the Dicastery for Promoting Integral Human Development following the departure of secretary Msgr. Bruno Marie Duffé and deputy secretary Fr. Augusto Zampini, who have returned to their home dioceses, the Vatican announced Aug. 26.

The 46-year-old Salesian sister is an economist and professor. She has been an undersecretary at the human development dicastery since March 24 and was one of the principal organizers of the 2020 Economy of Francesco event.

Since 2019, Smerilli has also served as a councilor of the Vatican City State and a consultant to the secretariat of the Synod of Bishops. In spring 2020, she was asked to coordinate the economic taskforce of the Vatican COVID-19 Commission.

On Aug. 26, Pope Francis also named Smerilli delegate of the COVID-19 commission of the Vatican, meaning that the commission is now under the exclusive leadership of Smerilli, Fr. Fabio Baggio of the Migrant and Refugees section, and human development prefect Cardinal Peter Turkson.

The changes at the Dicastery for Promoting Integral Human Development follow a recent inspection carried out by Cardinal Blase Cupich of Chicago.

The July apostolic visitation was one of several inspections that have taken place at Vatican dicasteries ahead of the expected release of a new apostolic constitution governing the Roman Curia.

As reported by Vatican News, Duffé, 70, leaves the Vatican at the conclusion of a four-year mandate and returns to the Archdiocese of Lyon in France.

Zampini, 52, joined the Vatican in 2017. He was deputy secretary of the human development dicastery from April 2020 and now returns to the Diocese of San Isidro in his native Argentina.

In an Aug. 26 update on the dicastery’s website, Zampini said that he was “grateful to the Holy Father for entrusting me with the challenging task of coordinating the Vatican COVID-19 Commission and serving as adjunct secretary of the dicastery.”

“Now that the commission is ready to enter a new phase, and in accordance with my bishop, I have asked Pope Francis to be allowed to return to my diocese,” he said.

Smerilli is one of two women to hold a second-ranking position in an important Vatican office, after the nomination of Sr. Nathalie Becquart to the Synod of Bishops in February.

Smerilli said that she was grateful to Pope Francis for “the demanding task” he had asked her to take on.

“I pray to the Lord to help me to honor this call in a spirit of obedience to the Church, with humility, passion, creativity, and ability to listen that it requires,” she commented.

“My desire and commitment is to serve the mission of the Church in the best possible way, for as long as the pope sees fit.” The inspection will begin in a few days. 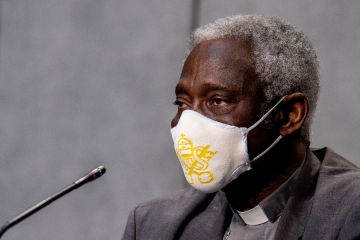