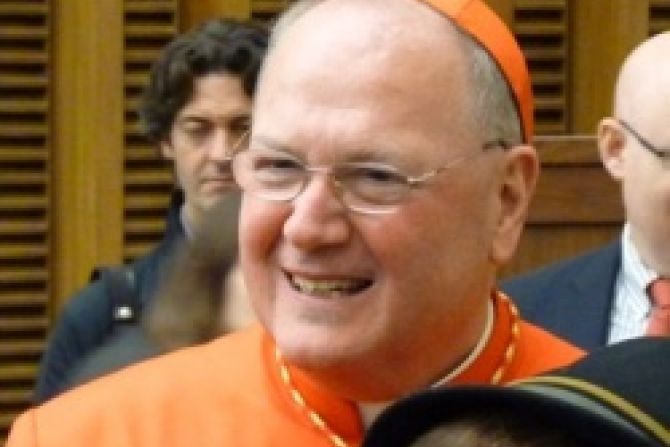 The bishops "cannot be silent in the face of words or actions that would undermine the institution of marriage, the very cornerstone of our society," he said in a May 9 statement. "The people of this country, especially our children, deserve better."

Cardinal Dolan said that the announcement was "not surprising" based on the Obama administration's previous actions, which "erode or ignore the unique meaning of marriage."

He called for prayer and efforts to "promote and protect marriage" in order to "serve the true good of all persons."

In an unprecedented move, Obama announced his support for "same-sex marriage" in a May 9 interview with ABC News' Robin Roberts.

"I've just concluded that for me personally it is important for me to go ahead and affirm that I think same-sex couples should be able to get married," he said.

Previously, Obama had stopped short of endorsing "gay marriage," saying instead that he opposes discrimination against gay individuals but that his views on the question of marriage were "evolving."

However, his actions as president have won the praise of gay advocacy groups.

His administration announced in Feb. 2011 that it would not uphold the 1996 Defense of Marriage Act, which defines marriage as the union of one man and one woman for federal purposes.

He also signed a law repealing the "Don't Ask, Don't Tell" policy, allowing homosexuals to serve openly in the military.

Obama's latest statement places him in firm disagreement with presumptive GOP presidential nominee Mitt Romney, who has signed a pledge to uphold marriage as the union of one man and one woman.

Romney was quick to voice his opposition to Obama's stance.

"I have the same view on marriage that I had when I was governor and that I've expressed many times," he said at a May 9 campaign event in Oklahoma. "I believe marriage is a relationship between a man and a woman."

He explained that states can "make decisions with regards to domestic partnership benefits, such as hospital visitation rights," but "marriage itself is a relationship between a man and a woman."

Acknowledging that the issue is "a very tender and sensitive" one about which "other people have differing views," Romney reiterated his own conviction, which he has held "since running for office."

Several political commentators have suggested that Obama's support for "gay marriage" does not reflect the views of the American people and could have a significant political impact in the  November 6, 2012 election.

He warned that if Obama's advocacy for same-sex "marriage" succeeds, "Catholic institutions could be forced once again to violate our beliefs."

"Many faithful Catholics were fooled by clever political rhetoric in 2008," added Smith. "This year, the anti-Catholic record of the Obama administration should inform their vote."

So far, 30 states have passed constitutional amendments banning "gay marriage," including North Carolina, where voters approved such a measure by an overwhelming margin on May 8.

Tony Perkins, president of the D.C.-based Family Research Council, pointed to the recent North Carolina vote as evidence that "redefining marriage remains outside the mainstream of American politics, especially in the critical battleground states and among minority voters."

He observed that the North Carolina amendment received over 60 percent of the vote in majority-black counties.

A Pew Research Center survey in April 2012 found that only 39 percent of African Americans are in favor of "gay marriage."

Perkins noted that 10 of 16 key battleground states have passed amendments to protect marriage. He said that Obama's announcement "ensures that marriage will again be a major issue in the presidential election."