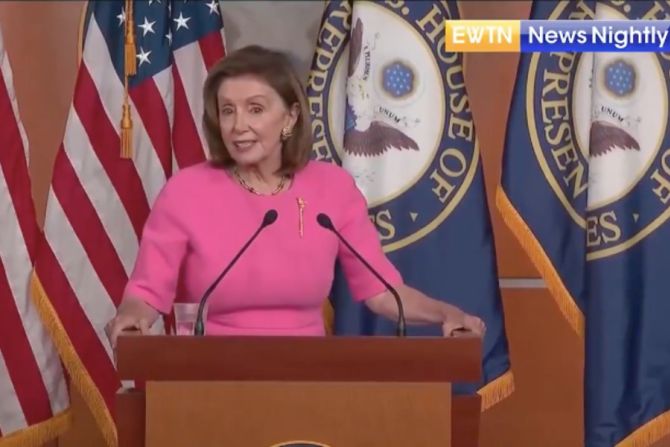 The Women’s Health Protection Act, legislation that would override state abortion laws and allow for abortions in some cases throughout all nine months of pregnancy, is set to be voted on in the House tomorrow, Sept. 24. Pelosi declared earlier this month that she would bring the bill up for a vote in the House. Her local ordinary, Archbishop Salvatore Cordileone of San Francisco, said the bill “is nothing short of child sacrifice,” in a statement on Tuesday.

When asked about Cordileone’s comments at her Thursday press briefing in the U.S. Capitol, Pelosi responded that “it’s none of our business how other people choose the size and timing of their families.”

“The archbishop of the city of that area, of San Francisco, and I had a disagreement about who should decide this [family size and timing]. I believe that God has given us a free will to honor our responsibilities,” she said in response to the question from Erik Rosales, Capitol Hill correspondent for EWTN News Nightly.

The House will vote on the abortion legislation on Friday. Pelosi previewed the vote at her briefing, noting that “this is a very exciting day for some of us in the Congress.”

“Every woman everywhere has a constitutional right to basic reproductive health, yet for years that has been questioned by some,” she said.

Pelosi brought the bill up for a vote following Texas’ pro-life “heartbeat” bill going into effect Sept. 1. The law restricted most abortions following the detection of a fetal heartbeat, which can occur as early as six weeks into pregnancy. It is enforced through private civil lawsuits.

“The Texas law goes beyond a discussion of a woman’s right to choose. It’s about vigilantes and bounty hunters, and something that is so un-American. And it has evoked a response, okay? It’s unconstitutional and unjust,” Pelosi stated on Thursday.

The Women's Health Protection Act, introduced by Rep. Judy Chu (D-Calif.), recognizes the “statutory right” of women to have abortions, and would block many state pro-life laws, such as ultrasound and waiting period requirements before abortions. It overrides prohibitions on “pre-viability” abortions, and allows for late-term abortions without “meaningful” limits, the U.S. bishops’ conference has warned, thus imposing "abortion on demand nationwide at any stage of pregnancy."

In addition, the bill would require taxpayer funding of abortion and could force health care workers to participate in abortions against their consciences, the conference has said.

Archbishop Cordileone on Tuesday said that the bill “is surely the type of legislation one would expect from a devout Satanist, not a devout Catholic.” He called on Catholics to fast and pray for the bill’s defeat.

In the question-and-answer portion of the briefing, Rosales asked Pelosi to respond to Cordileone’s statement as a “Catholic.”

“I’m Catholic. I come from a pro-life family,” she said.

She noted that she had five children in just more than six years. “For us, it was a complete and total blessing, which we enjoy every day of our lives,” she said, before adding it was “none of our business” to make such decisions for other families.

In July, Pelosi cited her Catholic faith before she justified the policy of federal funding of abortion. In response, Archbishop Cordileone stated that “no one can claim to be a devout Catholic and condone the killing of innocent human life, let alone have the government pay for it.”

House Speaker Nancy Pelosi (D-Calif.) on Thursday defended efforts to permit federal funding of elective abortions, and cited her own Catholic faith while doing so.

House Speaker Nancy Pelosi (D-Calif.) on Thursday would not say if an unborn child at 15 weeks was a human being.