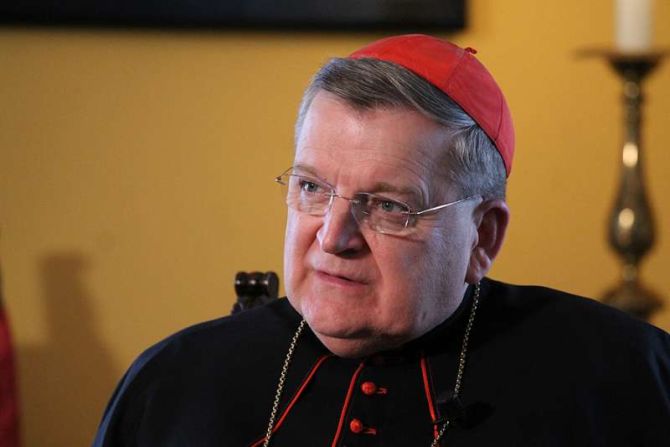 On the eve of President Joe Biden’s meeting with Pope Francis, a U.S. cardinal said that Catholic bishops have a “sacred duty” to apply canon law by advising pro-abortion politicians not to receive Holy Communion.

In a 2,800-word statement issued on Oct. 28, Cardinal Raymond Burke recalled his efforts to persuade Catholic politicians to defend the lives of unborn children while serving as the bishop of La Crosse, Wisconsin, and later of St. Louis, Missouri.

He said that the experience had convinced him that the “common refrain” that more dialogue was necessary to achieve a breakthrough was “at best, naïve.”

The 73-year-old cardinal made the intervention ahead of the U.S. bishops’ plenary assembly in Baltimore, Maryland.

He said that participants in the USCCB’s Fall General Assembly on Nov. 15-18 would discuss the application of Canon 915 of the Catholic Church’s Code of Canon Law.

The canon says: “Those who have been excommunicated or interdicted after the imposition or declaration of the penalty and others obstinately persevering in manifest grave sin are not to be admitted to Holy Communion.”

Burke explained that he was speaking out because the issue was “a matter of life and death for the unborn and of eternal salvation for the Catholic politicians involved.”

He said he had hoped to offer the reflection “much sooner,” but was unable to because of his “recent health difficulties” after testing positive for COVID-19.

In his reflection, the cardinal recalled the U.S. bishops’ debate about Communion for Catholic politicians who defied Church teaching in Denver, Colorado, in June 2004.

He noted that, as the then archbishop of St. Louis, he had “admonished” the Catholic presidential candidate John Kerry not to present himself for Communion due to his support for abortion.

Burke said that he responded “by pointing out that, when I die, I will appear before the Lord to give an account of my service as bishop, not before the Conference of Bishops.”

Recalling the outcome of the USCCB meeting, Burke said: “Ultimately, the President, the then Bishop Wilton Gregory of the Diocese of Belleville, remanded the matter to a Task Force on Catholic Bishops and Catholic Politicians under the chairmanship of the then Cardinal Theodore McCarrick who was clearly opposed to the application of can. 915 in the case of Catholic politicians supporting procured abortion and other practices which gravely violate the moral law.”

“The Task Force was comprised of a group of bishops with mixed views on the subject. In any case, with time, the Task Force was forgotten, and the critical issue was left unaddressed by the Conference of Bishops.”

“When Bishop Gregory announced the Task Force, the bishop sitting next to me observed that we could now be certain that the issue would not be addressed.”

The cardinal insisted that both in La Crosse and St. Louis, he had intervened “pastorally” and in an “appropriately confidential manner” with Catholic politicians. He recalled that the legislators often refused to engage with him.

“Regarding the refusal of the legislators to meet with me, I must observe that I find, at best, naïve the common refrain that what is needed is more dialogue with the Catholic politicians and legislators in question,” he commented.

“In some cases, too, I have had the strong impression that they were unwilling to discuss the matter because they were simply unwilling to have their minds and hearts changed. The truth remains that procured abortion is the knowing and willing destruction of a human life.”

Burke said that following the U.S. bishops’ “difficult” meeting in Denver, he traveled to Rome, where he met with Cardinal Joseph Ratzinger, the prefect of the Congregation for the Doctrine of the Faith who would be elected Pope Benedict XVI in 2005.

“Cardinal Ratzinger assured me that the Congregation had studied my practice and found nothing objectionable about it. He only cautioned me not to support publicly candidates for office, something which, in fact, I had never done,” he recalled.

“He expressed some surprise at my doubt in the matter, given a letter which he had written to the United States bishops, which had addressed the question thoroughly. He asked whether I had read his letter. I told him that I had not received the letter and asked whether he could kindly provide a copy for me. He smiled and suggested that I read it on a popular blog, asking the English-speaking official to make a photocopy of the text as it appeared in its entirety on the blog.”

Burke continued: “The letter in question sets forth in an authoritative manner the Church’s constant teaching and practice.”

“The failure to distribute it to the United States bishops certainly contributed to the failure of the bishops in June of 2004 to take appropriate action in the implementation of can. 915.”

“Now, I am told that it is maintained that the letter was confidential and, therefore, cannot be published. The truth is that it was published, already in early July of 2004, and that clearly the Prefect of the Congregation, who authored it, was not at all disturbed about the fact.”

Burke, who served as prefect of the Apostolic Signatura in Rome from 2008 to 2014, noted that 17 years after the Denver meeting, the U.S. bishops were still wrestling with “the most serious question” of applying Canon 915 to Catholic politicians supporting policies gravely opposed to Church teaching.

“In fact, the obligation of the individual bishop is a matter of universal Church discipline, regarding faith and morals, over which the Conference of Bishops has no authority,” he wrote.

“In fact, a number of bishops have understood their sacred duty in the matter and are taking appropriate action. A Conference of Bishops fulfills an important role of support for the diocesan bishop, but it cannot replace the authority that belongs properly to him. It is the diocesan bishop, not the Conference, that applies the universal law to a particular situation.”

The task of bishops’ conferences, he said, is to help bishops carry out their “sacred duty.”

He said: “What more corresponds to the promotion of ‘the greater good which the Church offers to humanity’ than the safeguarding and fostering of human life created in the image and likeness of God, and redeemed by the Most Precious Blood of Christ, God the Son Incarnate, by correcting the scandal of Catholic politicians who publicly and obstinately promote procured abortion.”

He concluded: “I invite you to pray with me for the Church in the United States of America and in every nation, that, faithful to the mission of Christ, her Bridegroom, she will be faithful, limpid, and uncompromising in the application of can. 915, defending the sanctity of the Holy Eucharist, safeguarding the souls of Catholic politicians who would grievously violate the moral law and still present themselves to receive Holy Communion, thereby committing sacrilege, and preventing the most serious scandal caused by the failure to observe the norm of can. 915.” Cardinal Raymond Burke on Friday said that he is continuing to recover from a bout of COVID-19 and can offer daily Mass now, in a statement posted on his Facebook account. Cardinal Burke's condition is improving, according to the latest update on his battle with COVID-19.

In a 19-point statement regarding Pope Francis' motu proprio Traditionis Custodes, Cardinal Raymond Leo Burke called the restrictions on the Traditional Latin Mass “severe and revolutionary,” and questioned the pope’s authority to revoke use of the rite.