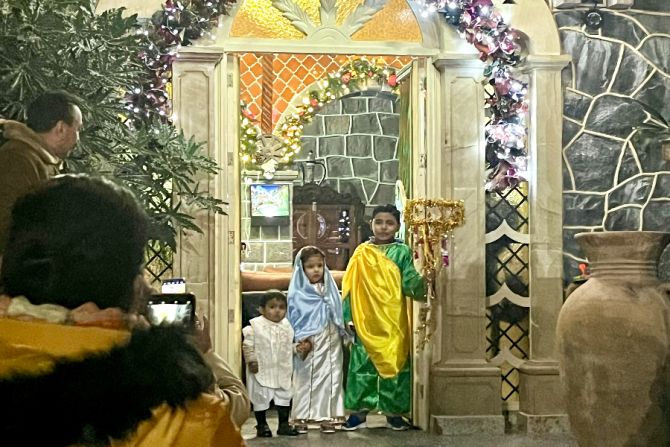 Did you know that the beating of a piñata traditionally follows after Mass and the rosary?

It is just one part of a nine-day Mexican Christmas tradition called “las Posadas,” which takes place each year on Dec. 16-24.

What is Las Posadas?

Las Posadas commemorate Mary and Joseph’s journey from Nazareth to Bethlehem, where they sought shelter for the birth of Jesus. The Spanish word “posada” means “inn.”

The nine-day novena of Las Posadas begins on Dec. 16 and involves the recitation of the rosary followed by a procession, Mass, and a celebration with a piñata on the nights leading up to Christmas.

The procession, or “caminata,” involves a reenactment of Mary and Joseph’s search for an inn. People hold lit candles and sing hymns. The group either carries figurines of Mary and Joseph or has kids dressed up as them.

Neighbors coordinate so that the group will attempt to visit several homes, but be turned away, as there was no room at the inn for the Holy Family.

After the procession, there is a Mass and, finally, a celebration in which blindfolded children attempt to break open the piñata full of candy.

How did the tradition come about?

Pope Sixtus V granted an Augustinian priest, Father Diego de Soria, permission to celebrate the first Posada in 1587 in the Mexican town of Acolman, where he served as a missionary.

The celebration at the Augustinian monastery near Teotihuacán, northeast of Mexico City, involved a novena of nine Masses from Dec. 16 to Christmas Eve.

Father José de Jesús Aguilar, director of sacred art in the Archdiocese of Mexico, described Posadas as another fruit of the inculturation of the Gospel in the Americas.

In a video explaining the origin of the tradition, Aguilar said that the Augustinian missionaries noted the preexisting “nightly celebrations of pre-Hispanic origin and gave them a new meaning: accompanying Mary and Joseph on their pilgrimage to Bethlehem, looking for an inn.”

“Later, other elements were added outside of the church, such as the procession with the pilgrims, the singing of the Marian litany, the request for a Posada, and the piñatas,” Aguilar said.

What is the Christian symbolism in a piñata?

The first piñatas came not long after the first Posada. Spanish missionaries adapted an Aztec tradition in which a clay pot was filled with tiny treasures. The traditional piñata looks like a star with seven points to represent the seven deadly sins of pride, envy, greed, lust, gluttony, sloth, and wrath.

The stick used to beat the piñata represents virtue and being blindfolded represents faith. The candy falling to the ground is symbolic of God’s mercy.

How to have a Posada

If you are hosting a Posada, you need to choose three doors that your group will approach either in your own home or in coordination with your neighbors.

The evening begins with prayer together, usually the recitation of the rosary.

You then divide your guests into two groups — one behind the closed door and the other approaching with Mary and Joseph.

A key component of the Posada is the traditional hymn that has song parts for those who are inside and outside.

For example, on the first approach, the group seeking to enter through the door of the “inn” will sing in Spanish: “In the name of heaven, I beg you for lodging, for she cannot walk, my beloved wife.”

The group behind the closed door will sing in response: “This is not an inn, so keep going. I cannot open, you may be a rogue.”

This can be repeated several times with different verses of the song, until the tune changes and everyone sings in unison as a door is opened: “Enter, holy pilgrims, receive this corner, for though this dwelling is poor, I offer it with all my heart.”

“Oh, graced pilgrim, oh, most beautiful Mary. I offer you my soul so you may have lodging.”

Ideally, the evening culminates with a Mass and concludes with a celebration with delicious Mexican food and a piñata filled with treats.

Las Posadas is just one of many Christ-centered traditions in Mexico for the Christmas season.

Beginning after Christmas Midnight Mass, some Mexican households have a tradition of singing and rocking the baby Jesus to sleep called “Arrullar al Niño Dios.”

Families will have in their homes a large figurine of the newborn baby Jesus, which is placed in a cloth held by two people who gently rock the baby together.

Family members will first pray in thanksgiving to the Lord for the gift of Christ and then take turns rocking the baby as lullaby hymns are sung.

Epiphany on Jan. 6 is a big celebration in Mexico. On the “Día de Reyes,” children wake up to find gifts from the three kings, just as the Magi brought gifts to the child Jesus.

In fact, when Christmas shopping in Mexico, you are just as likely to find the three Magi taking gift requests as a mall Santa.

The family gathers again to wake up the Christ Child, or “levantar al Niño Dios,” on Candlemas by singing another Spanish hymn, “Wake up, beautiful child … see that the day has dawned.”