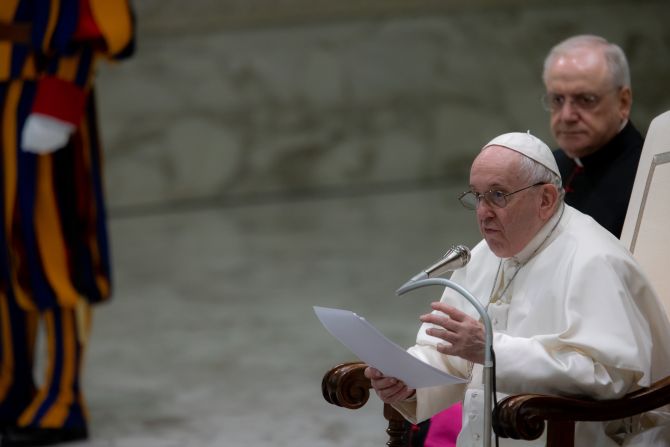 St. Joseph, who protected his family from the persecution of King Herod, teaches us how to respond to our difficulties with courage and to trust in God’s plan, Pope Francis said on Wednesday.

During his weekly public audience Dec. 29, the pope spoke about the contrast between St. Joseph, who acted with courage in the face of hardship and fear, and Herod, who acted with arrogance and violence.

“The lesson that Joseph leaves us today is this: life always reserves adversities for us, this is true, and in the face of them we can also feel threatened, afraid, but it is not by bringing out the worst in us, as Herod does, that we can overcome certain moments, but by behaving like Joseph who reacts to fear with the courage to entrust himself to God’s Providence,” Francis said.

Speaking to pilgrims in the Vatican’s Paul VI Hall, he explained what courage is and what it is not.

“Courage is synonymous with fortitude, which together with justice, prudence and temperance is part of the group of human virtues called ‘cardinal,’” Pope Francis said.

“It is a common misconception to consider courage a virtue exclusive to the hero,” he added. “In fact, the daily life of every person — you, me, all of us — requires courage: one cannot live without courage. Courage to face the difficulties of every day.”

“In all times and in all cultures we find brave men and women, who in order to be consistent with their beliefs have overcome all kinds of difficulties, enduring injustice, condemnation, and even death,” he stated.

The pope also noted that some of the people today who exhibit this courage are immigrants and refugees.

In the Gospel of St. Matthew, we read that St. Joseph, having been warned by an angel in a dream, took Mary and the baby Jesus and fled to Egypt to escape the jealous Herod’s murderous order to kill every male child two years and younger.

This story, known as the “flight into Egypt,” recalls the often dangerous journey people around the world have made to escape violence or hunger in their own country, the pope said.

He added that while Herod is a representation of the many tyrants of both history and today, everyone must be careful not to respond to their own fears by oppressing others.

“It is an attitude we can fall into, every time we try to chase away our fears with arrogance, even if only verbal or made up of small abuses enacted to mortify those around us. We too have within our hearts the possibility of being little Herods,” he said.

St. Joseph is the model we should follow instead, he stated, because “Joseph is the opposite of Herod: first of all, he is ‘a righteous man;’ moreover, he shows courage in carrying out the Angel’s order.”

Pope Francis again reflected on the difficult situation of migrants and refugees today, which he called “a societal scandal of humanity,” which cannot be ignored.

“Today I believe we need a prayer for all migrants, all the persecuted and all those who are victims of adverse circumstances: whether they be political, historical or personal circumstances,” he said.

“Let us think of the many people who are victims of wars and who want to flee their homeland and cannot; let us think of migrants who begin that road to be free and many end up on the road or in the sea; let us think of Jesus in the arms of Joseph and Mary, fleeing, and let us see in Him each of today’s migrants.”

The pope closed his message with a prayer to St. Joseph:

“St. Joseph, you who experienced the suffering of those who must flee, you who were forced to flee to save the lives of those dearest to you, protect all those who flee because of war, hatred, hunger. Support them in their difficulties, strengthen them in hope, and let them to be find welcome and solidarity. Guide their steps and open the hearts of those who can help them. Amen.”