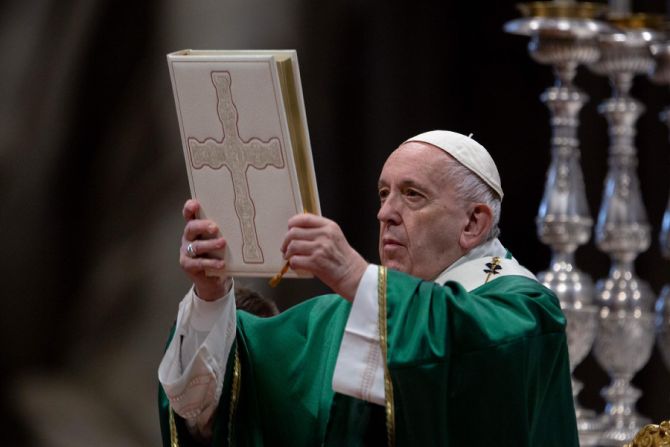 Pope Francis celebrates Mass on the first Sunday of the Word of God Jan. 26, 2020. | Daniel Ibanez/CNA.

The Vatican has announced that Pope Francis will confer the ministries of catechist, lector, and acolyte upon lay men and women for the first time in St. Peter’s Basilica on Sunday.

Candidates from three continents will receive the new ministries during the papal Mass for the Sunday of the Word of God on Jan. 23.

Two people from the Amazonian region in Peru will be formally made catechists by the pope, along with other candidates from Brazil, Ghana, Poland, and Spain.

The ministry of lector will be conferred on lay Catholics from South Korea, Pakistan, Ghana, and Italy.

Each of these ministries will be conferred through a rite prepared by the Congregation for Divine Worship and the Discipline of the Sacraments that will be presented for the first time, according to a Vatican communique issued on Jan. 18.

“Before the homily, the candidates will be summoned, called by name and presented to the Church,” it said.

Those called to the ministry of lector will be presented with a Bible, while catechists will be entrusted with a cross.

In this case, it will be a copy of the pastoral cross used by popes St. Paul VI and St. John Paul II.

According to the apostolic letter Antiquum ministerium, a lay person called to be instituted in the ministry of catechist should have “deep faith and human maturity,” be an active participant in the life of the Christian community, and “capable of welcoming others, being generous and living a life of fraternal communion.”

Among the candidates to be inducted into the ministry by Pope Francis this week is the president of the Roman Oratory Center, which was founded by Arnaldo Canepa, who dedicated more than 40 years of his life to the catechetical instruction of children.

In the apostolic letter Spiritus Domini, the pope modified the Code of Canon Law, which previously limited the ministries to lay men.

After abolishing the minor orders, Pope Paul VI wrote that an acolyte was a ministry in the Church with the “duty to take care of the service of the altar, to help the deacon and the priest in liturgical actions, especially in the celebration of the Holy Mass.”

Potential responsibilities for an acolyte include distributing Holy Communion as an extraordinary minister if such ministers are not present, publicly exposing the Eucharist for adoration in extraordinary circumstances, and “the instruction of the other faithful, who, on a temporary basis, help the deacon and the priest in liturgical services by carrying the missal, cross, candles, etc.”

Due to travel restrictions related to the outbreak of the omicron variant of COVID-19, candidates from the Democratic Republic of the Congo and Uganda will not be able to take part in the Mass, as originally planned. Attendance in St. Peter’s Basilica will also be limited to only 2,000 people as a precaution. On Jan. 11, Pope Francis published an apostolic letter issued motu proprio (which means “on his own impulse” in Latin), modifying canon law regarding women’s access to the ministries of lector and acolyte. He also released a letter to Vatican doctrinal chief Cardinal Luis Ladaria explaining his reasoning for the decision.

Pope Francis has instituted a new lay ministry of catechist. Here’s what that means. 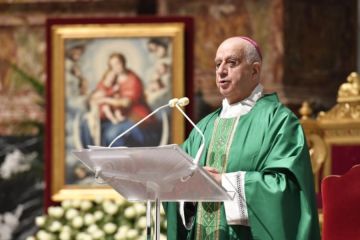