The Vatican opened its first embassy in the United Arab Emirates (UAE) on Friday.

Archbishop Edgar Peña Parra, the Substitute (Sostituto) of the Vatican Secretariat of State, traveled to Abu Dhabi to inaugurate the diplomatic post on the Arabian Peninsula.

“The presence of this new apostolic nunciature is a further sign of the Holy Father’s solicitude and concern for all the people in this land,” Peña Parra said at the opening on Feb. 4.

“It is Pope Francis’ sincere desire that this edifice will assist the papal representative in carrying out his mission to the United Arab Emirates and to the local Catholic community,” he said.

An apostolic nunciature is a diplomatic mission of the Holy See. It is led by a nuncio, who is a papal legate accredited to the civil government.

“The meaning of the opening of a nunciature in this country is very simple: that the Holy Father will have a house here. He will have a house, and at the same time it will be the diplomatic representation of the Holy See in Abu Dhabi,” Peña Parra said in an interview during his trip.

“And I think that this has a spiritual significance, a spiritual meaning, that is the closeness of the Holy Father to the country, and at the same time it is an upgrade in the relations between the two states, the Holy See and this country.”

Noura Al Kaabi, the UAE’s culture minister, and Omar Ghobash, the assistant minister for culture and public diplomacy, attended the nunciature’s opening, along with other officials of the UAE government.

Msgr. Yoannis Gaid, the pope’s former personal secretary, also traveled to the UAE with Peña Parra. Gaid is a member of the Higher Committee of Human Fraternity. Bishop Paul Hinder, the Apostolic Vicar for Southern Arabia, was also present.

The Vatican established diplomatic relations with the UAE in 2007. The former apostolic nunciature was non-residential and based in Kuwait.

There have been three apostolic nuncios to the UAE since 2007. Most recently Archbishop Francisco Montecillo Padilla served as the nuncio from 2016 to 2020.

The post has been vacant since Padilla was transferred to Guatemala. Msgr. Kryspin Dubiel serves as the chargé d’affaires.

The UAE does not currently have a resident ambassador to the Holy See present in Rome.

Earlier this week, Peña Parra offered an inaugural Mass for the new nunciature in St. Joseph’s Cathedral in Abu Dhabi, one of two Catholic churches in the Arabian city that has a population of 1.42 million.

“I dare say that the Catholic community of Abu Dhabi and the Arabian Peninsula as a whole is also an example of hope-filled patience and Christian living,” the archbishop said in his homily.

“You too may be a ‘little flock’ but each part of Christ’s Body the Church has a role to play. No one part is better or more important than the other,” he said.

While few in number, parishes in the United Arab Emirates bring together Catholic traditions and devotions from across the Middle East, South Asia, and the rest of the universal Church.

St. Joseph’s parish was the only Catholic church in Abu Dhabi for more than 50 years, until St. Paul’s Catholic Church opened in the city’s Musaffah district in 2015.

The official religion of the United Arab Emirates is Islam, with a Sunni Muslim majority. About 12.6% of the total population is Christian, according to the Pew Research Center.

The apostolic nunciature in Abu Dhabi opened on the third anniversary of the “Document on Human Fraternity for World Peace and Living Together,” which Francis signed with Ahmed el-Tayeb, Grand Imam of al-Azhar, during an interreligious meeting in Abu Dhabi on Feb. 4, 2019.

Peña Parra said at the nunciature’s opening ceremony that he hoped that the human fraternity document would “serve as a framework for deepening our diplomatic relations.”

Often also referred to as MBZ, the crown prince was among the central figures behind the Abu Dhabi event in which the pope signed the human fraternity document, according to Khaleej Times.

At the nunciature’s inauguration, Peña Parra said that the relationship between the Holy See and the UAE is based “on the mutual understanding of the importance of faith and the positive role that religion should play in society.”

“These efforts are truly needed today as we continue to see the negative consequences of replacing transcendent truths about the human person and creation with purely superficial and materialistic values,” he said.

“May this new embassy of the Holy See serve as a place of encounter and dialogue for our bilateral cooperation for many years to come.” Cardinal Giuseppe Versaldi traveled to the UAE to present the award. 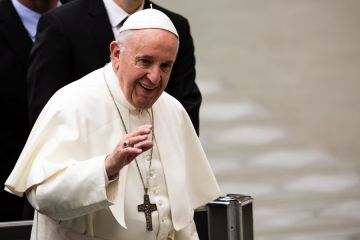 Pope Francis said Wednesday that his recent trip to Abu Dhabi in the United Arab Emirates was a step forward in Catholic-Muslim dialogue and promoting peace among religions.