Pilgrims couldn’t visit Lourdes. So a drone photographer took Lourdes to them The Sanctuary of Our Lady of Lourdes, France. | Célian de La Rochefoucauld via youheritage.com.

In April 2020, as countries across Europe were in lockdown, a young man walked the empty streets of the Sanctuary of Our Lady of Lourdes.

Célian de La Rochefoucauld had been to the French shrine as many as eight or nine times in his life, but he had never seen it so abandoned as the 15 days he spent creating a virtual pilgrimage to one of the world’s most-visited Christian sites.

Since he was 15 years old, La Rochefoucauld had been a volunteer with the Order of Malta. Every year, the sovereign military order brings a group of disabled people on pilgrimage to the Lourdes shrine.

In early 2020, the quickly spreading coronavirus pandemic had canceled the pilgrimage, and the then 29-year-old entrepreneur thought about the disappointment that would cause, and how he could put his drone photography and 3D camera skills to good use.

He called up the Order of Malta and pitched his plan to bring the Catholic shrine directly to the sick and disabled. “They liked the idea, so they sent me to Lourdes,” La Rochefoucauld told CNA during an interview in Rome this month.

The Sanctuary of Our Lady of Lourdes was built on the site where the Virgin Mary appeared to a young St. Bernadette Soubirous from Feb. 11 to July 16, 1858, in a cave-grotto in southwestern France.

Mary identified herself to the 14-year-old Bernadette as “the Immaculate Conception.” During one of 18 apparitions, Mary described to Bernadette the location of a natural spring, and the water which flows from it has been reported to obtain miraculous healings for some of the many people who travel to Lourdes to bathe in it.

After an investigation, the Catholic Church declared the apparitions “worthy of belief.” The shrine receives an estimated three million visitors, including more than 50,000 sick and disabled people, every year.

But on March 17, 2020, the sanctuary was forced to close its doors for the first time in over a century, after France went into national lockdown to slow the spread of COVID-19.

It was at this moment that La Rochefoucauld brought together his love for the disabled and his work creating 3D photos and videos of heritage sites.

He said that the idea behind his Lourdes project and the others was “to make heritage accessible to everyone, because I realized that most of [these sites] were inaccessible to disabled persons.”

The 31-year-old Catholic’s virtual pilgrimage of Lourdes was viewed 53,000 times, from 162 countries, in its first year alone.

He told CNA that the Sanctuary of Lourdes received feedback from people who did a virtual tour and say they now are looking forward to visiting in person.

“Some people tell me if we create a virtual tour for heritage [sites], people will not come, but that’s not true,” La Rochefoucauld said. In his experience, a virtual pilgrimage can give people the desire to experience a place firsthand.

“Virtual will never replace physical visits, I think, especially when it’s about a church and a pilgrimage,” he said.

He tapped his finger on a tablet and laughed as he said, “because of course we don’t have God in [there]... It’s like watching a Mass on YouTube. It’s not the same as being physically in the church.”

La Rochefoucauld’s own pandemic pilgrimage to Lourdes — the two weeks in April 2020 when he painstakingly captured 360-degree images of the shrine’s empty streets and churches — was “very exciting.”

“I was, I think, very, very lucky,” he said, “because at that point, a lot of churches were closed. And maybe I was the only one who had the possibility to visit three churches and a crypt.”

He said that as a photographer, the experience of seeing the Sanctuary of Lourdes empty was “exceptional,” and it was also probably his first time visiting without the presence of the sick and disabled. 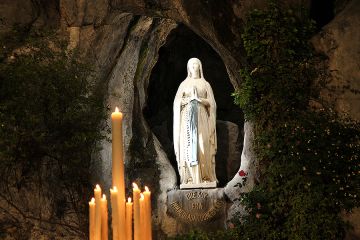 5 fascinating facts about the apparitions of Our Lady of Lourdes

On Feb. 11, the Catholic Church celebrates the feast of Our Lady of Lourdes. In Lourdes, France, in 1858, thirteen-year-old Bernadette Soubirous was collecting pieces of wood as part of her daily chores when she noticed a startling wind and rustling sound. The noise came from a nearby grotto. When Bernadette looked toward it, she saw it filled with a golden light, and a beautiful lady. The initiative will be held throughout July and August. On the feast of Our Lady of Lourdes, the papal delegate for the Marian shrine urged masked pilgrims and virtual viewers alike not to lose hope in the face of sickness and difficulties.