Sharing the truth about the Real Presence in the Eucharist will be a top priority for the Diocese of Cleveland over the next several years, according to the city’s bishop.

“We either need to teach more clearly or be more persuasive about what we believe. Perhaps we must do both,” said Bishop Edward Malesic in a Feb. 10 address to the First Friday Club of Cleveland.

A 2019 Pew Research study found that just 31% of U.S. Catholics they surveyed believe that the bread and wine used in the Eucharist, through a process called transubstantiation, become the body and blood of Christ— a fundamental teaching central to the Catholic faith, known as the Real Presence.

Sixty-nine percent of Catholics that Pew surveyed reported their belief that the bread and wine used during the Eucharist "are symbols of the body and blood of Jesus Christ." This mindset made up a majority in every age group surveyed.

In November, U.S. bishops approved a teaching document on the Eucharist, in response to the survey and pro-abortion Catholic politicians who continued to approach Holy Communion.

The bishops also voted to launch a three-year Eucharistic revival initiative, culminating with a National Eucharistic Congress in Indianapolis in 2024.

Malesic said the Cleveland diocese will host its own Eucharistic revival in the lead up to the National Eucharistic Congress, though he did not provide details.

“My ministry, and the role of every bishop, is to teach clearly and authentically what the Church teaches, including how the sacrament of the Eucharist is administered, prayed, understood, reverenced and how the faithful are transformed by this sacrament,” Malesic said. “We must also teach in a way that changes hearts and minds and not only informs.”

The bishop also spoke about an ongoing effort to renew Catholic education in the diocese. A task force is currently reviewing educational practices in diocesan elementary schools and will present a strategic plan to Malesic in the coming months. The diocese plans to begin implementing the strategic plan in the 2022-2023 school year.

“We have a unique opportunity to set a course for the next five to 10 years and really work to stabilize Catholic elementary schools and help balance the resources in a more equitable manner, focusing on the needs of our children that only a Catholic education can provide, even for those who are not of the Catholic faith,” Malesic said.

“We have an opportunity here to be bold and creative, and to help reshape the system to become vibrant communities of faith that seek to educate and form these young people in the tradition and ways of the Catholic Church,” he continued.

The plan will address only elementary schools, but Malesic said he hopes it will serve as a model for high schools, youth ministry, and adult faith formation programs in the diocese.

Malesic also encouraged Catholics in his diocese to participate in listening sessions for Pope Francis’ Synod on Synodality. The synodal process in the Diocese of Cleveland will culminate in June with a daylong gathering of diocesan representatives. The diocese will compile information from the listening sessions for a national report that will be presented in Rome.

The First Friday Club of Cleveland is a monthly event in downtown Cleveland that features Catholic speakers. Nearly 300 people attended on Feb. 10 to hear Malesic’s address. This was Malesic’s first in-person address to the club. He was installed as Bishop of Cleveland in 2020 and his 2021 address was virtual, due to the coronavirus pandemic. The United States Conference of Catholic Bishops voted overwhelmingly to accept the statement “The Mystery of the Eucharist in the Life of the Church.” 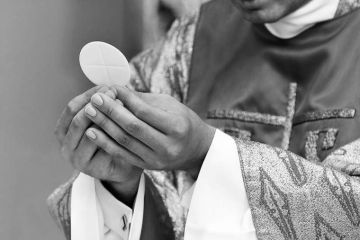