How Michelangelo’s 3 Pietàs speak to a suffering world 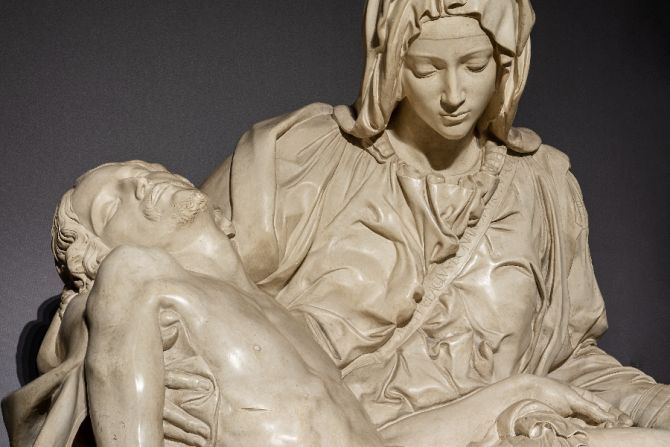 A close-up of the copy of Michelangelo's Vatican Pietà, usually kept at the Vatican Museums. | Ela Bialkowska/OKNO studio.

As war rages in Ukraine and the pandemic lingers, Michelangelo’s celebrated Vatican Pietà — and two lesser-known figures he also sculpted — can be deeply meaningful to a pain-wracked world, says a priest and art historian.

Michelangelo Buonarotti’s Pietà depicts a larger-than-life Virgin Mary as she mourns her crucified Son, Jesus, lying limp in her lap. The masterpiece, carved out of Carrara marble, was finished before the Italian artist’s 25th birthday.

Over the course of more than 60 years, Michelangelo created two more sculptures on the same theme — and a new exhibit in the Italian city of Florence brings the three works together for the first time.

The exhibit opened at the Museo dell’Opera del Duomo on Feb. 24, and includes the Florentine Pietà, also called the Deposition, which Michelangelo worked on from 1547 to 1555, and exact casts, or copies, of the Vatican Pietà and Milan Pietà — which could not be moved from their locations.

Msgr. Timothy Verdon, the director of the Museo dell’Opera del Duomo, told CNA by phone that the gallery wanted to do something to show its solidarity with a Feb. 23-27 meeting of mayors and Catholic bishops.

“The images of suffering that the Pietà always implies I think will deeply touch people. I think that visitors will be moved to see these works,” he said. The image of the Pietà evokes “the personal suffering of mothers who hold their children not knowing if their children will survive.”

The 75-year-old Verdon is an expert in art history and sacred art. He was born in Hoboken, New Jersey, but has lived in Italy for more than 50 years.

“So many of the issues that face the Mediterranean world today are forms of suffering,” he said, “and so this ideal series of images of the God who becomes man [and] accepts suffering, and whose Mother receives his tortured body into her arms, these are deeply meaningful.”

“All human situations of suffering and exclusion invite a comparison with the suffering of Christ, the death of Christ. And [the Pietà] condenses and concentrates a devout reflection on that,” the priest said.

Many years after Michelangelo completed the Pietà displayed in St. Peter’s Basilica, he began his Florentine Pietà, which depicts Nicodemus, Mary Magdalene, and the Virgin Mary receiving the body of Christ as it is removed from the Cross.

The 72-year-old Michelangelo worked on the sculpture for eight years before eventually abandoning it in 1555.

He probably began the Rondanini Pietà, which is in Milan, in 1553. Michelangelo continued to work on the piece until just days before his death in 1564.

According to a press release from the city of Florence, “near his own death, Michelangelo meditated deeply on the Passion of Christ.”

One way this is known is because shortly before his death, Michelangelo gave a drawing of the Pietà to Vittoria Colonna, the Marquess of Pescara, on which he wrote: “They think not there how much of blood it costs.”

The line, from Canto 29 of Paradiso, one of the books of Dante’s “Divine Comedy”, is also the subtitle of the Florence exhibition.

Bringing the three Pietàs together into one exhibit gives the viewer the chance to see “the full range of Michelangelo’s reflection on this subject across 60-some years,” Verdon explained.

Not only is the Renaissance artist’s stylistic evolution on display, but also his spiritual development.

“We know that [Michelangelo] was a religious man,” Verdon said. “His interpretation of religious subjects, even in his youth, is particularly sensitive and well informed.”

According to the priest, Michelangelo seems to have had a range of theological influences.

“His older brother was a Dominican friar and in Michelangelo’s old age we’re told that he could still remember the preaching of Savonarola,” Verdon said.

Girolamo Savonarola was a popular Dominican friar, preacher, and reformer active in Renaissance Florence. He spoke against the ruling Medici family and the excesses of the time, and in 1498 he was hanged and his body burned after a trial by Church and civil authorities.

According to the Catholic Encyclopedia, “In the beginning Savonarola was filled with zeal, piety, and self-sacrifice for the regeneration of religious life. He was led to offend against these virtues by his fanaticism, obstinacy, and disobedience. He was not a heretic in matters of faith.”

“So we’re talking about an artist to whom this subject means a great deal, and which he is also equipped to treat.”

The artist’s last Pietàs were created, instead, in the context of the Counter-Reformation.

The Florentine Pietà was carved during the same period as the Council of Trent, when the Catholic Church issued its decree concerning the Holy Sacrament of the Eucharist, Verdon pointed out.

The council, he explained, “had to rebut the heretical ideas of Protestant reformers, and so it insists, in a decree on the Eucharist published in 1551, that indeed in the bread and wine, Christ’s Body and Blood are truly present.”

“So Michelangelo, who was personally religious, and who, especially in his later period, worked exclusively for the Vatican, was therefore very close to the changes occurring in Catholic thought, Catholic theology, Catholic devotion,” Verdon said.

The exhibit “really gives us the opportunity to gauge the evolution of a theme from one time to a very different one, from the end of the 15th, to the mid- 16th century.”

Verdon said that the Vatican Pietà is the only one of the three to remain in the place it was intended for — above an altar in St. Peter’s Basilica.

The sculpture was originally created for the 4th-century Constantinian basilica, the “Old St. Peter’s Basilica,” which was replaced by the Renaissance basilica standing today.

Viewing art in a church is not the same as viewing it in a museum, the art historian noted.

“Obviously it is different, especially for the fact that the Vatican Pietà has remained on an altar, above an altar, and so the body of Christ depicted by Michelangelo would have been seen in relation to the sacramental body of Christ in the Eucharist.”

“This was true of the first situation in the Old St. Peter’s, the work was on an altar, and it’s true of the present collocazione [position],” he said.

“And actually,” the priest continued, “the same thing was true of both of the other Pietàs. They were intended by Michelangelo to go on an altar in a chapel in a Roman church where he expected to be buried. We think the church was Santa Maria Maggiore.”

“So the relationship of the image of Christ’s body with the Eucharistic Corpus Christi is very important,” he said.

The copies of the Vatican and Milan Pietàs are on loan from the Vatican Museums, and will be in Florence for the Three Pietàs exhibit through Aug. 1.

“And in our museum, in the Florence Opera del Duomo Museum, we have put the Pietà, our Pietà, on a base that evokes an altar, as the very specific Church meaning [of an altar] has to do with the Sacrament,” Verdon said.