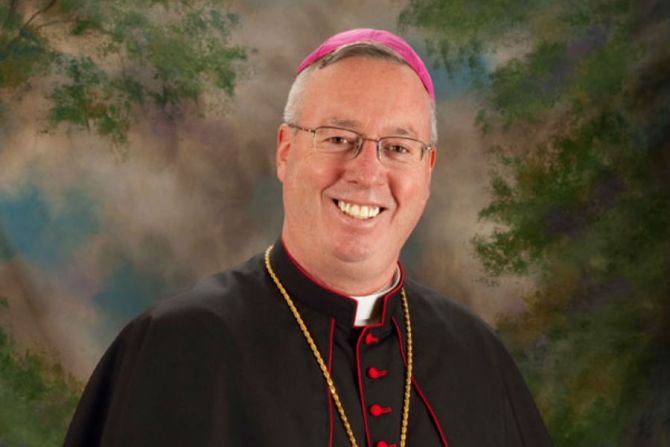 In a letter to parishioners of Holy Family Parish in Springfield, Vermont, Bishop Christopher Coyne of Burlington announced that their pastor is being removed from his position over his continued refusal to be tested regularly for COVID-19 and to wear a mask while ministering, as the bishop had directed.

The bishop also noted that he has invited Father Peter Williams to reside with him, so they "can pray, dialogue and worship together to hopefully change the bad opinion he has of me as his bishop."

“After an extensive process and much prayer, it is with great sadness that I announce the decision to remove Father Peter Williams as pastor of Holy Family Parish for his serious disobedience and disrespect shown to the office of the bishop,” Coyne wrote in a Mar. 8 letter to parishioners.

The “disobedience and disrespect” that Coyne is referring to is Williams’ written refusal to wear a mask and be tested regularly for COVID-19, per his unvaccinated status.

“May I point out that this is about the promise Father Williams freely made to respect and obey the bishop and his successors when he was ordained to serve the Church in Vermont as a co-worker with the bishop,” Coyne wrote.

Coyne said that a “great deal of misinformation has been spread” and has caused division within the parish and has impacted Williams’ ability to minister to “all parishioners.”

CNA contacted Williams for a comment but received no response by time of publication.

Mask wearing and COVID-19 testing were required of all clerics of the diocese who chose not to get vaccinated, as was announced in Coyne’s September 2021 letter to clergy.

In a Jan. 5 video, Williams first announced publicly that he had been refusing Coyne’s orders to wear masks and to be tested. He said that, originally, he chose to keep his correspondences with Coyne to himself for the sake of maintaining normalcy in his parish.

But after Williams’ refusal, he said he received a correspondence from Coyne which stated that he had 14 days to comply, or Coyne would suspend him. Then, he said, his own family joined the diocese in trying to prove that he is physically and mentally unhealthy.

He said it “broke his heart” when his family got involved and the pressure became too much of a burden. So, he turned to his parishioners in the video and asked them to write a letter to Coyne on his behalf stating how they thought he was doing as a pastor and how they would evaluate his mental health.

Bishop Coyne told CNA in a Mar. 8 phone call that he received the letters, but said that over the past two years he has received the same amount of letters from people who have left Holy Family parish because Williams “was not vaccinated and refused to wear a mask and did not encourage people to wear masks in the church either.”

CNA asked for comment on Williams’ claim that the diocese and his family were trying to prove he is unhealthy.

Coyne said that conflict between Williams and his family is unrelated to the decision. “The decision is simply based on the fact that a man who freely accepted the promise of respect and obedience to the bishop and his successors was given a direct order, in obedience, to do something. And he said no,” Coyne said.

Coyne called the situation “very sad” for the parish, the diocese, and himself.

In his letter, the bishop wrote that he has appointed Father Henry Furman, pastor of St. Michael Parish in Brattleboro, as administrator of Holy Family parish “until another priest can be assigned on a more permanent basis.”

If Williams does not leave the parish, Coyne said: “I'm certainly not going to escalate the situation. We'll just let it play out and see where it goes.”

“I'm certainly not one who's going to begin with retaliation or strong arm tactics or anything like that,” he added. “I’m just praying people make good decisions.”

In Coyne’s letter to parishioners, he said that he invited Williams to stay with him at his residence in St. Joseph Cathedral Parish in Burlington “so that he and I can pray, dialogue and worship together to hopefully change the bad opinion he has of me as his bishop and to strengthen the bond of fraternity that should exist between a bishop and his priest.”

When asked if he thinks Williams will accept, Coyne said he hopes he does because “he's one of my brother priests and I don’t want to lose a priest. I need every priest we have.”

In his Jan. 5 video, Williams said that he has canonical rights as a pastor to remain in his post and had hired a canon lawyer to help fight the case until Coyne officially removes him through a canonical process.

In a Feb. 22 video Williams argued that Coyne’s demands violate natural law and the dictates of conscience.

Williams also said that the Church condemns the use of coercion, even if that coercion is used to vaccinate people during a pandemic.

Williams said that “it's undeniable” that at the time he posted his original video, while COVID-19 vaccines were approved under the Food and Drug Administration’s Emergency Use Authorization, that the FDA was acknowledging that the vaccines were experimental.

Williams cited the Catechism of the Catholic Church section 2295 which says that experiments “are morally legitimate when they are at the service of the integral good of the person and of society, without disproportionate risks to the life and physical and psychological integrity of the subjects who must be properly informed and consenting.” Father Peter Williams says the Diocese of Burlington is trying to remove him as pastor of his parish because he will neither be tested regularly for COVID-19 nor be masked. He is asking his parishioners to testify on his behalf, because he says the diocese, and his family, are trying to prove that he is physically and mentally unfit for the job. Some former residents of a long-closed Catholic orphanage in Vermont say they are dissatisfied with the local diocese’s response to their complaints of abuse, while the Diocese of Burlington maintains it has been transparent and helpful.

The Diocese of Burlington has seen a record-low number of priests this year, with only 50 priests in the entire state of Vermont.