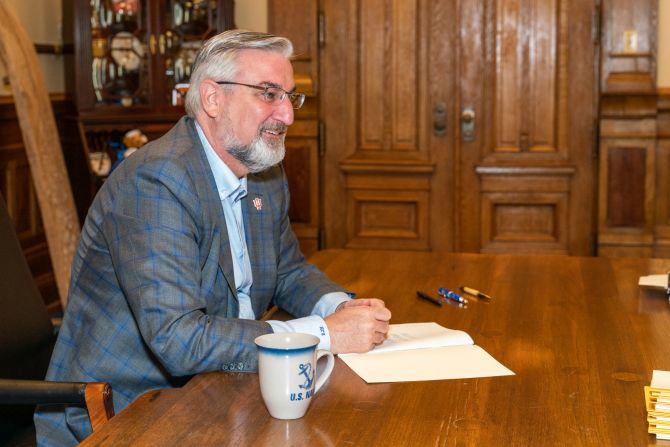 The governor of Indiana has vetoed a bill aiming to prohibit the participation of males in K-12 girl’s sports, saying it “leaves too many unanswered questions.”

The bill would have explicitly outlawed the participation of biological males on sports teams reserved for girls, below the collegiate level. Students or parents would have been allowed to sue the school for violations of the law.

"After thorough review, I find no evidence to support either claim even if I support the overall goal," Holcomb wrote.

The Indiana High School Athletic Association already has bylaws prohibiting the participation of males and females in female-only and male-only sports respectively, but does provide for an exception process for athletes who identify as transgender, which among other things requests documentation from a doctor regarding the person’s transition.

Holcomb also noted that the bill would mandate that every school in the state establish a “grievance procedure” to receive complaints, and expressed worry that the bill is not specific enough about what those procedures should look like, and thus student athletes could be treated differently based on what school they attend.

The Indiana legislature, which is Republican-controlled, has vowed to override the governor’s veto when they meet again May 24.

Alliance Defending Freedom, a legal group that supports religious freedom, denounced the veto and said the governor’s claims about the bill “ring hollow considering that 11 other states have enacted women’s sports laws without any confusion.”

“When we ignore biological reality, female athletes lose medals, podium spots, public recognition, and opportunities to compete. While Indiana’s fairness in sports bill glaringly failed to include protections for athletes at the collegiate level, the governor’s refusal even to protect girls in K-12 is all the more disappointing,” said ADF Senior Counsel Christiana Holcomb.

The ADF lawyer noted that last week a female swimmer from Indiana was knocked down in the rankings at the NCAA Women’s Swimming Championships by a male, Lia Thomas, who went on to claim a national title.

“Where is the governor’s empathy for those talented and courageous women? Regrettably, he has turned a blind eye to the increasing examples of males dominating girls’ athletic competitions,” Christiana Holcomb said.

Indiana lawmakers did not act to restore gender options on driver’s licenses as “male” or “female” after the state Bureau of Motor Vehicles announced it would allow for a third “non-specified gender,” but instead chose to require a changed birth certificate, not a doctor’s note, to allow the change to the driver’s license to take place. Three female athletes and a Christian education association are seeking to intervene in a lawsuit against the Biden administration, over its transgender athletics policy.