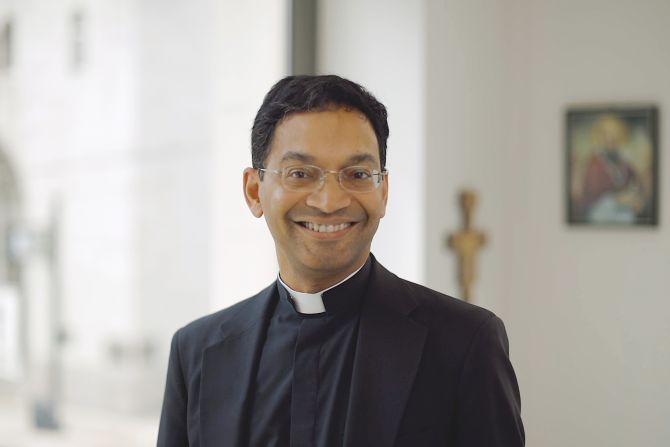 Father Earl K. Fernandes says that when he was growing up in Toledo, Ohio, his mother used to pray that he’d become “a good boy, a tall boy, and a doctor like my dad.”

God had other plans for his profession.

On Saturday, the Vatican announced that Pope Francis has appointed the 49-year-old Cincinnati pastor, the son of Indian immigrants, to be the next bishop of the Diocese of Columbus, Ohio.

The first Indian-American to head a U.S. Roman Catholic diocese, Fernandes succeeds Bishop Robert J. Brennan, who now leads the Diocese of Brooklyn. Fernandes’ episcopal ordination and installation is scheduled for May 31.

In a press conference Saturday morning in Columbus, the bishop-elect spoke at length about the example of his immigrant parents, the experiences he has had being the victim of racial discrimination, and his “synodal” approach to his new role.

“The pope wants a synodal Church, a Church that walks together. I look forward to walking together with the people, the priests, the deacons, and religious — actually, the whole people of God — in the Diocese of Columbus,” Fernandes said.

“I want to walk with the people of God here in the Diocese of Columbus,” he said. “We need to be a Church that walks together, and a Church that listens.”

The son of Indian immigrants who came to the United States in 1970 with his two oldest brothers, Fernandes was born in Toledo and was raised in a devout Catholic family on the city’s south side, a working class neighborhood located near an oil refinery.

In his remarks Saturday, Fernandes said his late father, Dr. Sydney Fernandes, who died in 2019, was a physician and his mother, Thelma Fernandes, was a school teacher in India who later earned master’s degrees in education and social work and worked at a university.

Fernandes spoke emotionally about his parents’ devotion to their Catholic faith and their sons’ education. They urged their five sons (Fernandes is the fourth-oldest, and tallest, he has pointed out) to “work hard, pray hard, and study hard.”

“Having accepted the appointment to the Diocese of Columbus, I have to admit, that after Almighty God and the Holy Church, the people to whom I owe the greatest debt of gratitude are my parents, without whom I would be absolutely nothing,” he said.

“I am grateful for the gift of life and faith that they imparted to my brothers and to me, and for the many hidden sacrifices they made for us boys.”

Fernandes said that, to his knowledge, he is the first Indian-American Roman Catholic bishop in the United States. 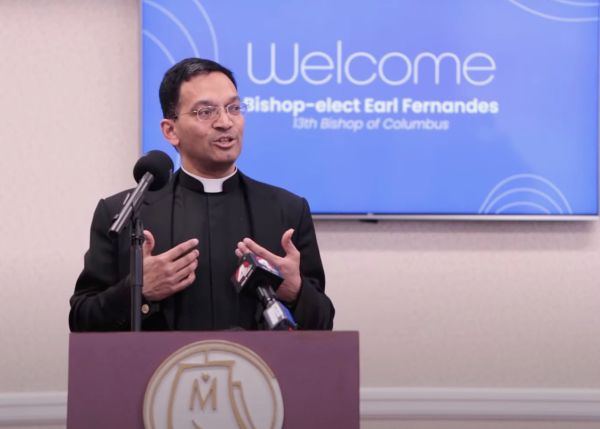 Fernandes said his mother made sure he and brothers started their day with a morning offering and carried rosaries wherever they went. When the boys would go visit their father at the hospital where he worked, he recalled, they invariably would find him either reading in the library or praying in the chapel.

“I think maybe I learned more about life and faith from my parents when I was 5 years old, watching them pray, and praying the rosary every day,” he said, “than I ever did in all my seminary (studies and) doing my doctoral work.”

After earning an undergraduate degree in biology from the University of Toledo, Fernandes initially pursued a career in medicine, enrolling at the University of Cincinnati College of Medicine before discerning a call to the priesthood.

In a 2013 video about his vocation, Fernandes describes a life-changing experience he had as a student traveling through Europe when he visited the tomb of St. Peter beneath St. Peter’s Basilica.

“I was just completely overcome and overwhelmed, and I dropped to my knees and at that moment I knew God was calling me to be a priest,” he recalls in the video.

Fernandes eventually entered Mount Saint Mary’s Seminary of the West in Cincinnati in 1997, and was ordained a priest in 2002. He subsequently studied at the Alphonsianum Academy in Rome, where he was awarded a doctorate in moral theology.

After an assignment to Holy Angels parish in rural Ohio he became dean and assistant professor of moral theology at Mount St. Mary’s seminary, and administrator of Sacred Heart parish in Cincinnati. In 2016 he began a three-year stint on the staff of the apostolic nunciature to the United States in Washington, D.C.

“Throughout my priesthood, people have always asked, ‘Father, what’s your career path?’” he said at the press conference. “I said, ‘That’s the wrong question to ask.’ If you asked me what I’d like to do, I have always said from the very beginning I’d just like to be the pastor of a large parish with a large school and a large youth group. That is enough for me.”

He got his wish in 2019 when he was named pastor of St. Ignatius of Loyola parish in Cincinnati, which has some 3,000 families and more than 1,000 pupils in its elementary school. Fernandes also serves on the Board of Trustees of the Pontifical College Josephinum in Columbus.

In the 2013 video, Fernandes also speaks about his parents' experiences as immigrants.

“My parents encountered many of the challenges that many immigrants encounter, and a lot of prejudice, to be honest,” he says. “And so my mother and father taught us that we have no family in this country, but what we do have is our faith in God.”

The bishop-elect at Saturday’s press conference reflected on instances when he has experienced racial discrimination himself, without going into detail. You can watch the full press conference here.

“And you kind of get this — I don’t know how to describe it, exactly — kind of this warm feeling between embarrassment and rage, and it takes a lot of spiritual and emotional energy to get over that,” Fernandes said.

“It’s not always as easy as saying, you know, ‘Pick yourself up by the boot straps,’” he added.

Fernandes said watching news coverage of the white nationalists’ rally in Charlottesville, Virginia, in August 2017 helped put his own experiences in clearer perspective.

“Look, I experience this at certain points in my life, but other people have to face this every single day,” he said he thought at the time.

The Cincinnati Archdiocese congratulated Fernandes for his appointment and wished him well on its website Saturday.

“Bishop-elect Fernandes enjoys sports, movies and hiking. He is an avid reader and writer and has a particularly strong interest in education, culture and languages,” the statement reads. “Most of all, he enjoys people.”