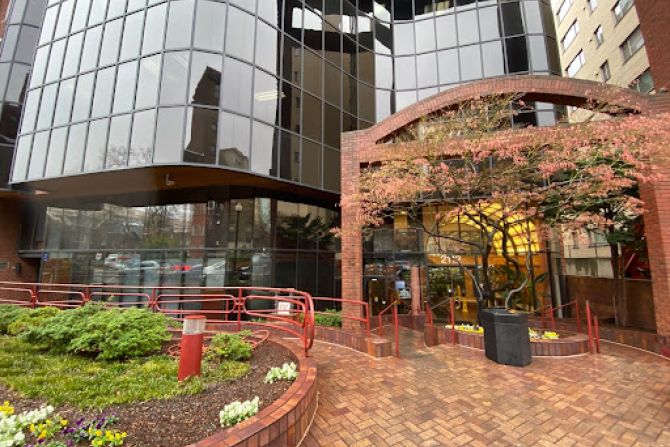 Anti-abortion activists claim the driver of a medical waste disposal truck gave them a box outside an abortion clinic March 25 that contained the remains of 115 aborted babies, but the driver’s employer denies the exchange ever happened.

“My understanding is that there is a camera right out in the front,” one of the activists, Terrisa Bukovinac of Progressive Anti-Abortion Uprising (PAAU) told CNA Thursday, referring to the Washington Surgi-Clinic, the abortion clinic on F St. NW in Washington, D.C., where the box allegedly changed hands.

“So if someone is able to retrieve that footage, they would most certainly see us, although we are at the edge of the sidewalk and in the street — so it just depends on how far the camera can see out,” she said.

“He was right next to the curb, but in the middle of the block, right in front of the building,” Bukovinac said of the driver.

Two cameras appear to be located outside of the building, pointing in opposite directions. One is white, the other, gray.

In a statement, Curtis Bay Medical Waste Services, which operates a medical waste incinerator in Baltimore, denied its driver gave away any boxes from the clinic. The company also said its policy does not allow for the disposal of fetal remains.

But in a Twitter thread Wednesday, PAAU released time-stamped images of cardboard boxes reading “Curtis Bay Energy” by the street curb outside of the clinic. The photos read March 25, at 11:54 a.m.

D.C. officials have yet to comment publicly after members of PAAU announced Tuesday they had intercepted a box from the clinic containing the discarded remains of 115 aborted babies, five of which they fear were aborted in violation of federal laws.

The five babies, who appear to be of late-term gestation, were retrieved by the Metropolitan Police Department on March 30 from a D.C. apartment where they were being stored by PAAU members. PAAU says it arranged for the D.C. police’s homicide unit to collect and examine the babies, fearing that the babies’ injuries could be evidence of illegal abortions.

PAAU and numerous other pro-life groups have issued demands that the D.C. medical examiner perform autopsies on the five babies. The Washington Post previously reported that the medical examiner currently has no plans to autopsy the babies’ remains.

“My desire from the beginning and throughout this whole endeavor was to ensure these victims of abortion violence were given proper burials and funerals and have their dignity uplifted,” PAAU activist Lauren Handy, who identifies as Catholic, said Thursday during the group's rally outside D.C. Mayor Muriel Bowser’s office.

“Right now, the part of uplifting their dignity includes a proper investigation,” she said.

The other 110 aborted babies, which PAAU has said were mostly in the first trimester, have been buried in a private cemetery following a Catholic funeral Mass and naming ceremony, according to the group.

The mayor’s office and the D.C. medical examiner’s office have not responded to CNA’s requests for comment.

The only district official to comment publicly on the case so far is Executive Assistant Chief of Police Ashan Benedict, who said at a March 31 press conference that the five babies recovered “were aborted in accordance with D.C. law” and that an investigation into how the remains ended up in the apartment is ongoing.

Again on Thursday district officials released no information on the case. When asked Thursday if D.C. police typically review nearby security footage for investigations like this, a spokesperson for the Metropolitan Police Department (MPD) told CNA that “we do not discuss investigative tactics.”

Letter gets no response

The PAAU rally Thursday followed the release of a letter from 23 Republican lawmakers addressed to Bower and MPD Chief Robert J. Contee III. It was also sent to Attorney General Merrick Garland.

“These five children, like all children, have inherent value and deserved better than abortion – they deserved life,” the letter spearheaded by Sen. James Lankford, R-Oklahoma, wrote. “But at a minimum, they deserve to have their deaths investigated to ensure that no D.C. or federal laws were broken.”

The lawmakers concluded with seven questions that they asked Bowser and Contee to answer by April 6. Among other things, they asked for autopsies and proper burials for the five babies of later gestation.

A spokesperson for Sen. Steve Daines, R-Montana, one of the signers, confirmed to CNA on April 7 that the lawmakers received no response to the letter.

“The Senator is not surprised they haven’t gotten a response back from Mayor Bowser, Chief Contee or Attorney General Garland but will keep up pressure to ensure justice is delivered,” the spokesperson told CNA. “Unfortunately it may take the Republicans winning back Congress before there could be any committee action but Senator Daines would be supportive of any investigation or hearing looking into these horrific deaths.”

Washington Surgi-Clinic is operated by Dr. Cesare Santangelo, an OBGYN and well-known abortionist in Washington. In 2019 the pro-life group Live Action released a video it secretly recorded in which Santangelo says that he would allow a child who survived an abortion attempt to die if the child was born during the procedure. CNA has contacted the clinic multiple times for comment and has received no response.