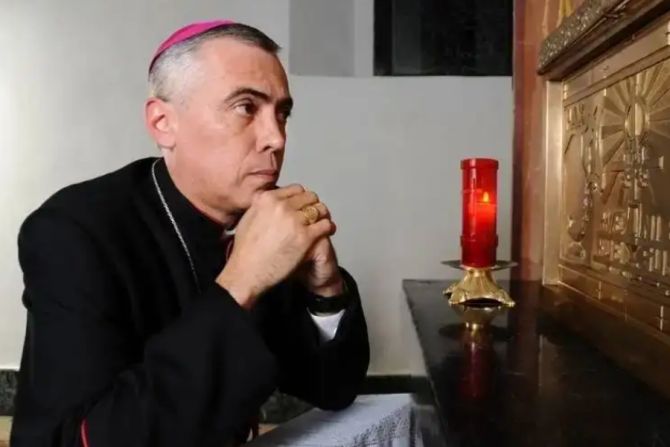 Four priests of the Diocese of Arecibo in Puerto Rico say they were told that Cardinal Blase Cupich of Chicago made a secret apostolic visit there prior to the removal of Bishop Daniel Fernández Torres, an investigation by ACI Prensa has found.

Pope Francis dismissed Torres on March 9. The Vatican has not given any explanation for Torres’ ouster, though Archbishop Roberto Octavio González Nieves of San Juan, Puerto Rico, has said the move was made due to “insubordination to the Pope."

The four priests spoke to ACI Prensa, CNA’s Spanish-language sister news agency, on condition of anonymity, for fear of reprisals. The Archdiocese of Chicago did not respond to ACI Prensa’s requests for comment.

The priests told the news agency that days after Torres’ dismissal, they were summoned with other clergy of the diocese to a meeting with Arecibo’s apostolic administrator, Bishop Emeritus Alvaro Corrada del Rio of Mayagüez.

Questioned about what some saw as Torres’ unjust dismissal, the Jesuit bishop emeritus told the assembled priests and deacons that the Vatican “secretly” had sent Cupich to the diocese as an apostolic visitor to investigate Torres at the end of October last year, the four priests told ACI Prensa.

Cupich visited Puerto Rico between Oct. 25 and Oct. 28 in his capacity as chancellor of Catholic Extension, a U.S. organization that raises funds for projects to help Catholic dioceses in need.

In a statement released on Oct. 28, Catholic Extension said the visit was in connection with an effort to assist Puerto Rico’s six dioceses in the aftermath of recent hurricanes and earthquakes.

"Cardinal Cupich's visit to various Catholic Extension ministry sites in Puerto Rico was well publicized and neither his purpose nor the content of his meetings was secret,” Catholic Extension said in a statement to ACI Prensa. “To present them as such is false.”

One of the priests interviewed by ACI Prensa said Corrada del Rio remarked that "Cardinal Cupich came, and he came as a person who was going to make his report, he made his report and was here for a few days."

Another priest told the news agency that Corrada del Río commented that Torres had not revealed “everything he knew” about his dismissal, “because he was aware that there had been an apostolic visitation” by Cupich.

Torres, however, told ACI Prensa that he was not aware of any apostolic visitation.

"I was never informed nor did I have knowledge of any apostolic visitation to the diocese of Arecibo or related to this servant, nor did Cardinal Cupich indicate anything about it,” Torres said.

"This statement covers not only the recent period but the entire time of my service to the diocese of Arecibo as bishop," he added.

ACI Prensa also sent an inquiry to Corrada del Rio about his alleged statements about a secret apostolic visitation by Cupich.

"I only know that Cardinal Blase Cupich, Archbishop of Chicago, visited the Diocese of Arecibo. My guess is wrong,” he told the news agency.

Lack of due process criticized

ACI Prensa has identified at least two factors that may have influenced the Holy See’s decision to remove Torres.

The first factor was his refusal to transfer his diocese’s seminarians to the new Interdiocesan Seminary of Puerto Rico, approved by the Vatican in March 2020.

The second factor, ACI Prensa found, was Torres’ defense of the right of Catholics to conscientiously object to compulsory COVID-19 vaccination, in accordance with guidelines issued by the Vatican’s Congregation for the Doctrine of the Faith.

Torres refused to sign a joint statement of the Puerto Rican Episcopal Conference asserting that "there is a duty to vaccinate and we do not see how an objection of conscience can be invoked from Catholic morality."

These positions would have led other Puerto Rican bishops to accuse him before the Holy See for an alleged lack of collegiality, ACI Prensa found.

At that meeting with Corrada del Río, several priests criticized the lack of due process in Torres' removal.

One of the priests noted that no bishop in Germany has suffered a similar fate, despite several statements against the teachings of the Catholic Church connected with the country’s Synodal Path. The controversial process is debating sexual morality, the priesthood, and the way in which power is exercised in the Church, among other issues.

Another priest interviewed by ACI Prensa expressed his frustration against what he described as "the sending of a spy, not an apostolic visitation."

"I understand that the apostolic visitation is announced. It is not announced to the four winds, but it comes with an agenda,” the priest said.

"We (the clergy of Arecibo) should have been asked, not only the Episcopal Conference," he added.

"If they did that to the bishop, imagine what they would do to us," one of the four priests told ACI Prensa.

Another said he felt "sad," because "I believe that the Church should not act in an arbitrary manner, I think we all deserve a trial."

"Even if it is me tomorrow, God forbid, I am accused of something as a priest. I would like a clear and fair trial," he said.

This story originally was published by ACI Prensa, CNA's Spanish-language sister news agency. The story was translated and edited by CNA. As Moderna asks the Food and Drug Administration to authorize its coronavirus vaccine for children under 6, the National Catholic Bioethics Center on Thursday updated its guidance on COVID-19 vaccine mandates to include children and vulnerable persons. The Diocese of Knoxville allegedly mishandled a report that a priest sexually assaulted a parishioner who sought grief counseling in 2020, a lawsuit charges. The Congregation for Institutes of Consecrated Life and Societies of Apostolic Life will mediate in a conflict between Archbishop Mario Antonio Cargnello of Salta  and the Discalced Carmelite Nuns of Salta of the San Bernardo monastery.