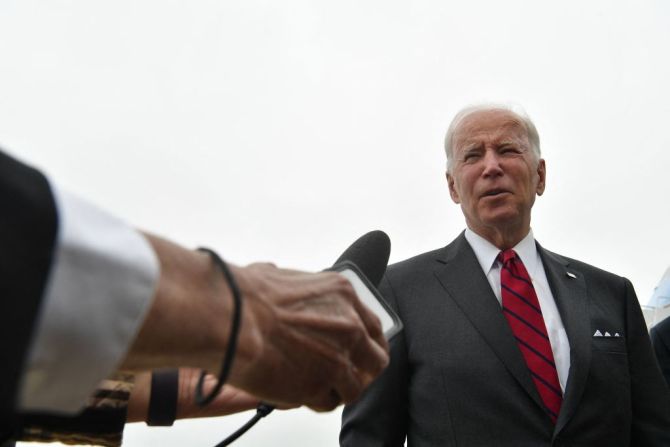 US President Joe Biden speaks to members of the press prior to boarding Air Force One at Joint Base Andrews in Maryland, May 3, 2022. | Nicholas Kamm/AFP via Getty Images

Biden made the statement while addressing a leaked draft of a Supreme Court opinion signaling that justices will overturn Roe v. Wade, which legalized abortion nationwide in 1973.

“Roe says what all basic mainstream religions have historically concluded, that the existence of a human life and being is a question,” Biden told reporters at Joint Base Andrews in Maryland. “Is it at the moment of conception? Is it six months? Is it six weeks? Is it quickening, like Aquinas argued?”

According to the United States Conference of Catholic Bishops (USCCB), the Catholic Church’s pro-life position has remained consistent from the beginning. St. Thomas Aquinas in the 13th century drew from Aristotle, including his theory that the rational human soul is not present at the start of pregnancy, the USCCB says. But, at the same time, the saint rejected abortion as gravely wrong at every stage, calling it a sin “against nature” to reject God's gift of life.

“Quickening” refers to the stage when a woman is first able to notice her baby moving in the womb.

Biden also referred in his remarks to the baby in the womb as a "child," a term abortion supporters generally avoid.

“If this decision holds, it’s really quite a radical decision … It's a fundamental shift in American jurisprudence.” You can watch Biden's full interview in the video below.

The Supreme Court confirmed the draft’s authenticity the following morning, when Chief Justice John Roberts announced the opening of an investigation into the leak suggesting Roe will be overturned.

The president, who identifies as Catholic, supports abortion, which the Catholic Church teaches is a grave evil that destroys a human person with inherent dignity and worth.

“Human life must be respected and protected absolutely from the moment of conception,” the catechism of the Catholic Church reads. “From the first moment of his existence, a human being must be recognized as having the rights of a person — among which is the inviolable right of every innocent being to life.”

Biden has given conflicting statements over the years about when he believes life begins.

“I respect those who believe life begins at the moment of conception,” Biden said in September. “I don’t agree, but I respect that. I’m not going to impose that on people.”

Yet at the 2012 vice presidential debate against Republican nominee Rep. Paul Ryan (R-Wisc.), Biden stated plainly that he believed life began at conception.

"Life begins at conception, that's the Church's judgment. I accept it in my personal life," he said. "But I refuse to impose it on equally devout Christians and Muslims and Jews, and I just refuse to impose that on others, unlike my friend here, the congressman.”

Biden, an earlier statement issued on Tuesday, outlined his plans to protect abortion.

“If the Court does overturn Roe, it will fall on our nation’s elected officials at all levels of government to protect a woman’s right to choose,” the president said. “And it will fall on voters to elect pro-choice officials this November.”

“At the federal level,” he added, “we will need more pro-choice Senators and a pro-choice majority in the House to adopt legislation that codifies Roe, which I will work to pass and sign into law.”

His administration, he said, “argued strongly before the Court in defense of Roe v. Wade.”

“I believe that a woman’s right to choose is fundamental, Roe has been the law of the land for almost fifty years, and basic fairness and the stability of our law demand that it not be overturned,” he said. Chief Justice John G. Roberts Jr. called the leak of a preliminary draft opinion in a pivotal abortion case a "betrayal of the confidences" of the Supreme Court. The liquefaction traditionally happens at least three times a year.