What you should know about this new Catholic saint from India 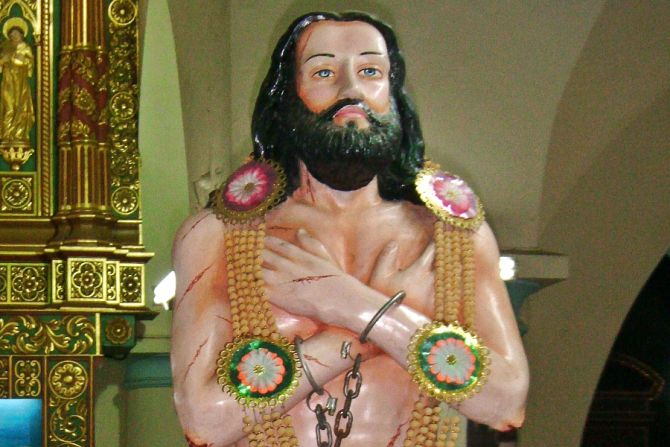 When Neelakanta Pillai was baptized a Catholic in 1745, he knowingly left behind the comfort of his wealthy, high-caste Hindu family for almost certain persecution and death.

“Despite the threats to his life, despite the persecution, despite dangers for his own existence, he was ready to proclaim to everyone that he truly loved Christ, that he was ready to witness and to give his life for Christ,” Father Harris Pakkam told CNA.

Pakkam, the director of the Salesian news agency (ANS), explained that it was only four years later that Pillai, who took the Christian name Devasahayam at his baptism, did experience arrest, imprisonment, humiliation, torture, and eventually death.

On May 15, just over 270 years after his martyrdom, Devasahayam Pillai will be canonized together with nine other men and women in St. Peter’s Square.

“With this moment ... of freshness that is being instilled through this canonization of Devasahayam Pillai, I believe there will be a great revival, great growth, and a moment of great strength for the Church in India,” the priest from India said.

“He is the first Indian martyr, the first Tamil saint, the first Indian layman [to be canonized] ... It’s a great moment of joy for the Indian Church, because of the context that we are living in today, a Hindu man who was punished for becoming a Christian is now elevated to the altars.”

Pakkam, who first discovered Devasahayam in 2012, shortly after the layman’s beatification, said that, while there had been pushback on the canonization from some Hindu hardliners, “the whole of India is rejoicing at this great news.”

“You should know that India is a country with a number of religions, Hinduism, Islam, Sikhism, Jainism, Zoroastrianism, and so on. So the Christians are a very small minority,” he explained. “Christianity came right from the time of St. Thomas the Apostle, though it has not grown much.”

He explained that the Catholic Church in India was in constant dialogue with the other faiths and that it ran schools and charitable activities.

One of the 10 saints who will be canonized this weekend at the Vatican is an 18th century Indian Hindu convert to Catholicism. Dir. of the Salesian News Agency, Fr. Harris Pakkam, tells us about the life of Blessed Lazarus Devasahayam and what drew him to the Catholic faith. pic.twitter.com/bTHZqYGjfS

“Most of the Hindus who have been educated in our institutions are very appreciative of this, of what Christianity has done for them, and definitely even the Hindus who are looking at this event are joining hands with the Christians,” he noted.

“So I think it is a very positive moment and definitely it can also sow a lot of positive seeds among the hearts of the people, especially the Hindus, the Muslims and so on.”

Devasahayam, whose Christian name means Lazarus in Tamil, grew up in an affluent family in what is now India’s Tamil Nadu state. By his early 30s, he had been a soldier, an officer in the court of the Kingdom of Travancore, and in charge of the king’s treasury.

Through this work, he met a Dutch naval officer who became his friend. When Devasahayam began struggling with sadness over difficulties in his family, the officer first introduced him to the Old Testament story of Job and, over time, to Christianity as a whole.

Though conversion was illegal, Devasahayam soon knew he wanted to give himself to Christ. The naval officer introduced him to a Jesuit priest, who prepared him for baptism.

“And once Father Bouttari [Italus] was convinced that this man was not afraid of death, that he was ready even to give up his life for Christ, he says: ‘Let’s go ahead and let us baptize him,’” Pakkam noted.

The priest said that from his baptism at the age of 32, Devasahayam attended church, frequented the sacraments, evangelized others, and spoke against injustices.

Devasahayam’s wife and other family members converted to Christianity following his witness.

“How to live this holiness even in your ordinary family life — this man shows it,” Pakkam said. “He has first evangelized his family, then his friends... his colleagues. And this is what this saint is asking us: How much are you sharing Christ with the people around you?”

Devasahayam was not a mediocre Catholic, but gave 100% to living the faith and proclaiming Christ, the priest underlined.

Just four years after Devasahayam’s conversion, his faith was put to the test when he was arrested on false charges.

Instead of being killed right away, Devasahayam was tied up and dragged through the streets, where people spat on him and struck him with thorny sticks, as a warning to other Hindus to not become Catholic.

He was periodically tortured for years for refusing to submit to the Hindu rites and rituals.

“In fact, the Christians suffering in so many countries in the world, even today experiencing persecution, they should look up to him, draw strength and hope and courage from him,” Pakkam said.

“The story of his martyrdom is really very touching. So much pain, agony, that he suffered for almost three years. And his joy was there in full when he knew that he was going to offer himself for Christ.”

The soldiers guarding Devasahayam were so amazed by him and his faith, and the small miracles they witnessed, that they offered to let him escape. But he declined because he knew they would be punished.

His killers left his body in the jungle, hoping he would be consumed by animals. But after five days of searching, people who knew Devasahayam recovered his remains and buried him in the local church. His tomb is still in the Cathedral of St. Francis Xavier in Nagercoil, southern India.

“I believe that all the agony that he had gone through, over the course of those three years, [gave] a powerful testimony,” Father Pakkam said. “The number of Christians ... increased at a very great level.”

“And so definitely I feel that the suffering that he has undergone and the great patience, the great zeal that he manifested, is a great lesson for us today.”

“For the rest of the world also, this saint can be a powerful intercessor. His commitment, his zeal for Christ can be also a great invitation for everyone to live their faith well.” God's love is the “source” and “destination” of all holiness, said Pope Francis on Nov. 24, speaking of India's newly declared saints ahead of a Mass of thanksgiving in the Vatican. Two new Indian Catholic saints to be canonized by Pope Francis on Sunday were known for their deep spiritual life and their intercession in helping families, say two Catholics who find deep inspiration in their sanctity.