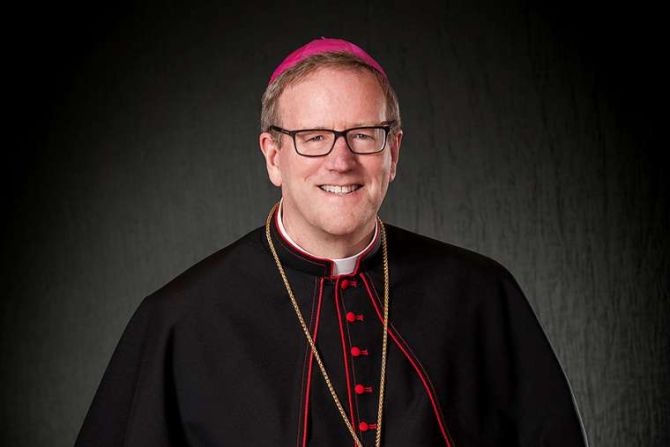 The Vatican announced Thursday that Pope Francis has appointed Bishop Robert Barron to lead the Diocese of Winona-Rochester, Minnesota.

Barron, who runs the popular Catholic media apostolate Word on Fire, has served as an auxiliary bishop for the Archdiocese of Los Angeles since 2015.

He will succeed Bishop John Quinn, who submitted his resignation to the pope after reaching the retirement age of 75 in 2020. Barron will be installed as bishop on July 29.

"Friends, I am overjoyed and humbled to learn that Pope Francis has appointed me the ninth bishop of the Diocese of Winona-Rochester," Barron wrote in a statement after his appointment was announced on June 2.

"The bishop of a diocese is, first and foremost, a spiritual father to the priests and people who have been entrusted to his care. My prayer this morning is that the Lord will give me the grace always to be a good father."

One of the most well-known bishops in the United States, Barron has over 500,000 subscribers on his YouTube channel where he teaches about the faith through talks, interviews, and prayer.

At the last U.S. bishops' meeting in November, Barron was voted to lead the U.S. bishop’s Committee on Laity, Marriage, Family Life and Youth.

Barron, 62, was ordained a priest for the Archdiocese of Chicago in 1986. Six years later, he began teaching at the archdiocese’s Mundelein Seminary, where he served as the rector from 2012 to 2015.

He holds a Doctorate of Sacred Theology degree from the Institut Catholique de Paris and a master’s degree in Philosophy from the Catholic University of America.

While teaching at Mundelein, he created the "Catholicism" documentary series, which aired on public television in 2011.

In 2015, Pope Francis appointed Barron as an auxiliary bishop of Los Angeles, where Barron continued his work with the Word on Fire apostolate.

In recent weeks, Word on Fire has faced claims that the Catholic organization mishandled charges of sexual impropriety by a Word on Fire staffer. Several staff members, including Catholic speakers Jackie and Bobby Angel, announced their departure from Word on Fire amid the controversy in May.

Barron has said that the work of Word on Fire will continue as he moves to Minnesota.

"I look forward immensely to getting to know the good people, priests, and pastoral ministers of the diocese. I will have to brush off my Chicago winter coat, which has remained unused for the past six years in Santa Barbara!" he said.

Barron expressed gratitude for the opportunity to work closely over the past seven years with Archbishop Jose Gomez of Los Angeles, who he called "one of the great churchmen on the scene today."

"Watching him govern the largest Archdiocese in the country was a master-class in ecclesial leadership," he added.

The Catholic Diocese of Winona-Rochester filed for bankruptcy in 2018 while facing more than 100 claims of clerical sex abuse. Quinn said in 2018 that a total of 17 priests in the diocese had been accused of abuse.

Quinn served as the bishop of Winona since 2008 and continued to lead the diocese after the Vatican’s Congregation of Bishops announced that it would become the Diocese of Winona-Rochester in 2018.

The diocese covers more than 12,000 square miles of southern Minnesota and includes 107 Catholic parishes and over 130,000 Catholics.

"I am filled with joy that Pope Francis has appointed Bishop Robert Barron as the 9th Bishop of the Diocese of Winona-Rochester,” Quinn said in a statement on June 2.

"His commitment to evangelization and missionary discipleship will bear great fruit in the coming years.”