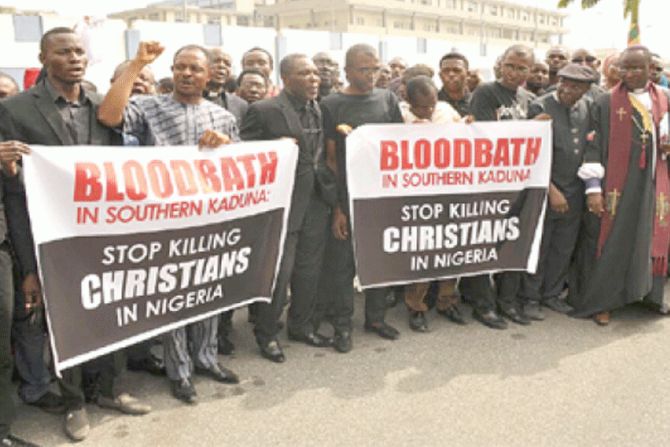 Christians hold signs as they march on the streets of Abuja during prayer and penance for peace and security in Nigeria on March 1, 2020.

More than a week after a devastating massacre at a Catholic church in Nigeria on Pentecost, an advocate for persecuted Christians says that Nigerian Christians largely do not view the U.S. government as a “credible partner” that will advocate on their behalf.

Stephen Rasche, an American lawyer who has worked and advocated extensively in persecuted Christian communities in Iraq and Nigeria, said during a June 13 discussion with Kathryn Jean Lopez of the National Review Institute that Christians in Nigeria continue to joyfully and publicly live out their faith despite the many dangers they face.

"The whole country of Nigeria, and certainly the Christians, are just traumatized at this point," Rasche said.

The official death toll has fluctuated, with initial reports suggesting that more than 50 people were killed, including children, and others injured. The current tally is at least 40 deaths. While the massacre was unusual in size, the incident was “not a one-off, it’s not something new,” Rasche stressed, pointing out that killings of Christians happen “almost daily.”

In Nigeria as a whole, at least 60,000 Christians have been killed in the past two decades — at least 4,650 in 2021 and nearly 900 in the first three months of 2022 alone. Rasche said he recently observed newly ordained priests in Nigeria being told that they need to accept that they could be victims of violence ministering in Nigeria.

Despite this, since 2021 the U.S. Secretary of State Antony Blinken, for as-yet-undisclosed reasons, no longer lists Nigeria as a “Country of Particular Concern” (CPC) on a watchlist of countries with the most egregious violations of religious freedom. The U.S. Commission on International Religious Freedom has been recommending the designation of Nigeria as a CPC since 2009. Rasche said many Christian leaders effectively have given up on the U.S. government, saying that the Biden administration is not viewed as “serious” about stopping the persecution.

Many of the killings of Christians, especially in the northern part of the country, have been attributed to the Fulani, a Muslim nomadic people. Rasche cautioned that the government has a vested interest in shifting blame for the most recent attack away from the Fulani, since the president, Muhammadu Buhari, is a member of that tribe, as are many prominent government officials.

Rasche said that historically there has been some grievance among the Fulani because of lack of opportunities, and a faction has become radicalized that has been allowed by the government to kill Christians with impunity — a practice which many of the country’s Muslims do not condone, he noted.

The location where the Pentecost massacre took place was a great distance from where the Fulani historically operate, Rasche noted, and he said that the claim that this attack was related merely to resources, land, or climate change is "absurd" and amounted to “pouring salt in the wounds” of the many Christians suffering persecution at the hands of their Muslim neighbors.

Rasche and Lopez rejected the idea that the violence in Nigeria does not have a religious component, discussing the recent killing of Deborah Yakubu, a Nigerian university student who was stoned to death and her body burned by a Muslim mob after being accused of disrespecting the Prophet Muhammad in a study chat group.

They also praised Nigerian Christians for their strong faith and “overflowing” churches, holding them up as an example of a joyful living of the faith despite persecution. They encouraged people of goodwill wanting to help to donate to aid organizations such as the Knights of Columbus and Aid to the Church in Need, and to contact their elected representatives to ask why Nigeria was delisted as a Country of Particular Concern. The bishops say “each of us must choose the path of peace and open our hearts to the love that God has for his children.” The bishop said Michael D. Higgins’ ‘reasons for this gruesome massacre are incorrect and far-fetched.’ Escaping the Taliban was only their first hurdle. Now many are stuck in legal limbo.