Padre Pio was canonized on this day 20 years ago 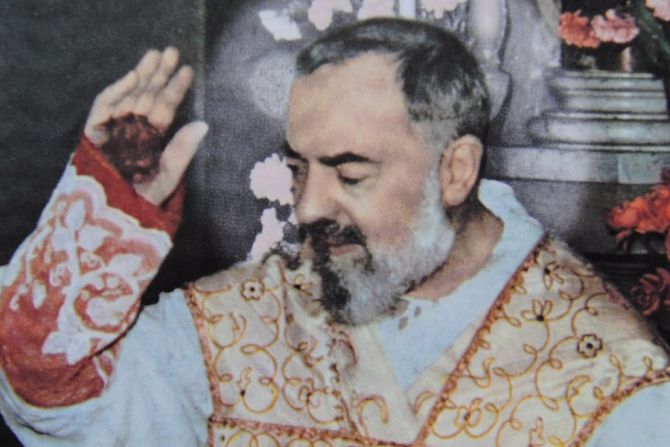 On this day 20 years ago, more than 300,000 people crowded into St. Peter’s Square as Pope John Paul II canonized St. Pio of Pietrelcina, calling his life a witness to the “glory of the cross.”

John Paul II said that the life and mission of the Capuchin friar — more commonly known simply as Padre Pio — “proves that difficulties and sorrows, if accepted out of love, can be transformed into a privileged way of holiness, which opens onto the horizons of a greater good, known only to the Lord.”

“Is it not, precisely, the ‘glory of the cross’ that shines above all in Padre Pio? How timely is the spirituality of the cross lived by the humble Capuchin of Pietrelcina. Our time needs to rediscover the value of the cross in order to open the heart to hope,” the Polish pope said.

On June 16 this year, Catholics marked the 20th anniversary of the canonization in the small southern Italian town of San Giovanni Rotondo, where an average of 7 million people come on pilgrimage to pray at Padre Pio’s tomb each year.

Cardinal Luis Antonio Tagle was originally scheduled to preside over the anniversary Mass, but had to cancel at the last minute due to health problems.

Archbishop Franco Moscone, the bishop of Manfredonia-Vieste-San Giovanni Rotondo, told the congregation that Cardinal Tagle had been unable to come for the Mass after the cardinal’s doctor advised him not to travel after he underwent a laser eye surgery.

In his homily, Moscone commented that Padre Pio, a “little friar who came to this tiny and unknown place over a century ago is now a giant of spirituality and San Giovanni Rotondo is a crossroads of faith known throughout the world.”

Padre Pio is a saint known for his suffering, humility, and miracles. He was born in Pietrelcina, Italy, in 1887 and at the age of 10 already felt inspired to become a Capuchin friar. Shortly after he made his solemn vows as a Franciscan and received his priestly ordination in 1910, he received the stigmata — Christ’s wounds, present in his own flesh.

On the feast of the Assumption in 1914, Father Pio wrote: “In order to succeed in reaching our ultimate end we must follow the divine Head, who does not wish to lead the chosen soul on any way other than the one he followed; by that, I say, of abnegation and the Cross.”

Padre Pio’s reputation for holiness and ministry in the confessional began to attract huge crowds to San Giovanni Rotondo during his lifetime. He was known for his patient suffering, fervent prayer, and compassionate spiritual guidance.

Among those who traveled to San Giovanni Rotondo to have his confession heard by Padre Pio was a young Father Karol Wojtyła, who spent nearly a week in the small town with the Franciscan friar in 1947. He later returned to the town as a cardinal in 1974 (after Padre Pio’s death in 1968) and again as Pope John Paul II in 1987.

At the canonization in 2002, John Paul II expressed hope that Padre Pio’s example would encourage priests to offer the Sacrament of Penance “with joy and zeal.”

“The ultimate reason for the apostolic effectiveness of Padre Pio, the profound root of so much spiritual fruitfulness can be found in that intimate and constant union with God, attested to by his long hours spent in prayer and in the confessional. He loved to repeat, ‘I am a poor Franciscan who prays,’ convinced that ‘prayer is the best weapon we have, a key that opens the heart of God,’” he said.

“Prayer and charity, this is the most concrete synthesis of Padre Pio's teaching, which today is offered to everyone,” John Paul II said.

Saint Pio of Pietrelcina never visited the United States during his time on earth, but now his relics — which include multiple elements from his body — will be visiting Washington D.C. this weekend as they are displayed for veneration at the nation’s largest Catholic church. Padre Pio, who had the physical marks of Christ’s passion on his body, showed Christ crucified to the world, Minister General Fr. Roberto Guerin, OFM Cap., said during a Mass for the saint’s feast on Monday.